In a recent interview in The Independent Sir Colin Davis bemoans that Baroque repertoire has been “hijacked” by specialists, and that he has “heard Bach especially mangled, as though he has no emotional content.” He need not have fretted on this occasion for this was as emotional and gripping a performance of a Bach Passion as one is likely to hear. 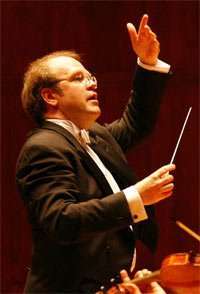 Under Bernard Labadie, Les Violons du Roy used modern woodwind and strings, playing with replicas of period bows, and employing little vibrato. This was supplemented by a continuo group of organ, harpsichord, gamba, and archlute. The resulting sound of this highly polished chamber orchestra is warmer than one is used to from original-instrument ensembles, yet it maintains some of the distinct colors of the Baroque.

Approaching Bach with neither scholarly zeal nor Teutonic reverence, Labadie treated the work as dramatic throughout, presenting the music in vivid detail, eliciting all appropriate effects, while never losing sight of the overall structure and set a perfect stage for Ian Bostridge. Far from being a neutral narrative presence, as often happens, his Evangelist was the major force in bringing this St John Passion to life. His strong tenor rang out magnificently, but he also produced myriad shadings of emotional expression, including ever changing ways of singing “er antwortete” (he answered). The dramatic timing of his entrances was superb, as was his diction; as the focal point of the performance he was a gripping storyteller.

As Jesus Neal Davies delivered his recitatives with similar engagement, as did Hanno Müller-Brachmann as both Peter and Pilate. However, the two arias of the latter were less successful as Brachmann lacked smoothness of line. Nicholas Phan displayed a fine lyrical gift, although his diction could stand improvement. Countertenor Damien Guillon also showed himself to best advantage in his later aria, ‘Es ist vollbracht’, mostly in the second, faster part. It was strange though that he should have been cast for the alto arias when his voice has more of a soprano quality. Karina Gauvin also was an odd choice. Although she sang beautifully, her voice does not quite have the right character for Bach, which became most apparent in ‘Zerfliesse, mein Herze’. She sounded as if she were constricting a bigger voice, when one would rather hear a more innocent, lyrical sound.

After a slightly shaky start the chorus of 31 voices rose to the challenge and sang with precision and vigor, especially in Part Two. Although the choristers were arranged single file around the orchestra, their blend in the chorales was exceptional, and the softer second verses sublime.