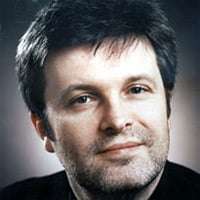 If nothing else, James MacMillan’s 50th-birthday Concert showed just how the music of this composer is both sincere and thought-provoking. Add into the mix the rather dark and brooding Fifth Symphony of Sir Peter Maxwell Davies and the robustly vigorous playing of the BBC Philharmonic and MacMillan will, surely, have woken up with a musical hangover.

The MacMillan works were both particularly moving, the highlight being his Third Symphony, subtitled ‘Silence’, written in 2002. It’s that pressing use of silence that makes this such an effective work, particularly the whole bar of nothing at the central climax of the work where the orchestra builds up frenetically and then stops to breathe. Then there’s the prolonged, almost aching silence at the conclusion of this epic argument.

The piece is inspired by the writings of the Japanese writer Shusaku Endo and, in line with much of MacMillan’s thinking, includes some deep philosophy about the silence of God in the face of worldly inhumanity. This was an immensely energetic performance of highly concentrated score, one fabulously orchestrated, MacMillan utilising the virtuoso BBC Philharmonic to maximum effect. The most memorable moment, though, was the gradual easing of tension towards the end and that long, ‘deafening’ silence at the conclusion.

The haunting sound of the cor anglais, here played by Gillian Callow, is the centrepiece of The World’s Ransoming, written in 1995-6. The use of two plainsong chants – ‘Pange Lingua’ and ‘Ubi Caritas’ – sets this piece, again, in a religious context. It’s part of a triptych associated with the Easter message and deals with the events of Maundy Thursday and the lead-up to the crucifixion. Striking was the harmonised chorales appearing in the brass. Despite the rather frantic orchestral accompaniment it still felt as though several centuries were being pulled together in one massive whole. The rather angular lines of the cor anglais added much to this soul-searching work, despite its rather violent conclusion.

The gentle opening of Peter Maxwell Davies’s Fifth Symphony (1994) opens up a massive musical debate and a considerable struggle. At times, this is a lyrical piece, ever examining and developing the melody. At others, one part is sharply rebuking the other. This was a performance full of rhythmic vitality that was, often, profoundly touching.