In the second-to-last concert of its UK tour, the Bergen Philharmonic (Bergen filharmoniske orkester) touched base with home. Delius’s Paa Vidderne (On the Mountains), an early work that took shape while the composer was hiking in Norway’s Jotunheim Mountains with Grieg and Christian Sinding (of Rustle of Spring fame) in 1889. The initial inspiration, though, was a poem by Ibsen about a young man seeking in the mountains wisdom and a new life. Rapturously sublime and heavy on heroic bombast, it received a wholeheartedly cinematic and florid performance from the Bergen players, with music director Andrew Litton’s possessed conducting egging them on to ever-more ecstatic climaxes. It’s my loss, but I’ll never get on with Delius, even though Litton provided plenty of the taut precision and rhythmic pacing Delius’s music is often denied. The Bergen Philharmonic did it proud, though, swooning from peak to loftier peak and rejoicing in the music’s primary-colour glories. The Anvil did it proud too – to describe the hall’s acoustic as lively is an understatement. I wouldn’t go so far to say that its loudest is painful, but it’s certainly bright and confrontational.

The possibility of humour doesn’t arise with Delius, which you can’t say of Richard Strauss, not even in his monumentally self-regarding Ein Heldenleben, which leaves Delius’s super-manly heroics standing. Where Litton’s approach to the latter had been suitably broad-brush, in the Strauss he was very detailed, yet giving the orchestra plenty of space to explore the score’s many splendours. The result was vivid, to say the least, the narrative of what our Hero did next flowing with disarmingly self-conscious realism.Resistance was futile. Litton carved out the cartoon-like bathos of the crash from the colossal climax of the first section to the nitpicking scratching of the critics in the second with considerable relish, and the burgeoning love music of ‘The Hero’s Companion’ heaved prodigiously under the craftily imagined parade of Strauss‘s wife Pauline’s moods and characteristics – not all of them lovable – from the orchestra’s leader (probably David Stewart). 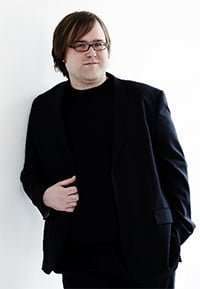 Litton’s command of colour and style and demonically vital conducting honoured the glamour and romance of Ein Heldenleben to the letter, and the Bergen Philharmonic responded with some thrilling, galvanised playing.

In between such macho posturing came Beethoven’s Third Piano Concerto, with Christian Ihle Hadland. I first heard this pianist four years ago on the Bergen Festival’s young artist platform, and he made a strong impression. Now 30, he has gone on to greater things, and I only caught up with him again at his Wigmore Hall lunchtime recital on January 28, a compelling event, with Schubert’s late A major Piano Sonata sticking in the memory for its depth of imagination, breadth of overview and the sort of insight into the music that conjured up that ‘hit’ of connection you get with the great Schubert players – Schnabel, for example. Of course, he didn’t have as free a rein in the Beethoven, but the same sort of natural engagement flowed through the music, and the lively ambiguity of command between soloist and conductor was very satisfying. Among the many things I enjoyed in Hadland’s Beethoven were his varieties of touch and tone, his control of legato, the good taste of his pedalling, the security you get from an artist who has clearly through a piece through, so that everything is related, all based on the sort of intelligent wit that travels easily from dreamy melancholy to sparkling humour. Beethoven’s C minor-mode surprises renewed their freshness, the first-movement cadenza was given with bags of swagger and the finale an infectious, lightly-worn elegance. This exceptional pianist has much to offer.