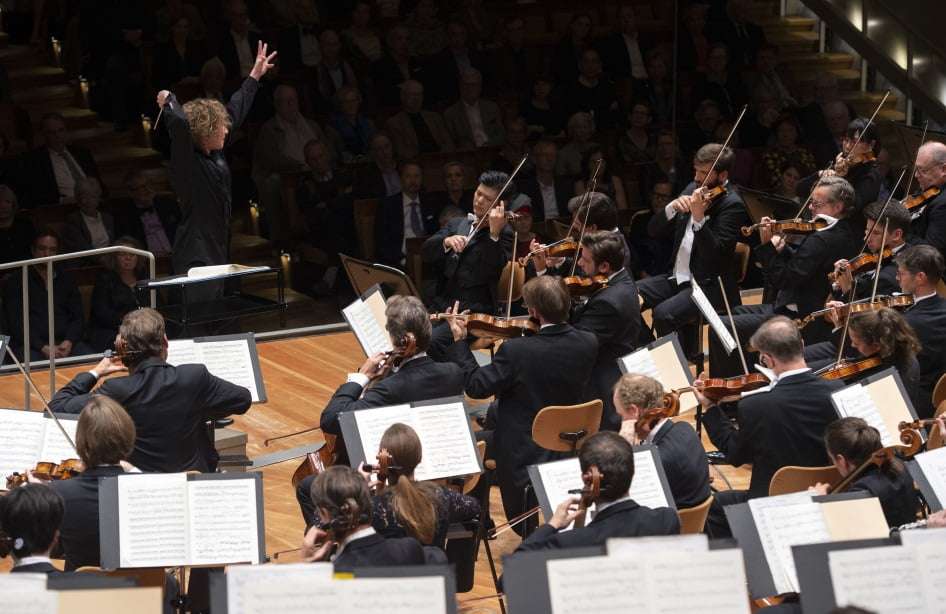 Based on these two final movements, it’s a pity that Santtu-Matias Rouvali (on his Berliner Philharmoniker debut, for the third time this week) couldn’t have conducted the whole of Uuno Klami’s Kalevala Suite (completed in 1943). Klami (1900-61) turned, as he often did, to his native (Finnish) Kalevala (epic poem) for musical inspiration. ‘Cradle Song for Lemminkäinen’ (Sibelius made him a Legend) and ‘The Forging of the Sampo’ (any artefact with magical qualities) both proved pleasing discoveries, the former softly rocking, the latter exuding a reach-for-the-sky radiance and then a clangourous outreach.

After just ten minutes of music (further evidence, surely, that we could have had all the Klami), Alice Sara Ott (also BP debut) settled in for an interesting Ravel G-major, smartly accompanied (for the most part), the first movement’s jazz and languor fully brought out, certainly with particular delight by the pianist come those expressive overlapping trills, who was then so intimate and gently touching with the Mozart-meets-Fauré (as it is sometimes described) middle movement that charges of being too slow were beguiled away, and complemented by lovely woodwinds (happier here for the most part than earlier), although it was at a snail’s pace, the sort of thing that Michelangeli with Celibidache might have brought off to more persuasive effect. Following this ultimately less-than-convincing processional, at least the Finale wasn’t raced through, but rather attractively mercurial and perky, following which a magical Chopin Nocturne, the C-sharp minor, Op.posth.

Rouvali has recorded Sibelius 1 in Gothenburg, an interpretation in progress. In Berlin Wenzel Fuchs intoned the clarinet opening with a degree of mystery to cue a first movement, a few ungainly aspects aside (usually involving brass dynamics), of power and passion, something elemental, a vivid narrative in sound – yet overall, across the four movements too unrelentingly intense (the Scherzo an exception, pointed and bubbly), with little saved in terms of intervention for the fantasia of the Finale (launched with a well-timed and dramatic attacca, it must be said); in other words, he’d already done the imagery aspects and this last movement was on the tame side, making the closing peroration seem too massive. Just how caught up in all this the BP musicians were is a little difficult to say, but they certainly did a professional job delivering Rouvali’s requirements – still ‘in progress’. Acknowledging applause, on receiving a bunch of flowers, Rouvali threw it into the audience as if a missile!