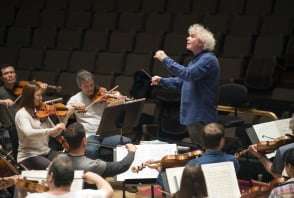 This was the first of two London concerts in Sir Simon Rattle’s parting-company tour with the Berlin Philharmonic, where he has been in charge since 2002. They prefaced Bruckner’s Ninth with the second performance (and UK premiere) of Three Pieces for Orchestra by Hans Abrahamsen, the sixty-five-year-old Danish refugee from the Boulez industry who subsequently moved towards tonality and minimalism. The Three Pieces’ seven minutes’-worth of obsessive fury in the first, a frozen stillness for piccolo, piano and strings in the second, and the third a lament opening on double basses maintaining a dialogue of sorts with aleatoric-sounding clicks and knockings from percussion all set up a concentrated, fractured inner landscape that happened to speak to the drama that was about to unfold in the Bruckner.

One thing that the 2012 “Conclusive Revised Edition” of the Finale to Bruckner 9 (by Nicola Samale, John A. Phillips, Benjamin-Gunnar Cohrs and Giuseppe Mazzuca, attached, presumably to the Nowak edition of the other three movements) demonstrates that the composer never solved what even for worshippers at the Bruckner shrine is his Finale ‘problem’. For me, this boils down to the contrivance involved in bringing earlier themes into a glorious summation. Very occasionally, it works – most recently, in live performance, Andris Nelsons in the Fifth; Haitink, years ago, in the Eighth (using the Haas edition) – and whatever one thinks of the four musicologists’ thirty-year-long application of profound scholarship, inspiration and, minimally, speculation, their version still gives the familiar impression of an unsettling rotation of themes loosely attached to sonata-form, with many pauses, drastic stand-offs between blocks of material, and rising and falling sequences that defer resolution. Deryck Cooke’s completion of Mahler 10 has been with us for nearly sixty years, and many conductors (not Simon Rattle) still don’t go with it.

Since the Bruckner completion was published in 2012, this is its second appearance in London (the premiere was in December 2015, with the LSO and Daniel Harding), which gives an idea of the pace of its progress to mainstream repertoire, despite consistent, stellar promotion from Rattle. There is no doubting the fire behind Rattle’s Bruckner, but he imposes a bit too much control on pace, rather than letting the music’s paragraphs find their own space. He may well have been accommodating the Royal Festival Hall’s lack of resonance, although the timings were broadly in line with those on his recording, apart, interestingly, from the Finale, which knocked off a good two minutes. On the other hand, you can’t beat Rattle for clarity and purpose – you could follow the structure of the first movement like reading a book, even if you didn’t agree his rapid spread away from the opening or the over-emoting rush towards the reprise. The Berliners’ playing was to die for. The ease of ensemble seems based more on a connective trust than a flick of a baton, and can deliver anything from a precise mass pizzicato to the Jackson Pollock-like splashes of woodwind that animate the Scherzo – the Trio in this respect was remarkable, giving the illusion of extreme spontaneity via nerve-shredding accuracy.

The Wagner tubas (not credited in the programme’s orchestra list; ditto Bruckner’s tempo/style indications for the movements – surely listeners would like to know that he intended the first movement, say, to be Feierlich, misterioso, or is that too learned and therefore elitist?) evoked the ultimate in romantic distance for the Adagio, the movement that bears the brunt of preceding the Finale. That the Adagio can hold its own in terms of closure is long-established, with performances that can stretch by five or six minutes to the half-hour mark without remotely stretching credibility. After the reprise of the Tristan-shaped opening, Rattle paced the long process of ascent with considered deliberation, folding in darkness, a sense of effort, deception, doubt and dread with unflagging conviction, until the climactic, shattering discord that changes everything.

Conductors and orchestras have tied themselves in knots to make the relatively short coda sound as some sort of deliverance, a purging altered state. Whether he intended it or not, Rattle gave us a coda as a generic, blissful relief, which is not quite the full story. The playing, though, could not have been more persuasive, starting with the strings bouncing off the double basses’ depth and solidity to a full blast that you suspected had plenty more in reserve, all with that super-connected volatility and passion, which, apart from what you are hearing, is gripping to watch. The Finale could not have sounded more authoritative and well-argued, yet, after many hearings, it is still the coda, the most speculative area of the reconstruction, that gets nearest to vintage, heartfelt Bruckner.