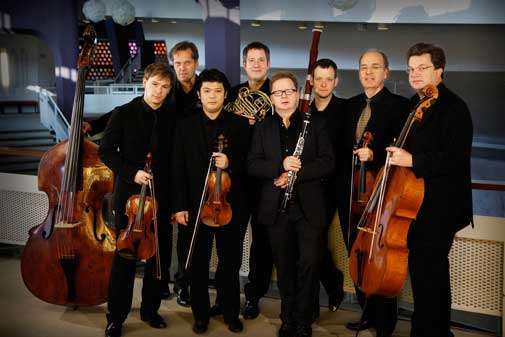 Following three concerts at the Barbican Centre embracing Sibelius’s Seven Symphonies and prior to a double helping of Mahler’s ‘Resurrection’ Symphony (spiced with a little Lachenmann) in the Royal Festival Hall – all presided over by Sir Simon Rattle – eight members of the Berliner Philharmoniker decanted to south-of-the-river, to the Queen Elizabeth Hall to continue The London Residency 2015.

Philharmonic Octet Berlin has been in existence for 70-plus years. Its current line-up is a stellar crew. Five of them – on cello, double bass, clarinet, horn and bassoon – opened with Carl Nielsen. Like Sibelius, Nielsen is also ‘150’ this year and every bit as impressive and individual as his Finnish counterpart. Serenata in vano (1914), written when the composer was on the cusp of his mighty ‘Inextinguishable’ Symphony (No.4), is music for a party, opening drunkenly with some slurring. A slower middle section snoozes peacefully and this short piece is rounded by folk frivolously enjoying a spring morning: such was suggested by this rendition, of which nothing was ‘in vain’ and the music was throughout recognisably the work of the Great Dane.

This charming entrée heralded a move to Sweden, for Franz Berwald’s Grand Septet, adding violin and viola. The underestimated Berwald (1796-1868) may not be a regular in concert programmes, but two of his four Symphonies – ‘Sinfonie singulière’ and the one in E flat – are masterpieces (check out Sixten Ehrling’s definitive recordings on BIS). His Septet is a joy, delightful and unpretentious music, the first movement felicitous and capricious, the slow one blissfully tuneful if a shade autumnal (Berwald typically introducing a mercurial middle section), and ending with an accelerating finale that wears a big smile. Played with warmth and nimbleness, for 20 or so minutes all was well with the World.

Schubert’s expansive, six-movement Octet – for which Romano Tommasini joined his colleagues, all the musicians standing, bar the cellist – received a standout performance. The Adagio introduction was pregnant with anticipation, the ensuing Allegro deft and also malleable, underpinned stealthily by Esko Laine’s bass, the players not shy of dynamic variance. The heavenly Adagio that follows was mellifluously expressed, and its Scherzo successor danced exuberantly. The fourth movement, variations on a witty ditty, was vividly contrasted, greeted by a Minuet that was all courtly elegance, the Trio rustic … and it was straight into the ominous opening of the finale (although cellist Christoph Igelbrink had inadvertently give us a sneak preview before the Minuet!). Once past the shadows we were into the full sails of a sunny day, all was rosy, if something of a contradiction to Schubert’s troubled and illness-prevalent times; in 1824 he was but four years away from a tragically early death.

The Berlin ensemble did him proud. It is invidious to pick out anyone, but special mention should be made of Wenzel Fuchs, whose clarinet constantly beguiled the ear, to Stefan Dohr’s fruity and golden horn timbres, and to Daishin Kashimoto’s gleaming violin sound. The Schubert completed an evening of collegiate and superlative music-making.