Betty Blue Eyes
A musical comedy based on the film A Private Function and the story by Alan Bennett & Malcolm Mowbray, adapted from Bennett’s screenplay by Ron Cowen & Daniel Lipman with music by George Stiles and lyrics by Anthony Drewe 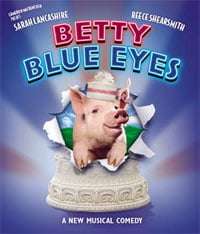 The screenplay for “A Private Function” (1984) was Alan Bennett’s first for the cinema, following many years of writing for television. The film is set in England in 1947, the year of the wedding between Princess Elizabeth and Prince Philip. The war is over but food is still rationed. However, the local dignitaries of the northern town of Shepardsford want to mark the impending royal nuptials with a grand meal for 150 guests at a private function for which a specially reared pig will be the menu’s pièce de resistance. Gilbert Chilvers, the local chiropodist, is trying to make his way in the town by taking a lease on a vacant shop in the high street, much to the chagrin of the town’s doctor. Chilvers’s piano-teacher wife Joyce also has pretensions of being in polite society but is knocked back by her neighbours. To get their own back Gilbert decides to abduct the porker, putting paid to the doctor and his cronies’ plans.

In the film Michael Palin and Maggie Smith play the Chilvers’s in a cast of stalwart actors including Denholm Elliott, Richard Griffiths, Tony Haygarth, Bill Paterson, John Normington, Liz Smith, Alison Steadman, Jim Carter and Pete Postlethwaite. “A Private Function” was directed by Malcolm Mowbray who with Bennett had the original idea for the story. Sometime in 2005 Ron Cowen and Daniel Lipman, two playwrights working mainly for American television, happened to catch a television screening of “A Private Function” and were inspired to turn it into a stage musical. It has taken some six years and getting the musical partnership of composer George Stiles and lyricist Anthony Drewe on board plus impresario Cameron Mackintosh to stage the piece, now renamed “Betty Blue Eyes”.

Betty is the pig, named perhaps after the royal bride. However, when the Chilvers’s pig-nap the beast, it turns out to be more trouble than she is worth. Apart from keeping her out of sight, the abductors have to avoid the meat inspector, Mr Wormold, who paints green any illegal meat products. These shenanigans form the basis of this very welcome, topical and self-styled musical comedy; and, despite being a slightly protracted evening, the show sails home on the sheer charm of its humorous situations. Reece Shearsmith makes his little-man chiropodist an appealing figure under the thumb of his boisterous wife. Sarah Lancashire is a fine musical performer and brings Joyce to vivid life especially when she’s trying to cope with her octogenarian mother who thinks she and not the pig is for the chop – Ann Emery makes the most of her comic chances and is a hoot. Adrian Scarborough’s Wormold is a lugubrious comic turn and, although dressed like a Nazi commandant, he manages to be endearing. The real baddie is David Bamber’s Dr Swaby, the local mayor who has no time for Gilbert’s ‘magic fingers’ as he sees him as a threat. The good supporting company provides a clever chorus of housewives and other local bodies and there are even appearances by 1947’s royal couple. Betty herself is voiced by Kylie Minogue.

Richard Eyre keeps the fun coming and there are some delightfully old-fashioned dance-routines by Stephen Mear that are more knees-up than choreography. The show, faithful to Bennett’s screenplay, has a pleasantly nostalgic feeling and reminds of the London musicals of the 1950s and 1960s by Lionel Bart crossed with the humour of “Dad’s Army”. George Stiles’s music is attractively jaunty and Anthony Drewe’s lyrics are packed with witty rhymes and comic style. The company numbers are outstanding, the opening song ‘Fair shares for all’ being a splendid austerity anthem and ‘Steal the pig’ and the title number are already memorably good. ‘Lionheart’ provides a jolly jitterbug session while ‘A Place on the Parade’ is a genuinely moving song for Gilbert and Joyce as they reveal their aspirations. Avoiding the obvious puns about it bringing home the bacon and that it will have you squealing with delight, “Betty Blue Eyes” is a real achievement in popular musical theatre and should keep audiences delighted for many years.