The Budapest Festival Orchestra’s international acclaim just thirty years after its founding by Iván Fischer and Zoltán Kocsis is well deserved, playing here with deep concentration and unwavering enthusiasm, its impressive tone brilliant in tuttis and glowing in softer passages. The musicians responded to Fischer’s every gesture, his rapport with them so firmly established that sometimes (particularly in the Shostakovich) he simply stopped conducting.

For Shostakovich’s Suite for Variety Orchestra, Fischer began to conduct as he stepped out of the wings, leaped on to the podium and continued without interruption, all to the audience’s laughter. In this abbreviated version of the Suite, Shostakovich’s sense of humor – obstreperous and deliciously witty – came through with unabashed extroversion. Four saxophones and a xylophone added a ballroom quality to the music that relates to the title’s reference to a “variety orchestra” – the type of ensemble that developed during the early twentieth-century for popular dances and musical comedies. After the raucous march to which Fisher made his unusual entrance came a little polka decorated by acrobatic figuration on the saxophones, sneering horns, and jangling antics on the xylophone. During the slow little waltz that came next the saxophones functioned as a gadfly with a solo clarinet flitting overhead. Both orchestra and conductor enjoyed this bit of foolery. 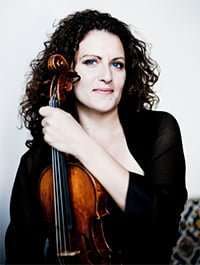 Leonard Bernstein’s Serenade is based upon Plato’s “Symposium”, organized as five movements for solo violin and an orchestra of strings, harp and percussion. Each one attempts to communicate the philosophical conceptions of the meaning of love by members of the “symposium” – Phaedrus/Pausanius, Aristophanes, Eryximachus (the doctor), Agathon, and Socrates/Alcibiades. The violin functions in the role of moderator (Socrates). Replacing Janine Jansen, Liza Ferschtman maintained a rather introverted yet expressive manner that was at-one with the role of overseer. She brought musing serenity to the first movement, even when her flitting solo in the waltz-tune second subject suggested more outgoing expression. The orchestra engaged with assertiveness and spirited energy. Aristophanes’s evocation of a myth of love – somewhat sober aside his usually outrageous comedies – began softly on the violin, becoming livelier, even jocular. The physician Eryximachus’s scientifically oriented view of the physical harmony of body and soul is described in aptly wild scherzando fashion, Ferschtman deftly executing rapid pyrotechnics. The Adagio which follows describes Agathon’s panegyric on love’s powers. Here Ferschtman’s tender expression conveyed a sense of meditative self-absorption. In the finale, after a stark, incisive opening, the violin and a solo cello engage in a sometimes ardent, sometimes somber ‘dialogue within a dialogue’. This interplay is broken off by the entrance of Alicibiades and his comrades in a drunken stupor, increasingly uncontrollable, their raucous behavior becoming a rousing conclusion. Bernstein’s Serenade here sounded fresh and vital.

Finally, an outstanding performance of Rachmaninov’s Second Symphony, the BFO’s strings providing the breadth of sound and purity of tone needed. Even beyond those merits, the orchestra performed with verve, intensity and ardor, with every nuance perfectly expressed and inner voices audible. Fischer elicited all the passion this music calls for. Although the theme of the Adagio was deeply passionate, led by Ákos Ács’s heavenly clarinet solo, Fischer did not weigh it down with unnecessary mannerisms. The soft violin passages that lead to the more intense closing section simply brought me to tears. The energetically paced finale was thrilling.