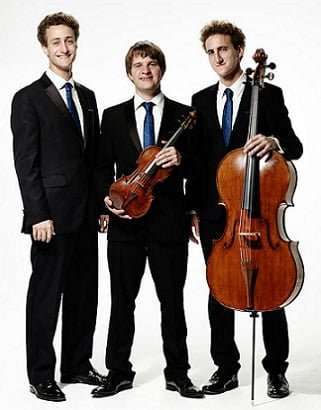 Owing to a cancellation, at short notice the Busch Ensemble found itself playing to a packed Wigmore Hall. And there was a further surprise: cellist Jonathan Bloxham, whose artistry has been an integral part of the group’s success over the past four years, has left to concentrate on conducting. Pianist Omri Epstein’s younger brother Ori has replaced him. Following a couple of private performances, this was the new line-up’s first public recital, courtesy of the Kirckman Concert Society. All three musicians remain as students at the Queen Elisabeth Music Chapel in Brussels.

There were a few tiny signs that they have not yet bedded in, but in general the new recruit acquitted himself well. He had a few opportunities to show his mettle in Schubert’s early Sonata-Movement, where he displayed a focused, firmly drawn line that matched Mathieu van Bellen’s fine violin pretty closely. There was exquisite playing from Omri Epstein, one of those blessed pianists who does not have to grimace and make exaggerated gestures to get his points across. He may, in the most extreme circumstances, raise an eyebrow; but mostly he preserves a Rachmaninov-like calm and concentrates on the job to be done.

Beethoven’s ‘Ghost’ Trio really threw Ori Epstein into the fray and he proved equal to the task. The composer does not provide a Scherzo for this work; and it is essential that the players should inject a lift into both outer movements. This is harder in the dramatic opening Allegro vivace, where Beethoven has the musicians at full stretch and demands con brio on top of everything else. This was an admirable interpretation, very exciting and full of rhythmic life. Omri Epstein produced some wonderful virtuosity, while violinist and cellist went at each other hammer and tongs. There was an exceptional moment of quietness just before the wind-up of the movement. I thought the tempo for the succeeding Largo was just about right. The Busch Ensemble provided the necessary impression of slowness and inwardness, while never getting bogged down: the musicians exchanged responsibilities in a very natural way. And so to the Presto finale, which was lively and exciting, the players throwing phrases about with an abandon that never lost touch with reality.

Tchaikovsky’s Piano Trio in memory of his friend Nikolai Rubinstein has had a mixed reception over the years: certain groups have even cut some of the Variations from the second movement – the Beaux Arts and Borodin members come to mind. The Busch Ensemble gave it complete, apart from the sanctioned cut in the finale. I love the work, although I must admit that Tchaikovsky does rather belabour his ideas in the first movement (‘Pezzo elegiaco’), as if repeating them over and over will convince the listener. He does the same in the opening movement of the Second String Quartet, and although that work does wear me down a bit, I think he just about gets away with it in the Piano Trio.

The Busch Ensemble gave a no-holds-barred performance, with Omri Epstein quite heroic in the massive piano part (yes, there were a few wrong notes, but they were soon gone). Ori Epstein gave his utterances great intensity and Mathieu van Bellen played beautifully, even under pressure. Tchaikovsky was at great pains to say that the Variations were not intended to paint a portrait of Rubinstein but I think he was protesting too much: if the Fugue does not stand for Rubinstein’s academic career, what does it mean? The players had great fun with the various commentaries and then tore into the final Variation which also serves as the finale. They took too fast a tempo – the music is tempestuous but this is, after all, a memorial work that quotes Chopin’s ‘Funeral March’. The players gathered themselves for the coda and the final bars were very moving.

I felt no need for an encore, despite insistent applause, and I was glad Omri Epstein made a gracious little speech explaining that he and his colleagues thought the same.