So far as your correspondent is concerned, this concert proved to be one of the major highlights of the current London orchestral season, now approaching its end. Not for a very long time, and certainly not confined to concerts I have attended since last September, have I been so impressed throughout, with each work receiving performances of the highest calibre. 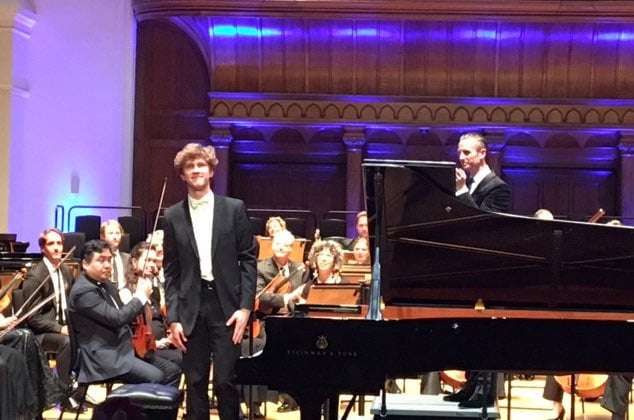 What made this concert additionally memorable and wholly worthwhile were its unexpected aspects in repertoire and artists, although it was as an admirer of Alexander Shelley that drew me to Cadogan Hall, having first seen him conduct, in the same venue, almost seven years ago.

This was not the first visit to the UK for Canada’s National Arts Centre Orchestra, but I had not heard it before. We must give heartfelt thanks to the Zurich International Orchestra Series at Cadogan Hall in collaboration with the Canadian Government for arranging the Orchestra’s appearance.

The evening opened with a cantata, settings of texts in six languages, Golden slumbers kiss your eyes… by the Serbian-Canadian Ana Sokolović, composed in 2015. This substantial score (almost half-an-hour in duration) confounded completely those who might have imagined that such a work, from its demands, circumscribes both composer and her hope for future performances.

In terms of the work’s background and structure, one may read Ateş Orga’s review of the performance given in Essex by these artists two days ago; from the first minute in Cadogan Hall I was held by the imaginative power of this composer, to the degree that one wonders why we have not heard more of her music (Sokolović celebrates her fifty-first birthday this year). Her creative imagination is admirable, her sense of mood and characterisation compelling, and the practicalities of her compositional style are such not to stretch any of the participants beyond their natural abilities or ranges, or to insult them – and audiences – through attempting to appear ‘up-to-date’, although I doubt that this work could have been composed at any other time.

This music has the ring of a genuine creative character running through it, and despite the relative strangeness of a countertenor (David D. Q. Lee’s exceptional range is explored to the full, never pushed beyond its practical and expressive limits) the composer, supported by the belief in her music and the nature of its expression, was honoured by a performance which disabused any preconceived notions. The writing for the solo singer is hugely expressive and natural, even when (in one memorable passage) delving into the lower-depths of his register, and whilst the choral parts occasionally take aspects of such effects as seem to be de rigueur for contemporary composers, Sokolović’s demands never impinge on the impossible or inherently non-musical – here is a completely assured composer, using whatever means she needs, never losing sight of what this compelling work is intended to convey to its listeners.

Thanks to the commanding yet self-effacing control of Shelley, the balance between soloist, chorus and orchestra was consistently ideal. The composer was present to acknowledge the genuine warmth of the capacity audience, having been honoured by a performance that, in the absence of a score, appeared to be profoundly committed and wholly convincing.

Ravel may have found himself, in 1931, in the unusual position of writing two Piano Concertos concurrently, but they could hardly be more different. It may be that the Concerto for Left Hand is the better work – indeed, many regard it as his masterpiece – but the generally lighter tone of the G-major frequently poses considerable interpretative demands for both pianist and conductor, not least in terms of stylistic variety – the conundrum is to fuse these differentiations into a coherent whole. It is the soloist who bears the brunt of these demands, and despite the superficial attractions of popular syntax, there are passages in the G-major Concerto which reveal the influence of the Left Hand work – certainly with regard to the writing for the solo instrument, especially in the first movement.

So, despite a greater degree of popularity for the G-major, many performances fail to some degree to cohere its myriad expression fully, but this account by the truly exceptionally gifted Jan Lisiecki was wholly musical, technically commanding and interpretatively accomplished. In a lifetime’s concert-going and listening to records, I cannot recall a finer performance in terms of brilliance of style in the outer movements and the most beautiful consummate artistry in the slow movement, enhanced – if that were possible – by Shelley’s success in getting the orchestra to reflect Lisiecki consistently. The performance demanded an encore, but none was forthcoming – nor, perhaps, was it necessary in the circumstances.

Brahms’s Second Symphony ended the programme, Shelley conducting – as is customary for him – without a score. This, again, was a performance to savour, the first two movements especially – the first, in terms of structural balance, with the essential exposition repeat observed – given with magnificent breadth and depth, as well as warmth and love. Shelley offered a wonderfully sane and beautifully proportioned account entirely free from exaggeration, not least in holding the tempo in the Finale’s concluding pages superbly. This time an encore was delivered – Brahms’s Sixth Hungarian Dance played in the manner of Monti’s Czardas, given with a terrific sense of fun. If only all orchestral concerts were as good as this.