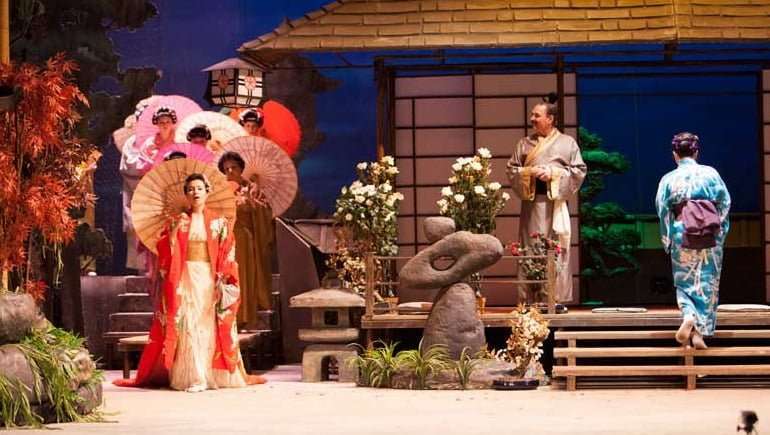 Puccini’s Madama Butterfly had numerous revisions between the disastrous 1904 premiere performance and the fifth and final version three years later. The original was in two Acts, the definitive score has three. Structurally the two-Act edition and that with three is more of semantic relevance than anything else – some productions, as here, join the last two Acts as the composer first intended. This makes for a very long second half but maintains the tension that the composer has ratcheted up since Pinkerton’s departure at the end of Act One.

The criticism that the first staging faced was largely due to Pinkerton’s character: he was a much more offensive figure who makes a joke out of Cio-Cio-San’s culture and calls her servants names. The revisions do their best to soften his personality – even to showing remorse on finding Butterfly dead at the end of the opera, one steeped in a world that thankfully is less and less relevant yet kept alive through the incredible score that Puccini produced. 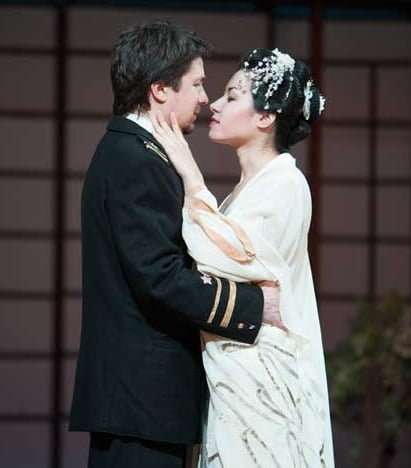 The Regent Theatre was considerably fuller than it had been for Rigoletto the evening before, with Vladimir Dragos (title-role) reincarnated as Sharpless and Cio-Cio-San (‘Cio’ is butterfly in Japanese) was played by Alyona Kistenyova, not involved in the Verdi. The orchestra was now larger and although there were some balance problems, vocalists struggling to be heard, the previous thin sound was mercifully absent and there was some good playing to be heard.

The programme did not make clear which version was being performed though it appeared to be neither the first or last for there were some unexpected diversions including a unison (rather than at the octave) melody in the ‘Humming Chorus’, which was forced and nasal, the orchestra too loud.

Kistenyova was a delightful Butterfly – subdued and coy at the start, confident and passionate in her love for Pinkerton and in her honourable suicide. Ruslan Zinevych as Pinkerton was matched vocally though his physique was less than dashing. Zarui Vardanean as Butterfly’s maid Suzuki was a discovery – her rich and beautiful mezzo-soprano is so delicious at the bottom of the register that you might be convinced she was a contralto. ‘Il cannone del porto’ (often known as the ‘Flower Duet’) was particularly fine, one example highlighting how the two female leads were much stronger vocally than the men.

The final part leads to the discovery that Pinkerton has married an American and wishes to take away the son that he has fathered with Butterfly. An impossible situation, Butterfly agrees to give up her son, and then takes her own life using her father’s knife. Kistenyova judged the final scene convincingly. Pinkerton rushes in to discover Butterfly is dead – too little too late, but that is the storyline and Zinevych was suitably remorseful.

This was a performance that improved as the action unfolded and with the two female leads exemplary. On tour until May 2.