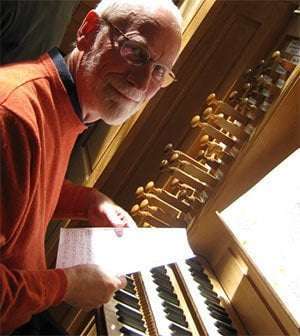 Following the recent overhaul of its 1712 Schrider organ, the Chapel Royal hosted a second recital, this time given by Christopher Herrick – whose series of recordings on Hyperion will be to known many readers. He prefers the term ‘concert’ to ‘recital’, and is in the middle of appearances spanning January to May at the Mariinsky Concert Hall in St Petersburg, where he is playing the complete organ works of J. S. Bach. His Chapel Royal programme was notable for its appealing diversity and promoted by the Chapel Royal’s Choral Foundation, a charity that exists to support the Chapel’s choir, its organ and its centuries-long musical heritage.

The first surprise was a Sonata by Alexandre Guilmant (1837-1911), who was organist successively at Paris’s St Sulpice, Notre Dame and finally La Trinité, where he reigned for 30 years. Guilmant’s style, as evidenced here, does not seem particularly French – it is very much of the mid-nineteenth-century, and shades of Mendelssohn are not too far in the background. But the work’s bold, arresting opening immediately tells the listener that Guilmant’s is an individual voice: his invention is imaginative, skilfully realised and clearly conveyed. The first movement enjoys a reflective middle section to contrast effectively with the surrounding bravura, and is followed by a charming and quiet second, played with great affection by Herrick, who then responded with alacrity to the demands of the finale, with its mainly toccata-like brilliance.

The transcription of Handel’s ‘Arrival of the Queen of Sheba’, by an unknown hand, successfully suggested the original scoring for two oboes and strings, and it was followed by Toccata by the New York-based organist John Weaver (born 1937). This cheerful piece fell easily on the ear and held interest through some intriguing rhythmic devices, skilfully brought to life by Herrick. Derek Bourgeois (born 1941) has written no less than 92 Symphonies and many other works. He was present to hear and acknowledge the enthusiastic applause for his Variations, composed on a theme written by his composition tutor Herbert Howells. Here was another mainly outgoing work that could easily be taken pleasure from, with contrasting episodes and a majestic finale. The Bach Trio-Sonata provided an entirely different experience, Herrick conveying its spiritual and intellectual nature with searching insight.

The final work, Walton’s Orb and Sceptre, written for Queen Elizabeth II’s 1953 Coronation, was played in a transcription apparently contributed to by more than one musician, including the present performer. Originally scored for large orchestra, it isn’t a piece that sits naturally on the organ, and the great difficulties that face the player were apparent here in a slow basic tempo and a good few hesitations when the going became particularly sticky. As an encore Herrick announced that he would play a “silly piece”, written for him by the Norwegian pianist and organist Mons Leidvin Takle. Full of self-mocking fun, its virtuosic nature, brilliantly conveyed by Herrick, brought the evening to a suitably rousing end. On his website, Herrick can be seen playing the Takle and Bourgeois pieces.