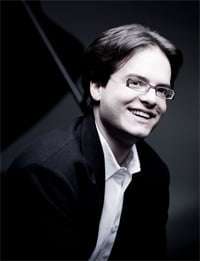 An integral part of the City of London Festival is a three-week series of hour-long, early-evening recitals by BBC Radio 3 New Generation artists. These are given in some of the City’s many Christopher Wren churches, of which St Mary-at-Hill is a particularly glorious example. With no pillars in its central space the acoustic and viewing possibilities are good, and one imagines this building would be ideal as a recording venue. As with many of the churches, however, it proved difficult to locate and proved something of a treasure hunt, even with the aid of a map!

The Swiss-Italian pianist Francesco Piemontesi began with Bach, and an account of the B flat Partita characterised by an unfussy approach to ornamentation, a relatively relaxed choice of tempos and with every element of counterpoint easy to follow. There was a fluid motion to this performance, especially in the ‘Corrente’, while the ‘Sarabande’ took a step back in contemplation. The ‘Gigue’ was lively, though just occasionally Piemontesi’s use of the sustaining pedal obscured detail within this particular acoustic.

That pedal was needed almost throughout Hommage à Schumann, a 2009 tribute by Fabio Tognetti (born 1965). Rich in harmonic content, much of the piece was expressed to the accompaniment of florid arpeggios, which created a strong sense of momentum if ultimately lacking a distinctive melody in its five-minute discourse. Using a page turner operated by his left foot, Piemontesi found the continuity the piece required, and gave an affectionate performance, finishing with first a flourish, and then a moment of brief contemplation.

Schumann himself finished the recital, the 25-year-old composer straining at the leash with the interesting formal concepts of his First Piano Sonata. A big-boned work, it makes considerable technical demands on the performer, to which Piemontesi was equal. From the clipped, ‘fandango’ subject of the first movement’s Allegro section to the questioning idea that makes several appearances in the finale, he was fully in control, and only seldom overdid the sustaining pedal on some of Schumann’s more flowing passages. In fact his was a fine performance, bringing a sense of underlying menace to the lower register introduction, but also finding a strong sense of release in the finale’s closing pages, where his virtuosity could really be let loose. In between Piemontesi gave an affectionate, cantabile account of the ‘Aria’, before successfully negotiating the tricky twists and turns of the scherzo.

As an ambitious encore there was a stirring account of the closing of Stravinsky’s The Firebird, as transcribed for piano by the composer. The foundations of Wren’s church must have quivered slightly, for the final peal of bells rang out with considerable volume!