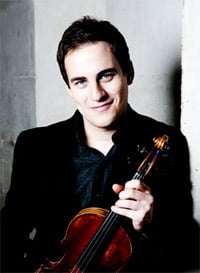 It seemed strangely appropriate to be reviewing a concert in the official “church of the press”, St Bride’s – for a wonderful hour of music-making, though while Jack Liebeck played it was still possible to hear the City in full flow outside, with helicopters, sirens and revving trucks providing a restless backdrop.

Happily, once Liebeck was in full flow he drew the concentration of the audience. Stepping in at short notice in place of Veronika Eberle, who was recovering from illness, Liebeck had a lesion of his own in a troublesome wrist. This could not have been deduced from his performances, however, as he ran through a programme similar to that devised by the original performer. We began with Bach, Liebeck taking time to let each phrase speak, free of mannerisms or excessive ornamentation. The ‘Prelude’ took a while to settle on a consistent speed, but there was real beauty in Liebeck’s sensitively played ‘Loure’, and a touch of rustic charm added to the ‘Bourrée’. Using the acoustic to his advantage, Liebeck allowed the high-register notes to ring out, waiting until the sound had died away, and it this attention to detail that characterised a thoroughly involving reading.

J. S. Bach’s works for unaccompanied violin inspired Ysaÿe to write his own set. The First of Six Sonatas published as Opus 27 is the one to draw most directly from Bach’s example. Liebeck negotiated the tricky Fugue with impressive clarity and assertiveness, while the third movement scherzoso had a graceful charm. The romanticism of Ysaÿe’s writing was immediately apparent, but Liebeck chose to dwell more on the Bach connection rather than opting for a thick, sentimental tone.

Kreisler dedicated Recitativo and Scherzo-Caprice, a rarely performed work, to Ysaÿe – and the connection was clear in reading that featured a full but still attractive tone, leading to a Scherzo that fizzed along, its subject ducking and diving. Before this we heard a remarkable piece of virtuosity in an arrangement of Tárrega’s guitar piece Recuerdos de la Alhambra, a short postcard-piece noted for its virtuosic employment of tremolos. As hard as the eye examined, it was difficult to tell how Liebeck secured a similar sound on the violin, but his bow-control was faultless, picking out the melody amidst the rapid rhythms of the background. To complement his recital Liebeck gave a short and helpful commentary on each piece, and completed the circle with the ‘Sarabande’ from Bach’s D minor Partita (BWV1004).