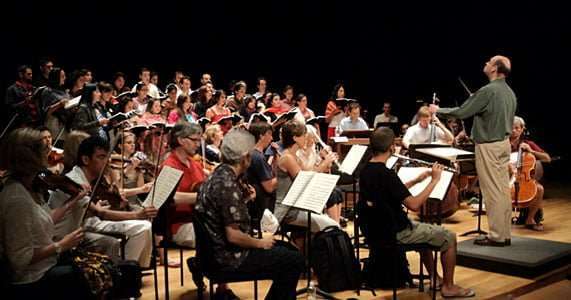 The City of London Sinfonia’s week-long Poulenc festival, held to mark the 50th-anniversary of the composer’s death, spent its first concert examining his chamber music for woodwind. Francis Poulenc planned to write a sonata for each instrument, but did not get around to writing one for bassoon. As this selection of music demonstrated, he was able to combine simplicity of expression with technical know-how to extremely good effect.

Clarinettist Michael Collins led the concert, performing as a pianist for the very first time in accompaniment to Karen Jones and Daniel Bates in the sonatas for flute and oboe respectively. Unfortunately the piano suffered from an unsatisfactory sound, harsh and with dry attack indicating that the chosen Steinway was not in the best of health. As the concert progressed so the instrument’s timbre improved, and Antoine Françoise conjured more poetic phrases from the instrument, particularly in the Elégie and Sextet.

Happily this did not spoil some splendid performances. The Flute Sonata works well in a reverberant acoustic, and Jones gave the breezy melodic lines plenty of room, enjoying also the gentle melancholy of the ‘Cantilena’ and the punchy trade-offs with piano in the finale. The Trio for oboe, bassoon and piano, one of Poulenc’s finest chamber works, fared even better, the memory of its solemn start swiftly erased by a brisk presto. Bassoonist Paul Boyes made a particularly fine contribution to the finale, its freely-running stream of notes broken by a reflective central episode, here with beautiful unison playing.

Mark Paine gave a rather moving account of the tragically early death of Dennis Brain, by way of introduction to the Elégie that Poulenc wrote in response to his death. Both he and Françoise played this deeply felt piece with great attention to detail, the horn’s militaristic outbursts countered by softer passages of reflection before the piece ended in a positive frame of mind. Similarly the Oboe Sonata mixed exuberance and soul searching, and Bates had a beautiful cantabile style for the first movement (also an Elégie), before he and Collins gave out the scherzo with crisp togetherness. The emotional heart of this piece lies in the finale (‘Déploration’), where Poulenc’s tribute to Prokofiev was imbued with touching lyricism.

Poulenc’s music is largely optimistic, however, and nowhere more so than in the high spirits of the Sextet. This was a vibrant performance, very well balanced, with each of the five wind players giving their all, with incisive rhythmic support from Françoise. The jazzy asides and sudden pauses for thought mixed freely and instinctively, the composer’s melodies delivered freshly.

The two pieces by Darius Milhaud, though brief, made a nice complement to his fellow countryman and ‘Les Six’ member. Duo concertant suited Collins perfectly, and his performance with Françoise was full of pizzazz and colour as they enjoyed Milhaud’s ‘nod and a wink’ style of melody, with jazzy harmonies indulged. The Pastorale was touching in its open simplicity, its bright and sunny prelude framing a more angular fugue that nonetheless brought nothing but sunshine.