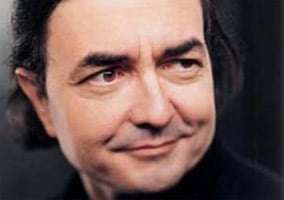 Part of the Roche Commission project in a partnership between The Cleveland Orchestra, Lucerne Festival, and Carnegie Hall, George Benjamin wrote Duet for Piano and Orchestra (2007-8) expressly for this ensemble and Pierre-Laurent Aimard, whom he has known since their student days in Paris.

As stated in the program book, Benjamin has a “keen awareness of the inherently disparate sound qualities of the piano and orchestral instruments” and therefore decided to “find acoustical common ground for the soloist and orchestra.” He does not use violins, and the lower strings are often playing pizzicato, which the composer considers the piano’s “nearest relatives in the orchestra.”

After a short, dissonant piano cadenza, Duet quickly moves on to interplay between piano and trumpet, harp, pizzicato double basses and temple blocks. A pattern soon emerges, at times small sections of the orchestra are paired with different registers of the piano, often tossing back and forth only single pitches; the piano’s low register growls along with the low brass, the top notes converse with the trumpet and flute. However, for the most part the piano remains, in the composer’s words, “an alien figure in the orchestral landscape and often treads an independent path through instrumental textures that can seem intentionally oblivious of it.”

Although it eventually makes its way to a semi-cadenza, this one-movement work of some 15 minutes’ duration is much more concerned with colors and textures than with showing off the soloist. Aimard played the role of the “lonely wanderer” perfectly by alternately coming to the fore in solo passages, conversing intimately with orchestral instruments, or being on his way. Franz Welser-Möst and a scaled-down Cleveland Orchestra were the sensitive travel companions, and the audience warmly greeted the composer at the end of the journey.

The opening movement of Shostakovich’s Seventh Symphony tells a story of a darker kind – the German Army’s march towards Leningrad. Ideally it should impart a sense of impending doom, relentlessly closing in, insistently piling-up ever-greater masses of sound. To achieve this effect the pace has to be absolutely steady. When Welser-Möst started increasing the tempo just before the shift in keys, this effect was utterly destroyed; what should have been tragedy turned into bluster. Adding more ‘effect’, the additional brass had been placed in the Dress Circle, the third balcony (three trumpets and trombones on the right, four horns on the left), high-up and halfway back in the hall. When the trumpets and trombones joined in the fracas, not only did they add a whole other layer of sound, but they also had a difficult time staying with the rest of the orchestra, here and later.

The second movement featured some beautiful solo woodwind playing and a very refined string sound, but what was missing was any kind of atmosphere. Likewise, the Cleveland strings and winds are to be commended for their beautiful and clean execution in the Adagio, but it came across as fairly meaningless.The finale impressed with its closing massive sonorities, producing the inevitable standing ovation, but again it seemed more effect than affect.

An orchestra of this caliber is so finely attuned to the emotional content of a conductor’s gestures and body language that lack thereof equally becomes easily discernible. For the most part this was a monochromatic performance – loud and soft, energetic and energy-less, but no colors, no nuances. Except for the unfortunate change of tempo in the opening movement, Welser-Möst almost metronomically and emphatically gave every beat, hacking the symphony into pieces instead of shaping it into phrases. It is not an easy work to fashion into a whole, but when there is no line, no sense of structure, it becomes more disjointed and rambling than it actually is.