Reviewed: 22 May, 2011
Venue: Above The Stag Theatre, Victoria, London 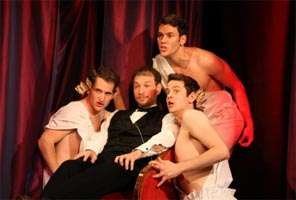 The Cleveland Street scandal of 1889 caused much alarm in Victorian society. On the surface it appeared to be a succession of sexual peccadilloes among young rent-boys and their generally older, richer gentlemen clients. However, when rumours that members of the aristocracy might also be involved, including someone close to the throne, all hell broke loose. The sale of sexual favours by male or female has often been seen as a good little earner. This was probably the main reason why the personnel employed at 19 Cleveland Street in London’s Fitzrovia were recruited from the Telegraph messenger boys employed by the General Post Office at St Martin’s Le Grand in the City of London. The teenage boys delivered telegram messages to all and sundry and while out and about were subject to all kinds of adventures – and misadventures. Although it was considered a desirable job to have, it was taxing work with long hours and all for just eleven shillings a week. 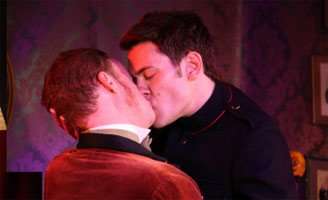 This didn’t stop the boys from being prey to any sort of proposition from the likes of former rent-boy Charles Hammond, the self-styled ‘madam’ who ran the male brothel in Cleveland Street with his French ex-prostitute wife Caroline. It was, however, no seedy dive but a fine town-house well-furnished with heavy drapes, antique furniture, oil paintings, good china, silk sheets and even a grand piano. It became very popular for well-to-do gentlemen with special tastes. Its undoing, however, was accidental and only occurred when the police investigated a petty theft at the General Post Office and how the Telegraph boys earned some pocket money came to light. Hardly anybody took any notice until one newspaper, the North London Press, revealed that members of the aristocracy were regular clients at Cleveland Street. They included Lord Arthur Somerset, equerry to the Prince of Wales, and the Earl of Euston. It was also rumoured that Prince Albert Victor, eldest son of the Prince of Wales, and second in line to the throne, had been a visitor. When the scandal broke, Lord Euston sued Ernest Parke, editor of the North London Press. John Saul, a former male prostitute known as ‘Dublin Jack’, who was employed by Hammond to solicit for clients, gave evidence in the libel case, the result of which was that Parke was imprisoned and the royal scandal subsequently hushed up.

Most of the details can be found in “Cleveland Street – The Musical”, which is both a canny and also quite light-hearted look at the hypocrisy of Victorian society in its attitude to sexual matters. It’s the work of Glenn Chandler who is chiefly noted for creating “Taggart”, the long-running TV detective series. The emphasis on humour is really the only way to handle this topic. There’s no hint that the boys were forced into prostitution, as apparently they had practised on each other at the GPO to gain experience in the ways of the flesh and, of course, they welcomed being paid. 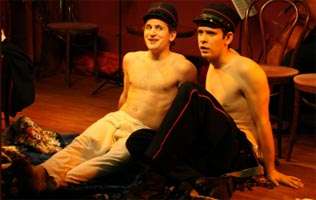 It has to be said that Charles Hammond offered the best in comforts at his home, if only to attract the upper echelon. A glass of champagne was proffered as guests arrived and they were treated very well. The show introduces three young GPO new recruits in the guise of Thomas Swinscow, Ernest Thickbroom and Henry Newlove and they take to the work with gusto. As interpreted by Michael Anderson, Adam Elliott and Ashley Martin they are a spirited bunch as they celebrate the advantages of ‘Companionship’. This is the opening number by Matt Devereaux whose music coupled with the patter of Chandler’s lyrics give the score the feeling of Gilbert & Sullivan. Other songs include ‘There ought to be a law’ in which Saul and Lord Euston ponder the mores of the time; ‘Two madams’ is a duet for Hammond and his wife; ‘Nothing like a lad’ is a paean to the attraction of youth; while ‘Mr White’ (pseudonym for an aristocratic member) extols the delights of the lads in ‘Rum, buggery and the lash’. 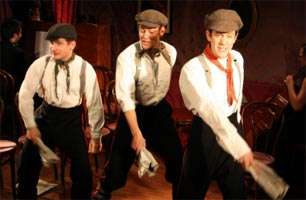 Josh Boyd-Rochford doubles up with valiant versatility as both Hammond and the police Inspector Abberline who investigated the case, with Fanni Compton as his wife, the shrewish no-nonsense Madame Caroline, to whom Hammond was devoted. Paul Brangan gives a smart touch to Saul with something of the Oscar Wilde about him, and Joe Shefer plays an assortment of upper-crusties living entirely for pleasure. As the three Telegraph lads, Messrs Anderson, Elliott and Martin seem to be having a ball, especially when they finish up doing the can-can. The trio of musicians present excellent backing to the songs.

It’s a rollickingly racy show that keeps on the move under the direction and choreography of Tim McArthur. The show is blessed with a lush setting and plush costumes by Fiona Russell. It would be a pity if “Cleveland Street – The Musical” didn’t see any other showings outside of the Stag – it is getting such a genuinely warm welcome from audiences. As it takes such an entertaining look at a rather murky subject, it succeeds in not offending anyone, and that’s a feather in anybody’s cap.