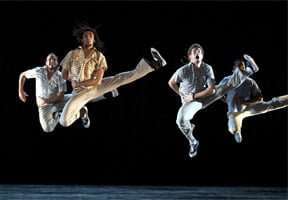 Danza Contemporanea de Cuba’s Triple Bill is revealed as very much a curate’s egg with works which, if not always the most different in style, vary massively in quality and content. Firstly, the good: George Céspedes’s engaging Mambo 3XX1, a reworking of the Cuban mambo tradition and great fun to boot. The message behind this work is the move from soulless automaton movement to a more heart-felt and individualistic way of self expression, a metaphor for the awakening of a generation of young Cubans who want more in their lives than ‘comunismo a la Castro’. Dressed all similarly (women in shorts, men in jeans, all in singlets), they slowly change into more individual and coloured tops to underline their emergent individuality. Céspedes takes the mambo dance vocabulary and peps it up with extremes, disposing his 21 dancers either all together in waves of movement or, most commonly, in pairs. That he includes a touching and simple central section for same-sex couples to a lilting melody underlines the sexual (r)evolution that the youth of Cuba also desire and are enacting. The rest of the music is revved-up, electronic mambo, which powers the impressive dancers who represent Cuba’s rainbow nation ethnicity to a T. It is all terrific fun and closes the programme most enjoyably. 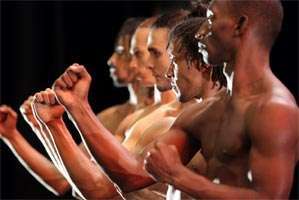 To open, Itzik Galili’s commissioned Olympic-inspired work Sombrisa. The dancers’ strange attire comprised black school gym shorts, white shirts with bow ties for the men, and gym skirts and white blouses for the women, and all wearing boxing gloves. There are a few allusions to shadow boxing, but, that apart, the sports theme is hard to discern. It features high-powered, often extreme movement, calling on hyper-flexibility of the pelvis, but the effect is strangely muted, as pools or corridors of light constantly change in which the dancers perform. They are an immensely committed group with a range of body shapes, and invest themselves with unalloyed focus and pleasure, but ultimately, Sombria outstays its welcome, as the choreographic range shows itself to be limited; movements are repeated without development or meaning. It is all set to Steve Reich’s ultimately tiresome Drumming Part 1, which becomes ‘white noise’ after a short time, but Galili does include some African-inspired movement to echo the score’s evocation of that continent. 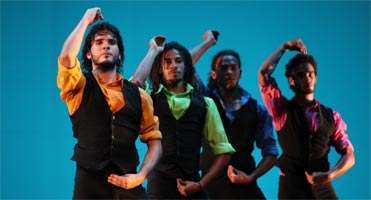 Sombrisa is, however, a masterpiece of invention compared with the middle work Carmen?! by Finnish choreographer Kenneth Kvarnström, an all-male evocation of Merimée’s familiar tale, devoid of merit (an exclamation mark in any title is a sure sign of danger ahead). Kvarnström, a Finn, should have stuck with trolls, lakes and sixth-month darkness rather than attempt this work and this music (excerpts from Rodion Shchedrin’s noisy pots-and-pans re-arrangement of Bizet), for his reaction to them is 20-minutes of depressing vulgarity, adolescent sexual sniggerings and precious little, if any, dance of value; there is movement enough, but it is all a shining example of the worst type of euro-trash vacuity which leaves the bourgeois (and any passing member of the working classes unfortunate enough to get caught up in Kvarnström’s nasty little game) rather more ennuyé than épaté. To spend more time on this worthless junk would be a waste of your and my time; suffice it to say that it is to be avoided at all costs. The company is young, vibrant and immensely likeable – they deserve considerably better.