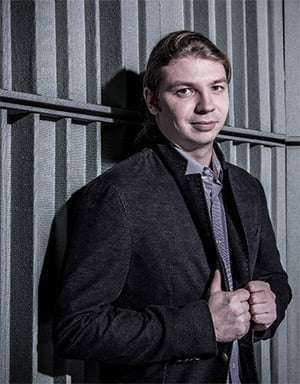 While they are often heard in recital (though the frequency varies considerably between each piece), Prokofiev’s so-called “War Sonatas” are seldom presented as a self-contained trilogy – in line with, say, the final three piano sonatas of either Beethoven or Schubert. By no means ‘late’ and certainly not ‘last works’, much of their fascination derives from having been conceived as a group in 1939 but only realised as a whole as the following decade – during which the Soviet Union became engulfed in the “Great Patriotic War” – unfolded. Among the most consistent in musical content of Prokofiev’s works, they are a testament to his consummate pianism as well as his typically forceful yet oblique manner of expression.

Premiered by the composer, the Sixth Piano Sonata (1940) is often viewed as the most abrasive and uncompromising, yet is also the most Classical in design if not thereby in intent. Denis Kozhukhin set about it in appropriate fashion, though any fear his hard-hitting approach in the initial ‘motto’ theme might be unrelenting proved groundless as this opening movement opened-out onto a wide and astutely varied range of expression, with no lack of impact in the propulsive development or tensile coda. The ensuing intermezzo is no less characteristic in its alternation between the martially acerbic and wistfully inward; qualities that Kozhukhin brought out as tellingly as those of the slow movement, whose underlying ‘slow waltz’ motion underlies music which looks inwardly as acutely as it rises to peaks of expressive passion. The finale brought no falling-off of intensity, its toccata-like main themes driving forward with an abandon such as made the re-emergence of the ‘motto’ theme the more fateful – Kozhukhin ably maintaining momentum both here and in the seismic closing pages.

Given its first performance by Sviatoslav Richter, the Seventh Piano Sonata (1942) has long been the most familiar, though it is all too easily reduced to an excuse for powerhouse virtuosity in lesser hands. Not so with Kozhukhin, who audibly found the balance between motoric restlessness and lyrical entreaty that the opening movement harnesses so impulsively yet resourcefully – not least in a hectoring development and deadpan coda. Despite its ‘warmly’ marking, the slow movement is no oasis of calm – the dark-hued main theme, with its blues-inflected recollection of Schumann, yielding to a central section whose surging anguish was powerfully realised here – before the return of the initial music brings barely a hint of pacification. Most remarkable, though, is the finale – a seamless and cumulative toccata whose unsteady metre and teasing sense of almost-but-not-quite repetition can all too easily spiral out of control, but Kozhukhin kept a firm grip on its pyrotechnics and also effected a startling crescendo going into the ‘home straight’ prior to the brutal conclusiveness of its closing bars.

Premiered by Emil Gilels, the Eighth Piano Sonata (1944) is sometimes seen as marking a rapprochement with the late-Romantic pianism of the composer’s forebears and, as a consequence, with the tenets of Soviet art – though the first movement’s exploratory approach to form and tonal vagueness (as opposed to instability) are arguably more radical than anything in its predecessors; something Kozhukhin evidently appreciated as he steered a sure yet flexible course to its violent central span then on to a coda which banishes any hope of resolution. If this is in essence as much a set of variations as a sonata design, what follows feels less a slow movement than an intermezzo whose restive interludes undermine the elegance of its refrain. Having allowed himself this tenuous breathing space, Kozhukhin amply met the challenge of the finale whose intended resolution is sorely tested by the implacable tread of its central episode before a radiant transition – magically attained – brings a coda whose affirmation remains in doubt right to the last and, as was inferred here, even beyond it.

While one would not always want to hear these three works given as a sequence, the sheer breadth of perspective that it offers on Prokofiev’s protean creativity is not to be gainsaid. For bringing it off with such conviction, Kozhukhin can only be applauded and he had enough in reserve for a limpid account of Bach’s B minor Prelude in Siloti’s transcription as an encore.