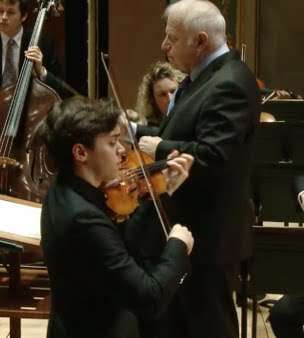 This morning concert (given the night before, too) opened with Nocturnal Procession by Henri Rabaud (1873-1949). Maybe he’s a shadowy figure – a composer who studied with Massenet and a conductor (including a brief flirtation with the Boston Symphony Orchestra) as well as Director of the Paris Conservatoire from 1922 to 1941, for which he succeeded Fauré, and a further connection between those two is that Rabaud orchestrated Fauré’s Dolly Suite, and there are two Symphonies.

Nocturnal Procession, based on a poem by Lenau, is of subtle twilight colours, warmly expressive music with gentle rises in intensity before subsiding to a poetic violin solo and further mysteries of the night, radiantly scored to suggest that dawn is on the horizon; if, one also senses, not without some regret or that a secret is being held by the night-time. It’s a transporting piece whatever the period of day it is heard and sustains its fifteen minutes very well, especially in this dedicated performance.

It was a compelling start to the fifth instalment of the DSO’s French Festival, all being conducted by Leonard Slatkin, and continued with Saint-Saëns’s B-minor Violin Concerto, written in 1880 for Sarasate (at this time of creativity new violin music was composed either for the Spaniard or for Joachim). Renaud Capuçon was booked but was unwell, giving an opportunity to Benjamin Beilman, now in his late-twenties. He has the technical rigour to deal with the numerous challenges if sometimes digging too much into the strings so as to make intonation a little wayward and the uppermost register is conversely somewhat thin.

He has the style of the piece though and didn’t swamp it with bluster or showmanship, finding lightness of touch, lyrical fantasy and apposite flights of bravura in the first movement. The heart of the Concerto is the barcarolle-like central movement, elegantly phrased here. A deft hand from Slatkin prevented mood-breaking clapping to ruin the rapt mood, allowing Beilman to present the expansive Finale as a continuation, music that sings, dances and sprints to one of those serene chorales that Saint-Saëns had divine contact with, and from there to an uplifting conclusion. 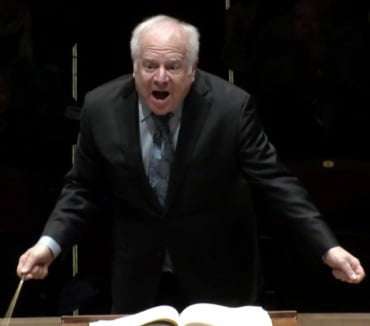 As an encore, Beilman embellished ‘Gavotte en rondeau’ from the E-major Partita (BWV1006) of J. S. Bach, the extra notes not always convincing but it was good to hear a further individual approach to music with as many angles as there are violinists.

As for the Debussy pieces, wonderful. In Faune, Sharon Sparrow’s graceful flute stole in from nowhere to conjure a generously blooming reading rippling with expressive potential and sensuality, flexibly handled and deeply-felt. As for ‘sea symphony’ (my casual description), Slatkin once again proved its master (his St Louis recording for Telarc is one of the best), melding atmosphere, description and design as one, not least for integrating transitions, with tempos well-judged, blends, balances, colours and nuances spot-on. Dawn to midday was made inexorable, the playfulness and passions of the second movement vividly drawn, and, finally, the wind and sea dialogued dramatically and in which Slatkin opted for a fifty-fifty approach to the fanfares that Debussy deleted and Ansermet (who recorded La mer four times) reinstated as ad lib. I have heard some great La mer performances, perhaps headed by Celibidache and then Boulez (both LSO in London), and here Slatkin offered the former’s infinite space and the latter’s clarity, a formidable combination.

No rest for the DSO, for the fantastique French finale is as soon as tonight and the second outing for it is webcast twenty-fours later, starting 8 p.m. local time.