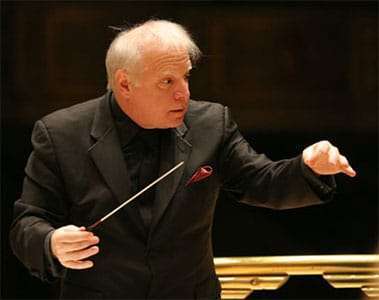 This was a showcase for Detroit Symphony Orchestra soloists. The programme opened with some top-notch Vivaldi, the B minor Concerto for Four Violins. In this buoyant and lively account the players’ touch of romance both in sound and expression brought the work in from the baroque. The slow movement didn’t hang around but remained elegant. Leonard Slatkin – continuo rather than conductor – added some plinks from a harpsichord and the small ensemble of string-players and the solo violinists joined as one for what was an enjoyable family affair.

John Williams’s Flute Concerto, scored for strings and percussion (including piano and two harps), is a fantastical piece, as befits the composer of film-scores so famous as to not need mentioning – Star Wars, Superman, the Indiana Jones movies, Schindler’s List… – and exudes a mosaic of tone and texture, but expressive too, with something of sci-fi suggestiveness (a close encounter of some kind) and focussed in length, just right at about 15 minutes. The final section finds Williams advancing to the concert-hall away from the silver screen. David Buck brought a brilliant-light and dancing dexterousness to the solo part. Later in the evening Williams’s Tuba Concerto featured Dennis Nulty, a smooth and confident performer, nattily dressed, and finding with ease the agility needed for this outgoing piece, yet also intensely lyrical with a purr when required, the orchestra intricately entwined with its big-brother soloist, and in the slow movement there were some poignant contributions from woodwinds, not least cor anglais (English horn) and flute. The trumpets’ fanfares announcing the finale had me – strangely – thinking of the corresponding part of Glazunov’s (delectable) Violin Concerto. Williams then goes in a different direction, no less attractively in his rhythmic guile, something that Nulty brought off with alacrity. Here and elsewhere Williams’s ‘internal counterpoint’ (for want of a much better description) recalled Hindemith – all to the good – and the Concerto stalks to a rollicking close.

What Wang Jie’s 17-minute Symphony No.2 lacks in substance it makes up for in atmosphere and colour, the dawning of a new day, maybe, in its opening measures. In the context of this concert there were numerous star-turns from within the orchestra (not least for concertmaster Yoonshin Song), but soon this more tone-poem/concerto for orchestra began to meander and rely too much on gesture for all the keen ear for detail (but the palette became dulled) displayed by this lady composer, and you need to be female to receive a Lebenbom commission.

As for Scottish-Canadian composer Allan Gilliland’s ‘Celtic’ Harp Concerto, while scenic (a leprechaun or two came to mind, and the solo instrument’s roulades conjured a waterfall), it was somewhat repetitive – a phrase played four times is as close as I wish to get to minimalism – but there was a charming folksong-like melody in there – ‘My love is like a red, red rose’ – Scottish, the words by Robert Bruce. But, nice as this, and excepting Patricia Masri-Fletcher’s musicianship and virtuosity, it doesn’t really adapt to film-music lavishness and was too dominant of this short (11-minute) rather rhapsodic piece as a whole, Mr Gilliland not really betraying an identifiable personality.

You know where you are with Elliott Carter (1908-2012) though. He took a stance and stuck with it; he let his audience find him. (I did many years ago with the stunning Concerto for Orchestra as recorded by Bernstein.) ‘Remembrance’, the second of Three Occasions, features a trombone solo in this darkly lyrical if restless requiem for a benefactor, yet for all Kenneth Thompkins’s eloquence, poise and guttural illustration, I can’t help feeling that he should have played from his ‘usual’ seat rather than as a front-of-stage soloist for what is the central panel of an orchestral triptych. Wonderful piece though with much to say.

Benjamin Britten’s classic Purcell Variations and Fugue closed the concert (YPG when there’s a narrator). No speaking role on this occasion, although Slatkin would have been a perfect mein host. The DSO certainly got this music by the forelock with superb solos, estimable ensembles and terrific tuttis, and what a brilliantly characterised work this is, perfectly capturing each instrument. The final Fugue, the orchestra put back together, is a tour de force and here scintillated to a grandstand finish, Henry Purcell’s Abdelazar tune resounding in glory. A Detroit triumph, Slatkin beaming.