Given Dicapo’s penchant for presenting works by Puccini – it has performed all his operas and instrumental music – it was no surprise that its new production of “La bohème” was admirably sung and wonderfully staged. 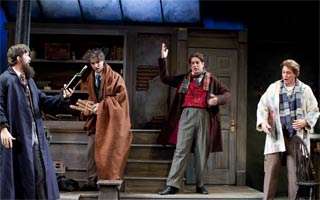 The production is a traditional one, set in Paris circa 1830 and with costumes and sets reflecting the period. The garret scenes (Acts One and Four) remarkably convey what cold is, and that sense is allowed to permeate the opera. It is the main antagonist in Act Three (with Rodolfo’s jealousy of Mimì close behind), a diaphanous screen hung at the front of the stage with falling snow projected on to it. Acts Two and Three are masterfully combined, with the sets of Act Two fluidly changing into those of Act Three. Act Two is always eagerly anticipated, and Dicapo’s Café Momus does not disappoint. The relatively large stage is filled to capacity with all types of picturesque and picaresque personages: townsfolk, shopkeepers, street-vendors, soldiers, waiters, children, the four bohemians, Mimì, Musetta and, of course, Café Momus itself.

Of all the singers, Christian Reinert (Rodolfo) was the only weak one. His voice at times was gravelly and forced, not always pleasant to listen to, and his acting was occasionally rigid and static. But he did acquit himself nicely in the final stanzas of ‘O soave fanciulla’ where his voice rose beautifully to a dreamy ending as Rodolfo and Mimì drifted off arm-in-arm to the Café Momus, and their voices faded into the distance. He also sang with a clear voice and showed determined acting in the Act Four duet with Marcello, ‘O Mimì, tu più non torni’. ‘Che gelida manina’ was sung with enough required pathos but lacked the conviction the aria demands.

Maria D’Amato (Mimì) was a gem, her singing and acting top-notch. ‘Mi chiamano Mimì’ was sung with grace, beauty, and intelligence; in Act Three, D’Amato sang the arietta ‘Donde lieta usci’ gorgeously and with just the right amount of emotion – as she did Act Four’s duet with Rodolfo, ‘Sono andati?’. Stephen Hartley (Marcello) has a mellifluous voice which he used to wonderful effect, and his acting was splendid. He sang Marcello’s Act Three duet with Mimì, ‘O buon Marcello, aiuto!’ with incredible surges of feeling.

Olga Xanthopoulou (Musetta) was an absolute delight, her powerful melodious voice with its wealth of inflections and her natural acting talent enthralling. Her burlesque approach to comedy was most effective, especially in her sassy handling of Alcindoro in Act Two. ‘Musetta’s waltz’ was magically sung, while her part in the Act Three quartet ‘Addio dolce svegliare alla mattina!’ was electric.

The adult and children’s choruses sang and acted superbly, exuding an energy and panache that enchantingly intertwined with the dominant theme of sorrow in the opera. Samuel Bill handled the driven emotions of the music naturally and with flair; where passion was necessary, he and the orchestra marvellously evoked that; where nuance was required, that, too, was expertly supplied. Puccini was a master of romantic verismo, and it was on full display in this performance