Pasatieri
The Martyrs – Opera in two acts to a libretto by Daphne Malfitano [world premiere; sung in English]

Bypassing the oft-acrimonious debate over which is more important in opera, the words or the music, Thomas Pasatieri’s The Martyrs expertly melds both into a cohesive whole. Each of its two 40-minute monodramas has one singer performing on a raised platform with a lone chair at its center and a pianist in the orchestra pit, making for a brilliant symbiosis of music and words in which the themes of love, revenge and justice are starkly apparent.

Zeffin Quinn Hollis sang with intensity, beauty, and crystalline diction as Percy, a death-row inmate who, although feeling abandoned by God, addresses an unseen priest in the empty chair, confessing in vivid terms to a brutal murder. Then, seated, he is electrocuted for his crime. In the colloquial language of an uneducated man, Percy tells of a chance encounter with a woman who had been physically abused by her companion. After spending a night with her, Percy set out for revenge against her abuser, beating him to death. There were many brief moments of outstanding unaccompanied singing, which impressively added pathos and dignity to Percy’s confession. His final words before going to his death were, “I wish things happened different. But it was worth it … it was worth it. Warden – let me go.” 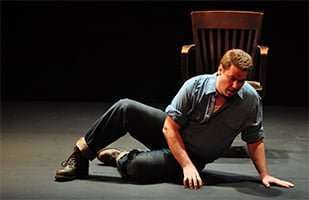 As Percy, Hollis was simply dressed, in jeans and a light-blue work shirt, and Susan Roth’s lighting was generally subdued. Daphne Malfitano’s direction was also sparse, with Percy moving infrequently and remaining near to and looking at the empty chair – until he sat in it for the execution, the music here being numbing – a steady pounding on the keyboard to the writhing of Percy’s body as electricity coursed through it, optically and acoustically reminiscent of the heartrending sounds of the guillotine decapitating one nun after another at the end of Poulenc’s Dialogues of the Carmelites. 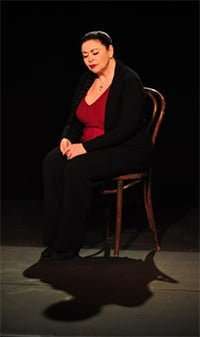 In Act Two, Catherine Malfitano, as Marianne, narrated a rather different tale of murder and revenge. Many years ago her lover Alton of five months was murdered. Marianne, under an assumed name, became a prison guard in order to take revenge by killing her lover’s jailed slayer, Jackson Andell. But one day, when three prisoners threatened her and no other guards were nearby, Andell – Christ-like in appearance – chased the attackers away and saved her life. Having discovered that her savior was her lover’s murderer, Marianne was unable to kill him, or even hate him, eventually coming to believe his protestations of innocence. A month later she entered his cell and “took his face in my hands and kissed it, and kissed his hands and forgot Alton and thought of no one but Jackson Andell”. On reading the transcript of Andell’s trial, she learned that he had confessed to Alton’s murder, and she never saw him again.

The tale ends with a twist. Marianne says to the empty chair: “So you see now, my darling, why I never could tell you … why I never explained who your father was, when all these years you asked me and I could never tell you? But you are old enough to know the truth about him. And the truth about me. That we both made mistakes, and we both loved. And you are old enough now … I hope … to forgive me.”

Malfitano sang with great depth and passion and impressive vocal range, and acted with star presence as she moved about the stage, at times crouching on the chair. Marianne’s role was rather more physical than Percy’s, her costume was more colorful – brilliant black pants and jacket, including a large crucifix around her neck – and Roth’s lighting was less subdued. Unfortunately, Malfitano’s diction was less than clear at times, and there were no titles to help out.

The libretto by Daphne Malfitano (Catherine’s daughter), which makes redemption the true protagonist in each act, is a force to be reckoned with, and in her directorial debut she was wonderfully frugal, allowing the uniting of words and music to have their full impact. Pacien Mazzagatti played masterfully, fully capturing the dissonance and melodic lines of the music. He was the third character in the opera, connecting Percy and Marianne to each other even though they never met.