Menotti
The Saint of Bleecker Street – Opera in three acts to an English libretto by the composer [sung in English, Italian, and Latin, with dicapotitles] 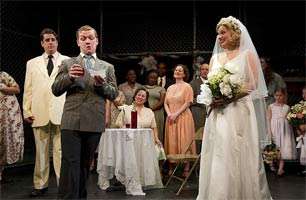 It is not surprising that Dicapo would be the opera company to bring back “The Saint of Bleecker Street”, which had its last appearance in New York City two decades ago. “The Saint of Bleecker Street” premiered in 1954 at the Broadway Theater and ran for 92 performances. Gian Carlo Menotti won his second Pulitzer Prize for Music for the opera in 1955 – the first was for his first full-length opera (“The Consul”, 1950) – and his second New York Drama Critics’ Circle Award for Musical Play of the Year – the first was in 1954, also for “The Consul”. “The Saint of Bleecker Street” is a prime example of what can be called American verismo: it deals with the intensely Catholic Italian immigrant life in Little Italy in Manhattan and covers such issues as stigmata, religious visions and voices, agnosticism, superstition, inherent passion and violence, and murder – quite a heady brew, but which is masterfully managed in this production with expertise, candor, and vigor.

With a large orchestra – although at Dicapo it is some 30 members strong – and significant use of the chorus, the feeling is that of Grand Opera, a dramatic masterpiece. The singing at this performance was splendid, with the chorus giving resounding, stimulating renditions of Latin prayers, especially in Act Three. Kristen Sampson was astounding, her singing effectively booming and subdued, and her crystal-clear top notes so wonderfully conveyed Annina’s religious rapture. Her middle- and low-range were handled with great command and exultation. She was definitely a woman in the throes of religious fervour. 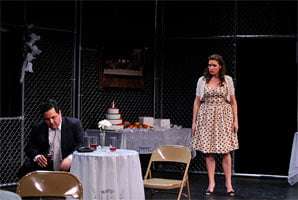 Christian Šebek’s lovely supple tenor was a delight. As Annina’s over-protective brother, Šebek ably demonstrated his singing and acting skills, the latter especially in the nasty fight scene in Act One. When he ‘accidently’ stabs his girlfriend to death in Act Two, this wonderful performer so skilfully manifested all the varied and contradictory personality traits of his character. Michele’s Act Two aria, ‘Although you made this land your home’ – in which he derides the gathered crowd for Salvatore and Carmela’s wedding, singing with astonishing venom and disgust that they have forgotten their Italian roots.

Sarah Heltzel’s singing and acting captured a credible, grandly temperamental jealousy as Michele’s jilted girlfriend. Her powerful entrance in Act Two – she is first seen at the end of Act One when she arrives to find Michele beaten up and handcuffed to a fence – was a highlight. In Desideria’s Act Two aria in which she is angry with Michele for not returning her intense love for him with similar feelings and asking him why he is so concerned with his Annina, Heltzel’s mighty, attractive voice admirably amplified her feelings of the moment. Matthew Lau (Don Marco) used his firm bass and high-grade acting to great effect as a priest who worthy of inhabiting the cassock of the spiritual and temporal shepherd to the needy immigrants. 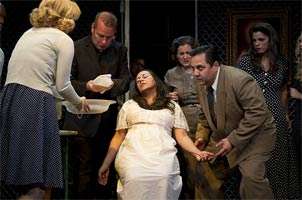 Maria Corona’s Act Three aria ‘You remember the time’, in which she meets Annina and sings to her that only people who get in the paper are those who are pretty or who murder (Michele’s photograph is in the paper for murdering Desideria), was sung with assurance of manner by Linda Garrity.

Pacien Mazzagatti conducted with superb nuance and verve, and kept tempos even-paced. The orchestra performed marvellously. The interludes were beautifully and evocatively executed. As far as scenery goes, effective chain-link fencing was the order of the day, dominating the stage and delineating the interior and exterior locales of the opera: Annina’s tenement apartment on Bleecker Street, the Feast of San Gennaro (a major summer attraction in Little Italy, celebrating Italian food, music, and culture), a lot where the fight scene occurs, Salvatore and Carmela’s wedding celebration, and Maria Corona’s newspaper kiosk near a subway station. Privacy is not the order of the day in this opera, nor was it during the heyday of immigration from Europe to NYC. The only (small) complaint is that the relatively small dimensions of the stage did not permit for a larger, noisier San Gennaro procession. The lighting and costuming were right-on, conveying the material and emotional sides of the Italian immigrants’ vibrant experience.