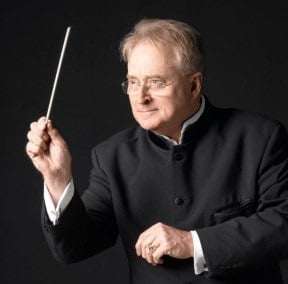 The debut programme of a newly-constituted orchestra in London always brings pre-concert enquiries, not least the question “Does our capital city need another orchestra?”. In purely numerical terms, perhaps not, for London’s many full-time professional orchestras, alongside those attached to its major music colleges as well as the semi-professional and youth orchestras that concertize regularly, must outnumber those of any city on the planet.

Yet London concert programmes are not (or rather should not be) about how many orchestras there are; they should be about orchestras choosing to perform worthwhile music which is rarely given, alongside works from the standard repertoire.

As we are in Great Britain, it behoves such orchestras to play a fair amount of works by British composers, hopefully from the large body of eminently valid orchestral music that has been, for quite a few decades now, almost totally ignored by our more permanently-established state-funded orchestras, forever chasing the same clique of ‘international’ soloists and conductors, many of whom are indeed fine artists, but whose ‘international’ standing prevents them from investigating, let alone performing, quite magnificent British works which lie unperformed on publishers’ shelves from one decade to the next. It is no use expecting a foreign thirty-something soloist or conductor to arrive on these shores with a clutch of British masterpieces in their repertoire bag.

Nor are we talking about ‘neglected composers’ of whom, in the pantheon of British concert music, there are many whose music was once regularly heard at the Proms until quite recent times, but whose works have seemingly been thrown aside in the recent chases after fashion – at heart a profoundly inartistic search – for, example, ‘youth’, female or ethnic composers, or whatever else grabs the headlines in a socially justifiable rather than artistically worthwhile sense, and hopefully puts bums on seats.

What we are talking about is in many ways a consequence of the deliberate destruction of the understanding of art music in our educational system, which has led to a great swathe of fine music by native composers being ignored, and generations of young people growing up in ignorance of what is, after all, their inheritance and their country’s legacy. Whilst during these past four years the centenary of World War One has been the peg on which many concert programmes have been hung, such programmes have almost always been made up of music by British composers. Patriotic music by, say, German composers, equally inspired by their country’s sufferings in the Great War, has been totally neglected. So it was with something of a jolt that one contemplated this inaugural programme of the Elgar Sinfonia of London.

Clearly, the Elgar Sinfonia is going to play Elgar’s music, and before anyone claims that his orchestral music is often played, there are quite a few fine and characteristic works by him that are hardly ever heard. Adrian Brown was a long-term pupil of Sir Adrian Boult: with regard to Elgar’s music he could not have had a more sympathetic mentor. In addition, Brown is still the only British conductor to have reached the finals of the Herbert von Karajan conducting competition. Brown’s technique is admirable; his experience is wide and profound, and we heard ample evidence of those factors during this exceptional programme.

As if to justify my opening remarks, the large church of St John’s Waterloo was packed. We were rewarded by performances of high artistic merit.

Elgar’s sole ballet score, The Sanguine Fan, opened proceedings. Ballet music (at least, when this work was written, early in 1917) is intended to accompany dancing. It is not designed to be listened to studiously in a concert hall, although the musical worth of such scores often make them eminently suitable for concert use. During the Great War, Elgar found himself more and more drawn to dramatically-themed works either for, or accompanying, stage performance or for dramatic recitation in concert. The Sanguine Fan throughout is genuine Elgar (it could hardly be otherwise), and although the score contains many echoes of earlier masterpieces, it is certainly worth hearing by itself.

But The Sanguine Fan is no throwback to late-Victoriana: the dramatic theme of the ballet is neoclassical. Written ten years before Stravinsky’s Apollo, the story is more dramatic than abstract, and Elgar’s orchestra – again, whilst not Straussian – is twice the size of the string orchestra Stravinsky called for; nor, continuing the Stravinsky parallels, is the music of The Sanguine Fan (the title has absolutely nothing to do with the archaic Greek story) as ‘incidental’ to the stage proceedings as it is in, say, Pulcinella.

The Sanguine Fan – as it appeared on this occasion – is a fascinating and surely a most important score in Elgar’s theatre music, and also in its relationships to his earlier concert masterpieces. The one work of Elgar’s to which it bears the closest aspects is Falstaff – both are narrative scores, with subtle thematic transformations, but the music of The Sanguine Fan, of course, permits no longueurs, although, as with all genuine ballet music, it has moments of contemplative relaxation.

Such was the commitment and power of this performance that one became convinced, early on, that Elgar did not approach his task as a routine undertaking. There is some eminently worthwhile – and, perforce, unfamiliar – music here, and one could hardly have expected a more engrossing account than Brown obtained.

From the unknown to the familiar: Elgar’s Cello Concerto, with Daniel Benn as soloist, followed. I have not encountered this cellist before, but I have a mental note to seek him out in future. Benn’s was a totally engrossing performance of considerable musical insight, sensitivity and full technical command.

Elgar composed a number of works during World War One which were inspired by the conflict, including three dramatic recitations with orchestral accompaniment to words by the Belgian-born, anglophile poet Émile Cammaerts. Of those works, the second, Une Voix dans le Désert, is the most theatrical, for, in addition to the male reciter, a soprano soloist (a young girl) sings an extended setting of a poem ‘Quand nos bourgeons se rouvriront’ (When the spring returns), interspersed between the lone man observing the destruction lying before him, and the peaceful future to which her song looks forward.

It is a remarkably effective work, and is certainly the most significant of Elgar’s three orchestra-accompanied recitations. Naturally, perhaps, its interest remains almost wholly rhetorical, but there is also much musical interest as was revealed in this performance. With the fine narrator Joe Shefer in the pulpit, and Nicola Ihnatowicz to the left of the conductor, the work made a striking and atmospherically moving impression, Elgar’s myriad orchestration capturing both the scene before us and the hoped-for future pacification with considerable imagination.

Enigma Variations returned us to the familiar. Although dating from fifteen years before the War began, the use of the ninth variation, ‘Nimrod’, at commemorative events brought the programme to a suitable end, the newly-formed orchestra coping admirably with the masterly orchestration and Brown shaping the individual variations in excellent character.

This was a most successful debut concert by a very good orchestra yet some may question the wisdom of the conductor turning to the audience before each piece to talk for five or six minutes about the music they were going to hear. Not everything Brown said was audible to everyone present, who had additionally been offered a twelve-page programme book containing detailed notes on each work.