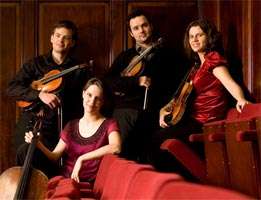 Designed as a showcase for fugue writing, this intriguing programme became more intense as the evening progressed. In a little speech before the Beethoven, Sara Bitlloch averred that in his Grosse Fuge, Beethoven turned the previous image of the fugue on its head, putting emotion first and erudition second. Her point was well taken.

The three Contrapuncti from J. S. Bach’s The Art of Fugue were played straightforwardly well. The Elias Quartet, which takes its name from Mendelssohn’s best-known oratorio, has acquired a reputation for performing that composer’s music. Its tonal profile is strongly flavoured by the Bitlloch sisters’ very individual tones; and I would gently suggest that the excellent players of the inner parts might work on developing more distinctive tones. It seems to me that colouring the separate lines is even more important in Classical and fugal music than in the Romantics.

This particular Haydn string quartet strikes me as a rather austere work. The Elias musicians did their best to counteract this impression with a firm approach to the opening movement and their characteristic portamento. I am all for this effect but it must be executed with precision – Sara Bitlloch was guilty of an ugly upward scoop in the ‘Capriccio’. The rhythm of the Minuet needed to be more quickly established, and in general it could have been better defined. The final fugue was excellent (the Elias members might like to look at the even-more-interesting finale of Opus 50/4).

I see that these splendid young musicians plan a Beethoven cycle. Judging from their brave approach to Opus 130, it cannot fail to be interesting. I was most impressed by the way they all threw themselves into this challenging work. The following criticisms are intended as suggestions as to how they might advance further.Transitions in the opening movement were not exactly seamless – this is something that may well sort itself out through further performances. The Presto seemed a little hurried: greater rhythmic precision would cure this fault. I would also have liked more rhythmic definition in the Andante and the ‘Alla danza tedesca’, where the expression was rather predictable.

I was enthralled by the ‘Cavatina’, though, in which Sara Bitlloch in particular dared to employ portamento of a Busch-like intensity (going back to colouring inner parts, Donald Grant might with advantage get more tonal variation into his echo phrases). For once the beklemmt (heavy of heart) passage had real meaning and the return of the main theme was very poignant.

All four players gave their utmost to the Grosse Fuge, coming through with honour – and with intonation relatively unscathed. The contrasting quieter passages possibly sacrificed a little too much tension but it was a tremendous effort, worthy of these lines from Tennyson’s Ulysses:

One equal temper of heroic hearts,
Made weak by time and fate, but strong in will
To strive, to seek, to find, and not to yield.