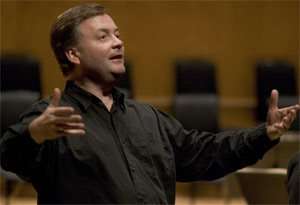 For the final concert in this year’s English Music Festival, the Bournemouth Symphony Orchestra took on a well-balanced programme of rarities and evergreens – conducted by David Hill who, known mainly for his choral work, is clearly at home with the complementary demands of the orchestra (as anyone present at his Royal Festival Hall performance of Delius’s A Mass of Life will no doubt concur).

Certainly there was no doubting the lustrous string tone and ample sonority throughout Five Variants of Dives and Lazarus – Vaughan Williams’s warmly affectionate yet ingenious collation of versions of an English folk-song, whose relative contrasts and similarities enables him to build a cumulative overall sequence in which the underlying theme is not so much developed as enriched and intensified. While not a ground-breaking piece as was the earlier Tallis Fantasia, the present work is no less characteristic in its resourceful handling of multi-divided textures as well as that radiant calm which pervades the music from the outset; qualities, whether technical or expressive, which were astutely handled in this affecting performance.

A change to the running order saw Delius’s Walk to the Paradise Garden slotted between the two works in the first half rather than immediately after the interval. No matter, as this climactic interlude from the opera A Village Romeo and Juliet seldom fails in whatever context – its combination of yearning Tristanesque harmony with the tangible sense of a fulfilment such as can never be attained conveyed here in full measure. Incidentally, in view of The Royal Opera’s regrettable cancelling of its production of the opera – scheduled for November this year – owing to the death of Sir Charles Mackerras and the inability to find a replacement conductor, might not David Hill have been considered given his evident sympathy with this composer? (Or David Lloyd-Jones? – Ed.)

On to York Bowen – a figure who has readily come into his own during the past decade and not least through the continued advocacy of the EMF. Here was the revival of his Rhapsody for Cello and Orchestra – written for Beatrice Harrison and premiered by her at the Hastings Festival in 1927, and so an ostensible ‘middle period’ work in the evolution of a composer whose stylistic consistency was likely his chief failing. Not that the present work is thereby an also-ran; indeed, it emerged among Bowen’s most subtly constructed – its single movement taking in a ‘three-in-one’ structure as well as a slow movement encased within an ongoing sonata design whose salient theme is opened-out in a lengthy and reflective coda. Doubts remain as to its intrinsic capacity to be memorable, while the piece as a whole lacks the emotional power evident in the Fourth Piano Concerto (Bowen’s one large-scale piece which is most worthy of revival), but this was hardly the fault of Raphael Wallfisch who conveyed the unforced eloquence and the pathos of this music in admirable measure.

After the interval, a welcome hearing of Holst’s Egdon Heath: not a work which is absent from the present-day orchestral repertoire, but one which – in a not disimilar manner to Debussy’s Jeux or Sibelius’s Tapiola – represents a distillation of its composer’s mature idiom such as is achieved by relatively few artists. A work, too, whose expressive intensity is implied rather than stated, though there was no lack of fervency in the climax nor of that sombre fatalism which pervades the music thereafter as it recedes gradually though searchingly into the ether. A pity that audience attentiveness was lacking here: as with those comparable masterpieces mentioned above, this is music that makes no concessions to passive listening.

Finally to the world premiere of The Garden of Proserpine: a cantata for soprano, chorus and orchestra on which Vaughan Williams worked during 1897 to 1899 and which – other than the recently unearthed Cambridge Mass – is his earliest extant undertaking on a large scale. Whereas the latter piece was conceived out of academic considerations, the present work arose from purely personal conviction – Algernon Swinburne’s heartfelt if over-earnest poem on the unsustainability of faith or belief in the hereafter understandably striking a chord with an aspiring composer whose agnosticism was present from the beginning. The twelve verses are effectively and often imaginatively divided between chorus and solo soprano, framed by an orchestral introduction and postlude that posit the alternately pensive and anguished tone of the work in no uncertain terms. Jane Irwin coped ably with the wide-ranging tessitura, with the Joyful Company of Singers lacking nothing in commitment.

Although not a momentous rediscovery, The Garden of Prosepine is undoubtedly among the most valuable of those VW pieces which have been rehabilitated in recent years and, thanks not least to the editorial skill of James Francis Brown (a notable composer in his own right and one well deserving of performance at a future EMF) in preparing a score and parts from the manuscript, made for a fitting conclusion to what has been another varied and successful English Music Festival.