Le Corsaire – Ballet in a Prologue and three Acts to a libretto by Jules-Henri Vernoy de Saint-Georges and Joseph Mazilier in a version by Anna-Marie Holmes, based on the poem by Lord Byron 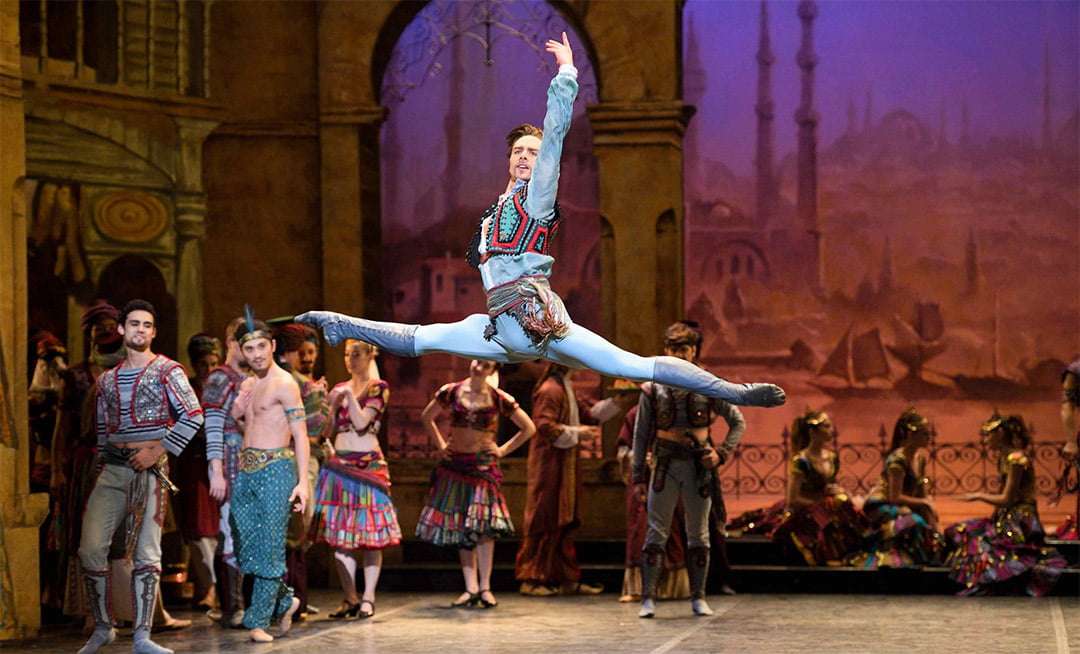 How welcome the return of English National Ballet’s rollicking Romantic romp Le Corsaire; nothing prim or pastel, just full, bold technicolour dancing in the ultimate get-away-from-it-all, feel-good ballet. Don’t go for finely-wrought, filigree dancing but do go for knock-out pyrotechnics and bold gestures in the context of a barking story. Very loosely based on Lord Byron’s ‘The Corsair’, this ballet is a wonderful survivor of a particular dance style and aesthetic which go for all-out scenic effect, from Bob Ringwood’s ravishing period designs and colours, the rumbustious pick-and-mix score and the bravura dancing. In Le Corsaire, everything is writ large: gestures are forward and emotions intense – desire, despair, revenge and triumph – one can only sit back and let it wash over you like an early Hollywood exotic romp.

ENB is riding high at present, now happily ensconced in its wonderful new East End home, and brimming with dancing talent. This performance was not opening night but in no way was this not a first-rate cast; leading the dancing was Principal Shiori Kase as Medora, whose technical accomplishments leave the audience literally breathless – such is the speed and accuracy of her movement, the extraordinary balances, the endless whipped turns, even the most demanding fireworks-fancier would be satisfied. She does, moreover, reveal herself to be a potent communicator, and takes care in presenting a playful, passionate character, unquestionably in love with the pirate Conrad, but alluringly playful with Michael Coleman’s dirty old Pasha. Kase is the real deal – a highly accomplished technician with acting ability.

Brooklyn Mack, a guest principal this season, is an alpha-male Conrad, dominant among his fellow corsairs, determined and imposing. He is very much a bravura dancer who may miss the finesse of some but who carves great arcs in his multiple airborne movements. Conrad’s dancing is real Soviet stuff (it was a non-dancing role in the nineteenth century) and he brings the requisite heft needed for the ‘superhuman’ choreography introduced by Vakhtang Chabukiani and successive powerhouse Russians). A strong and unfussy partner, he took a little time to establish a rapport with Kase, but by the time their pas de deux in the Act Two pirate lair came round, all was well and both exulted in a swoopy, show-off love duet. Kase and Mack were joined by Eric Woolhouse as the slave Ali for the preceding pas de trois, in fact a reworking of the familiar duet made famous by Margot Fonteyn and Rudolf Nureyev. Woolhouse is yet another of director Tamara Rojo’s expanding stable of exciting dancers – he was certainly going to make the very most of his moment in the spotlight in this trio and delivered impossibly high jumps and corkscrew turns; his is a name to watch. 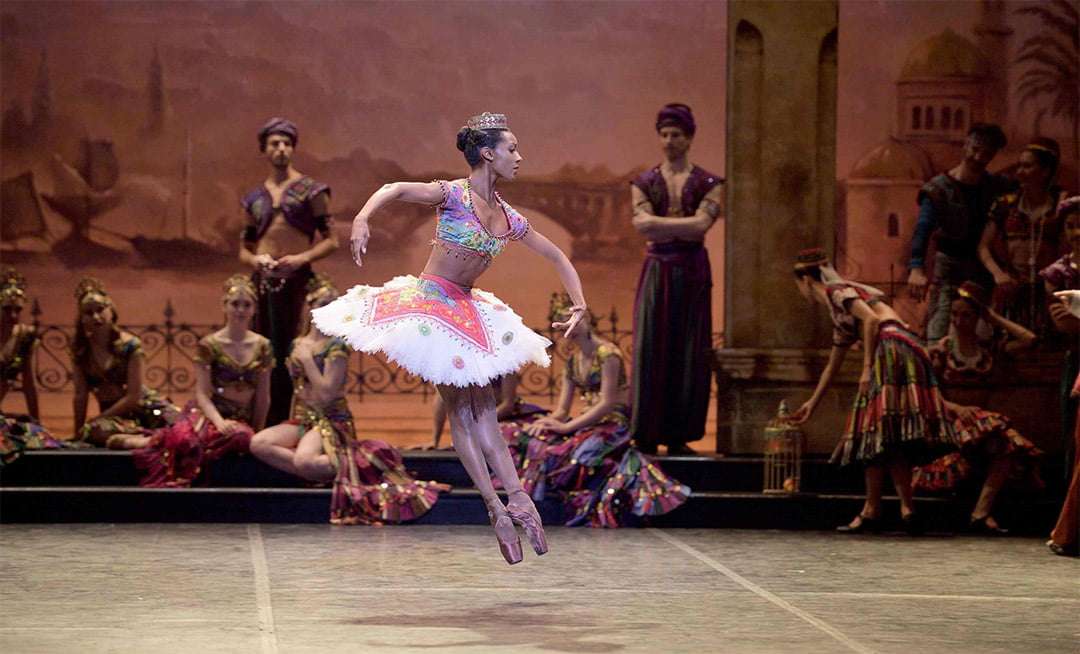 The role of Gulnare, Medora’s friend and fellow trafficked slave, is a curious one – she accepts her fate as one of the Pasha’s harem favourites rather more gladly which makes it all the more of a shame that, having escaped from the palace with her friend, she finds herself drowned in a shipwreck. Katja Khaniukova confirmed her rising form within the company with an assured, almost lyrical interpretation which nevertheless saw all technical challenges easily dispatched alongside a winning stage persona. The fearsome three odalisques section with its series of tricky solos was well tackled, Precious Adams impressing with some fine footwork and both Emma Hawes and Isabelle Brouwers powering through their multiple turns – perhaps here, ideally, a degree more grace would have been welcome. Special mention for Aitor Arrieta as the slave owner Lankendem and Miguel Angel Maidana as the treacherous pirate Birbanto. First Soloist Arrieta, cast against princely type, cut a handsome figure indeed and, in addition to some show-off steps of his own, brought strong acting to what is a tricky role; Maidana is a recently-recruited Paraguayan corps de ballet member who here assumed a major named role with impressive assurance, acting powerfully in his arguments with Conrad and dancing with considerable buoyancy. Young he may be (the addition of a full piratical goatee beard helped mask his youth) but he held the Coliseum’s stage with confidence.

The company entered into the faintly ridiculous spirit of the production, delivering full, ripe performances which contributed greatly to the unquestionable success of the enterprise. Full marks to Gerry Cornelius and the orchestra who played the score with brio and zest, a brisk musical wind which whisked this particular balletic vessel along to its glorious conclusion.