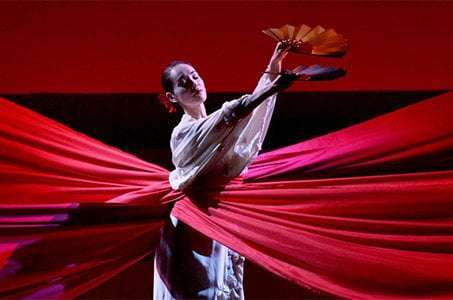 This is the fifth revival of a successful, even iconic Coliseum classic, first staged in 2005. Anthony Minghella’s only opera production is visually ravishing yet dramatically inert, inverting the priorities of Moshe Leiser and Patrice Caurier’s unobtrusive realisation at Covent Garden. Madama Butterfly has been both condemned for its cultural stereotyping and praised for its skewering of Yankee imperialism but no-one seems too troubled by political subtexts at either venue. At ENO ‘the child’ (a puppet dressed in a sailor suit controlled by a team of three puppeteers) does at least wave an American flag as Cio-Cio San kills herself.

Working with his wife Carolyn Choa (billed as original choreographer and associate director), Minghella went for a riot of colour which, famously, has also wowed audiences at the Met. If you’ve yet to catch up with the show, it is well worth doing so. There’s a set of gorgeously shimmering blocks and screens, a mirrored-effect ceiling to reflect the space and the participation of sundry stagehands and puppeteers shrouded in black. That details of Butterfly’s household, and even her child, are brought to life with the aid of technical wizardry and mime doesn’t necessarily help Puccini’s opera, often introducing an element of artificiality just when you need the emotions to feel real. Rather more effective is the stylised framing device for Butterfly herself, silhouetted against a blood-red background. Han Feng’s costumes remain ravishing and so is Peter Mumford’s high-tech lighting, even if the scale and tone feel more appropriate to Turandot than to Butterfly. The production team give us a sophisticated take on the customary concatenation of cherry blossoms and paper lanterns. You just have to accept that this is fantasy theatre in which the setting is vague, the characters secondary, without inner lives. 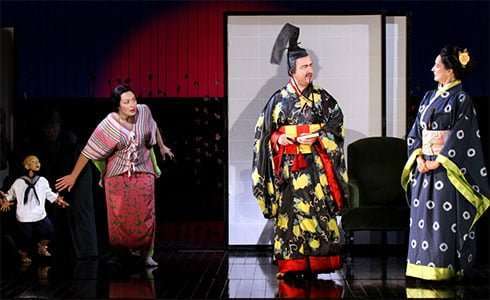 In this context the title role becomes more than usually difficult to crack. The protagonist has to evoke the vulnerability and sweetness of a young girl while conventional believability is constantly being undercut by stage business. On opening night the not-fragile-looking Russian-American soprano Dina Kuznetsova displayed some Slavic oddities of enunciation and not much cream in the voice (she is scheduled to sing Galina Vishnevskaya’s part in Britten’s War Requiem). A compelling stage presence helped compensate for the darker timbre and she is plainly a considerable artist.

With one exception her supporting team was unexceptionable rather than inspired. The mellifluous, noticeably Welsh Pinkerton of Timothy Richards needed more idiomatic focus and bite to ride an over-enthusiastic orchestra, particularly in Act One. He received the now-traditional pantomime boos at the curtain call – which perhaps tells you something about the one-dimensional characterisation encouraged by the production concept. Louder, darker and grittier was the Sharpless of George von Bergen, a consul with a youthful look and, disturbingly, the voice of a much older man. It was Pamela Helen Stephen, a production stalwart making a welcome return as Suzuki, Butterfly’s faithful maid, who offered the most convincing portrayal.

Making his ENO debut, Gianluca Marcianò, who conducted this score at Grange Park last year, elicited vigorous and unanimous playing without much in the way of subtlety of nuance. The first Act seemed uniformly loud with exceptionally boisterous tuned percussion (plus one intrusive mobile phone). The ENO Chorus was on fine form.

It was second time around for Sarah Tipple, a revival director with plentiful experience in musical theatre, her goal to keep everything running smoothly without plumbing new depths. Significant players spent much of the drama occupying their own space, so difficult to decide whether this was a conscious attempt at oriental formality or a by-product of the preoccupation with image, lighting and choreography.

The running time is a little over three hours with an extra interval placed partway through Act Two after the ‘Humming Chorus’. No tearjerker then but still definitely an event.