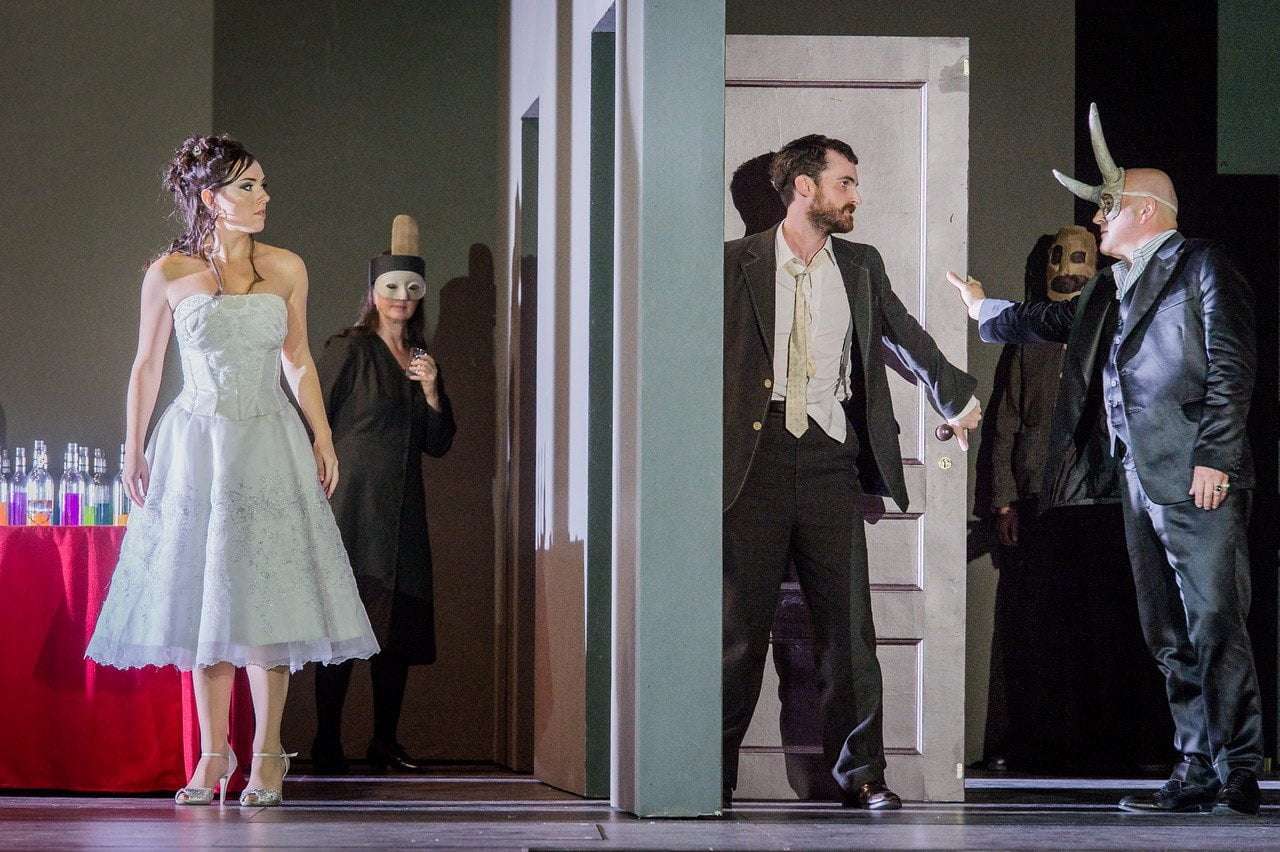 Compared with ENO’s last two productions of Don Giovanni, this new one from Richard Jones is a sober affair, with Paul Steinberg’s austere designs, a monochrome set of sleazy, interconnecting hotel bedrooms and many doors (which would be a perfect setting for a French farce), Nicky Gillibrand’s black suits and gowns (with one telling exception), and all the colour reserved for death and food – the Commendatore’s tomb and the Don’s banquet.

There are, though, enough of Jones’s signatures – a cleverly worked-out network of associations, much formulaic, regimented movement (precision work from Sarah Fahie) – to maintain his directing style. But, if it’s broad comedy and even broader titillation you want from Mozart’s dramma giocoso, forget it. There is just one belly-laugh, when Don Giovanni and Leporello swap identities at the start of Act Two – an event that in Jones’s love of symmetry has big implications for the conclusion, which it would be a spoiler to reveal, and which very simply underlines a truth of human nature with exuberant cynicism.

While most of the characters are conventionally drawn, Jones has spiced things up in his direction of Donna Anna as a paragon of virtue who colludes in robust rough sex with the hooded Don Giovanni in the opening rape scene (while her father, the Commendatore, is pleasuring himself with a prostitute in an adjoining room before being penetrated in turn by Giovanni’s dagger). 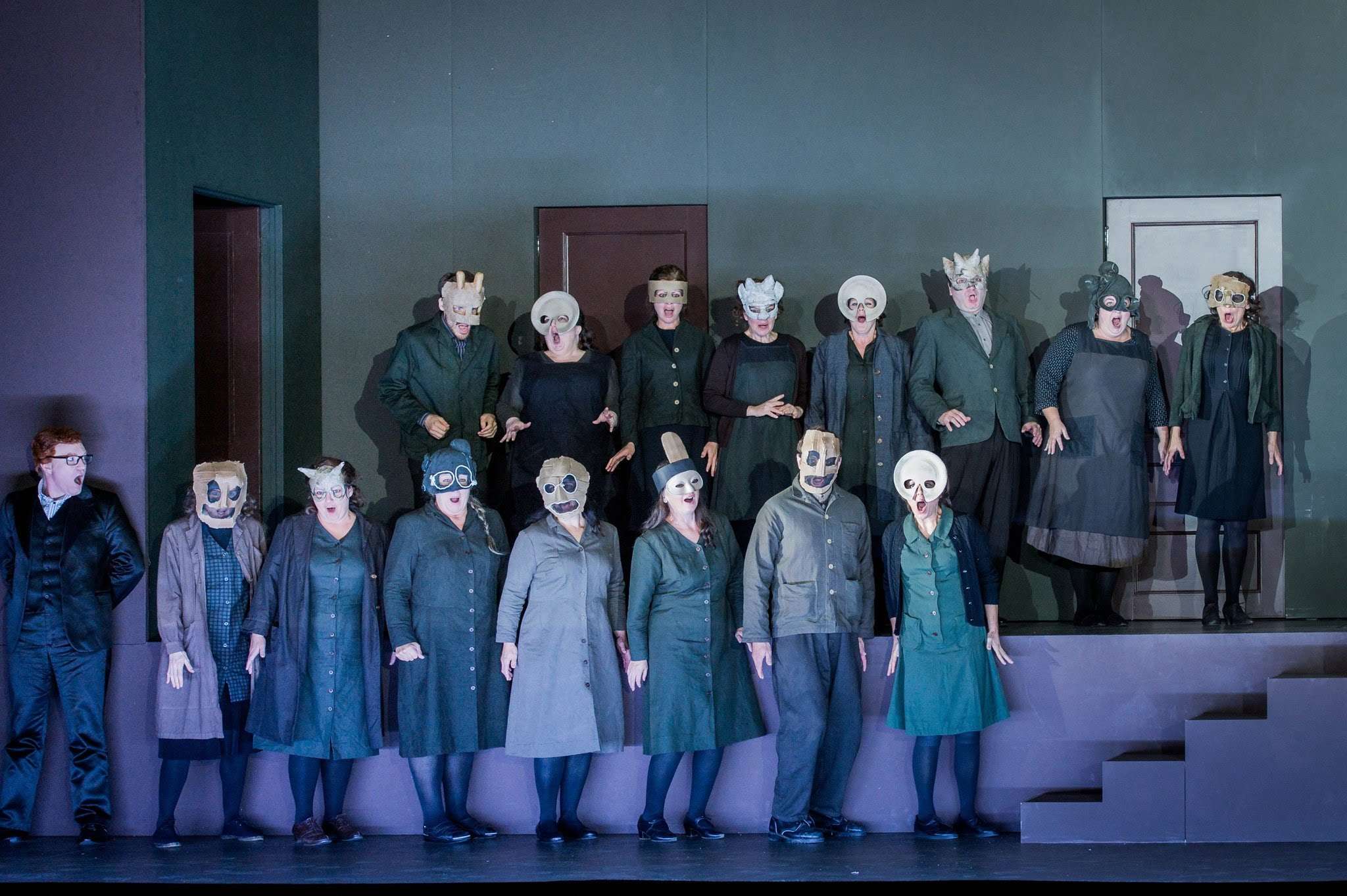 During the Overture, we were treated to a foretaste of the Don’s catalogue of conquests as a parade of women submit to him (along with a younger model of Leporello), leaving no room for doubt about his use of sex as control. He channels the irrepressible entitlement and baffling attractiveness of someone like Aristotle Onassis, and the use of Christopher Purves’s saturnine, inscrutable mugshot on the WANTED posters that are a feature of the staging – with the word “wanted” carrying an obvious double meaning – recalls the photographs of the so-called wickedest man in the world Aleister Crowley, aka “Great Beast 666”, whose credo “Do what thou wilt shall be the whole of the Law” applies with knobs on to Don Giovanni.

The set includes a phone booth, used to powerful effect by Dons Giovanni and Ottavio, and street lamps, so the action moves easily from anonymous interior to equally featureless street scene (the setting is nominally contemporary Spanish, but it could be anywhere), and the women’s fascist-fetish costumes suggest compliance between them and Giovanni. The one exception to this pervasive black is the white gown worn by the newly-married Zerlina, emphasising the special allure virginity has for him.

Jones lays out the various relationships with great care. For all the freedom Clive Bayley’s Leporello enjoys, he observes the boundaries and, as the finish shows, is expendable. Bayley’s fine singing in the ‘Catalogue’ aria and his crisp delivery of the recitative (for which surtitles were not used) made his cheeky deference to his boss all the more vivid. Christopher Purves delivers Don Giovanni’s indestructible alpha-maleness with shark-like blankness. All his entanglements are acted out brilliantly, but he was at his vocal and acting best in his seduction of Zerlina, with a notably insinuating ‘Là ci darem la mano’.

Donna Anna’s relationship to Don Ottavio came layered with the knowledge the audience has of her from the opening, knowledge that Ottavio does not have. Caitlin Lynch’s imperious, compromised Donna Anna inevitably fails to arouse much sympathy, compounded by the edge to her otherwise agile, bright voice. Allan Clayton’s Ottavio, correspondingly, was more than just her sweet-voiced walker, and he sang both arias with consummate beauty and flexibility.

Jones assigns great importance to Zerlina’s entanglement with Giovanni, perhaps to salvage some humanity from this ultimately inhumane opera, and Mary Bevan responded with tender singing, especially in partnership with Nicholas Crawley’s excellent Masetto. Christine Rice’s Donna Elvira hit the stage nervy and got steadily loopier, tipping over the edge in her magnificently sung ‘Mi tradi’, but it must have been hard work sustaining that level of convulsive twitching. James Creswell sounded underpowered as the Commendatore in Act One, but was on full, sonorous form later.

Jones adds one of those unscripted mute roles, in this case a maid for Elvira acted by Danielle Meehan, whose sole – and otiose – purpose is to provide yet more evidence of Don Giovanni’s licentiousness.

Despite the odd moment of slippage between pit and stage in some of the ensembles, Mark Wigglesworth and the ENO Orchestra ensured a close rapport with the singers, and the playing accentuated the music’s inherent romanticism, unpicking Jones’s characteristically barbed view of the opera.