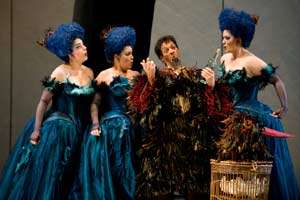 This was veterans’ night, on the stage if not in the audience – and did those ‘oldies’ show the young pretenders a thing or two! The production itself is vintage – now in its thirteenth revival, it’s the fifth time I have seen it, third time reviewing it, but it has not lost its power to surprise and delight.

What was really heart-warming about this first night was the number of non-cognoscenti in the audience. They must have been mostly responsible for the hearty laughs that punctuated the evening (laughter, at a Singspiel? Surely, you jest?), despite the occasional awkwardness. Never work with children or animals – I’m sure every critic will trot out that one, so I may as well get in first; in the charming scene where Papageno calls his doves to return to their wicker cage, they failed to co-operate and Roderick Williams had to improvise – much to the audience’s delight, the bird-handler who expertly intervened was clad in dove-grey 18th-century servant’s garb, and got a round of applause for his saving of the situation. Williams was the star of the show; he is a seasoned Papageno, with a ready smile, an ingratiating manner, wonderful comic timing and a genuinely warm, evenly produced baritone – how often do you get the feeling that someone might just make Papageno an offer in response to his pleas?

Williams did not hog the limelight – amongst the other veterans was Robert Lloyd’s patrician, kindly, moving Sarastro, sonorous in tone and entirely credible of mien. Stuart Kale’s pantomime villain Monostatos is well known, and he seems to have added an extra layer of lasciviousness to his portrayal. Graeme Danby gave a noble account of the crucial role of the Speaker. At the other end of the age spectrum, the three boys (Charlie Manton, Louis Watkins and Harry Manton) were the youngest I’ve seen, and amongst the best – spirited enough in the energetic sense to be credible as children, yet spiritual enough to be supernatural.

Elsewhere, things were not quite so ideal. I have followed Robert Murray’s career with much interest since his superb Flute/Thisbe and Albert Herring at the Royal College of Music, and his Wigmore Hall debut recital justified the confidence I had felt about him. On this occasion, my impression was that Tamino in such a large house may have come a little too soon for this fine young tenor. It may have been first-night nerves, or possibly too little rehearsal time, but he seemed not to inhabit the role as he usually does, his naturally ardent manner subsumed into something much more tentative. ‘Dies Bildnis’ was sung with clear diction and mostly immaculate phrasing, but after he had cleared that hurdle he seemed to take a taciturn view of his character.

Something similar was apparent in the Pamina of Sarah-Jane Davies, another RCM graduate who impressed me very early on. Perish the thought that any soprano might become bored with this role, but I felt that she was, at times, going through the motions rather than engaging as fully as is her wont. I’ve praised her fulsomely, and justifiably I’m sure, in the past, so perhaps this was also a case of first-night jitters or too little time to become comfortable with the demands of the production – her previous assumption of the role here, with Andrew Kennedy’s Tamino in 2005, was more successful. Nevertheless, her warmly sympathetic voice and nuanced phrasing gave much pleasure.

Emily Hindrichs was making her house debut as The Queen of Night, another case of too fast, too soon – here is a bright-toned, agile soprano well suited to the music, but as yet those arpeggios are a little too much for her, and the first aria was under-powered. However, she was a satisfyingly malevolent Queen, and with time that coloratura will be impressive. Her ladies were strongly sung and characterised by Kate Valentine, Susanna Tudor-Thomas and Deborah Davison. Amanda Forbes was a slightly nervous Papagena, as well she might have been given the vagaries of those seat-belts in the nest, but she managed not to be entirely upstaged by her Papageno, no mean feat in this case.

Erik Nielsen, Kapellmeister of Frankfurt Opera, was making his ENO debut. He shaped the music skilfully although there were times when the Orchestra was a little wayward. The chorus of acolytes and Quakers sang eloquently as usual, the singers managing to look authentically enlightened without being too superior in their perfection.

Nicholas Hytner’s production of “The Magic Flute” certainly deserves continued revival – it still presents an absolutely credible view of the piece, with the philosophical and the pantomimic so finely balanced, and it still looks so right for the work, with the elegant pillars concealing hieroglyphs, the mossy trees from which those cuddly bears amble, the contrast between the public and private personae of Sarastro and his brethren shown by the wonderful costumes, and that lovely moment when Papagena descends in her nest. If the production can continue to please a critic who has seen it several times whilst delighting audience members who have never seen the opera before, then ENO is clearly doing it right.