Skip to content
LnRiLWNvbnRhaW5lcltkYXRhLXRvb2xzZXQtYmxvY2tzLWNvbnRhaW5lcj0iNmIzNDMzNmNmZTc3NWZiNGJlMTVjMmIwMzU3NWM1MjYiXSB7IHBhZGRpbmc6IDI1cHg7Ym94LXNoYWRvdzogNXB4IDVweCAxMHB4IDAgcmdiYSggMCwgMCwgMCwgMC41ICk7Ym9yZGVyOiAycHggZG90dGVkIHJnYmEoIDEwOSwgMTA4LCAxMDgsIDEgKTsgfSAudGItZmllbGRbZGF0YS10b29sc2V0LWJsb2Nrcy1maWVsZD0iODM3Y2ExZjc0MGRjZDdkOTdlMzQzOWMyYjIwMWZmZTMiXSB7IGJhY2tncm91bmQtY29sb3I6IHJnYmEoIDIzOCwgMjM4LCAyMzgsIDEgKTtwYWRkaW5nLXRvcDogMTBweDtwYWRkaW5nLWJvdHRvbTogMTBweDtwYWRkaW5nLWxlZnQ6IDEwcHg7IH0g
LnRiLWNvbnRhaW5lcltkYXRhLXRvb2xzZXQtYmxvY2tzLWNvbnRhaW5lcj0iNmIzNDMzNmNmZTc3NWZiNGJlMTVjMmIwMzU3NWM1MjYiXSB7IHBhZGRpbmc6IDI1cHg7Ym94LXNoYWRvdzogNXB4IDVweCAxMHB4IDAgcmdiYSggMCwgMCwgMCwgMC41ICk7Ym9yZGVyOiAycHggZG90dGVkIHJnYmEoIDEwOSwgMTA4LCAxMDgsIDEgKTsgfSAudGItZmllbGRbZGF0YS10b29sc2V0LWJsb2Nrcy1maWVsZD0iODM3Y2ExZjc0MGRjZDdkOTdlMzQzOWMyYjIwMWZmZTMiXSB7IGJhY2tncm91bmQtY29sb3I6IHJnYmEoIDIzOCwgMjM4LCAyMzgsIDEgKTtwYWRkaW5nLXRvcDogMTBweDtwYWRkaW5nLWJvdHRvbTogMTBweDtwYWRkaW5nLWxlZnQ6IDEwcHg7IH0g
Offenbach
Les Contes d’Hoffmann – Opéra fantastique in three Acts with Prologue and Epilogue to a libretto by Jules Barbier & Michael Carré after E. T. A. Hoffmann [sung in the English translation by Tim Hopkins]
LnRiLWNvbnRhaW5lcltkYXRhLXRvb2xzZXQtYmxvY2tzLWNvbnRhaW5lcj0iNmIzNDMzNmNmZTc3NWZiNGJlMTVjMmIwMzU3NWM1MjYiXSB7IHBhZGRpbmc6IDI1cHg7Ym94LXNoYWRvdzogNXB4IDVweCAxMHB4IDAgcmdiYSggMCwgMCwgMCwgMC41ICk7Ym9yZGVyOiAycHggZG90dGVkIHJnYmEoIDEwOSwgMTA4LCAxMDgsIDEgKTsgfSAudGItZmllbGRbZGF0YS10b29sc2V0LWJsb2Nrcy1maWVsZD0iODM3Y2ExZjc0MGRjZDdkOTdlMzQzOWMyYjIwMWZmZTMiXSB7IGJhY2tncm91bmQtY29sb3I6IHJnYmEoIDIzOCwgMjM4LCAyMzgsIDEgKTtwYWRkaW5nLXRvcDogMTBweDtwYWRkaW5nLWJvdHRvbTogMTBweDtwYWRkaW5nLWxlZnQ6IDEwcHg7IH0g 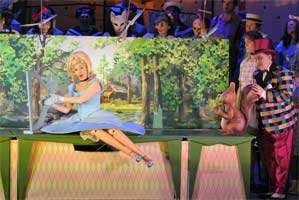 The demon drink affects everyone in different ways. While the woman who bawled obscenities into her phone throughout my train journey home from The Tales of Hoffmann (a new co-production between English National Opera and Bayerische Staatsoper) probably won’t remember much of her evening, the sot of an anti-hero presented by Richard Jones in his hallucinatory staging of Offenbach’s final opera proves unforgettable. “In vino veritas” proclaims the Muse-in-the-booze as she leaps from Hoffmann’s well-stocked liquor cabinet and transforms herself into the schoolboy Nicklausse – a shard from the alcohol-addled writer’s distantly-remembered past. 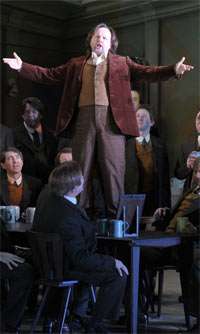 Jones shuns librettist Jules Barbier’s literal stage directions and locates the piece within an interior world. The opera’s three tall tales are played out in variants of Hoffmann’s own study, re-imagined each time to suggest his creative mind at work within its own environment. Up until the opera’s close (when Stella, his true love, finds him sprawled under his desk in a stupor) nothing we see is real – not even the swarm of students who crawl out of the woodwork during the Prologue, nor indeed the evil Lindorf, here a figure conjured by the Muse herself as a somewhat neutered emblem of darkness.

For the most part Jones and his designer, Giles Cadle, carry off this reinvention brilliantly, and with the storylines rendered intact there is little here to irritate even the most literally-minded of spectators. Only in the final yarn, where the Venetian courtesan Giulietta steals men’s souls for her evil master, Dapertutto, does the interiorised setting fail to convince. A giant shaving-mirror makes a poor trade-off for Venetian voluptuousness, and since the glorious ‘Barcarolle’ that opens the Act is clearly a dramatic inconvenience, the grubby-kneed Nicklausse (Christine Rice, in luxuriant voice throughout) is obliged to deliver it from a static position, stage right, out of harm’s way. What Jones would have done if his working score had included the romantic fourth-Act septet (now known to be spurious), goodness knows. All the same, it’s a sad loss. 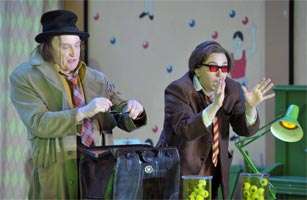 Inspired casting has been a hallmark at ENO this season. The Tales of Hoffmann is no exception. To play the quartet of soprano roles alongside a team of leading London regulars the company has brought in a staggering new talent, the American Georgia Jarman. Here is a singer who is able to flit from lyric- to bel canto-singing at the flick of a switch, as anyone who essays all four of these roles must do, and to do so with consistent depth and utter beauty of tone. The fact that Jarman’s range and palette call to mind a young Maria Callas is emphasised by the evocative costumes she wears both as a Violetta-ish Antonia and a Tosca-esque Giulietta.

Any fears that Barry Banks might possess too light a timbre for the title role are banished by his authoritative interpretation. Having built his reputation on Mozart and Donizetti, the tenor’s voice seems ready now for heavier roles, and he sustains with ease a near-heroic quality throughout a long evening. Clive Bayley, in fine vocal fettle, is as characterful as ever as the four villains, even though the production only really gives him a decent platform when he plays the dastardly Dr Miracle in Act Two. Here, kitted out like something by Charles Addams, he and his band of clones merrily torment poor Antonia to her doom.

Simon Butteriss steals the limelight with a couple of neatly-sung camp turns – one as a female fag-ash Cochenille, the other as a self-satisfied servant, Frantz – while Graeme Danby and Iain Paton contribute fine cameos as Antonia’s father and the doll-maker respectively. As for the doll itself, it is a show-stopper. Not only does Jarman croon Olympia’s coloratura yelps with careless ease, but the theatrical sleight-of-hand that breathes life into the puppet (think Lady Penelope, or perhaps Blue-Fairy Barbie) is hugely entertaining and hilariously choreographed by Lucy Burge.

Antony Walker marshals his ENO troops with nicely judged tempos and a concern for dramatic momentum. While the orchestra is admirably responsive to his baton, the diction of the ENO Chorus is sometimes less distinct than usual. Then there is the one major blot: the shocking amplification of the final offstage chorus towards the end of the Epilogue. Perhaps it was connected with the technical hitch that delayed the start of Act Three; if so, we should let it pass. If not, though, it is a bad misjudgement, for as I gazed around the auditorium looking for the source of the sound I saw several-hundred other people do exactly the same. Not even Richard Jones, I suspect, would court that degree of audience disassociation.