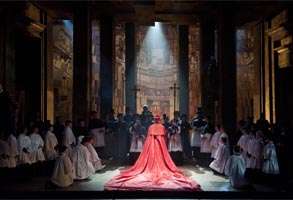 This triumphant Tosca, first seen in 2010, was a rare vindication for English National Opera’s recent dogma of hiring directorial ingénus to helm major productions. As in Puccini’s Grand guignol melodrama itself, the policy had already left a litter of corpses in its wake, so the knives were out for Tosca Emerita Catherine Malfitano’s first stab at directing in the UK.

Now, eighteen months on and with the production a known quantity, things have changed: the stars of goodwill were brightly shining ahead of the first revival, not least for Claire Rutter in the title role. 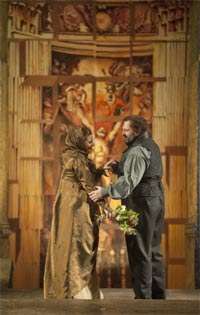 Rutter is a considerable home-grown talent to whom the house owed a decent production after last year’s Lucrezia Borgia debacle, though at the moment Donizetti or Bellini may be a better fit than Puccini for this fine singer. Blest with a powerful stage presence and a top-end coloratura like warm steel, Rutter was Floria Tosca to the life except when – as happened several times – Puccini swamped her lower range with his orchestral billows. Nevertheless, the set-pieces all hit the spot and she caught Tosca’s emotional traversal from low pride to high tragedy most movingly. ‘Vissi d’arte’ (or “Love and music”, as it emerges in Edmund Tracey’s terse, urgent translation) was profoundly affecting, and the development of her character’s moral confrontation with Scarpia was gripping. Between them, Rutter and Malfitano ensured that there was far more to Act Two than just an aria and a knife. 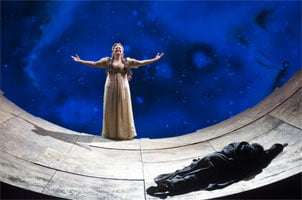 Malfitano’s focus on the opera’s malevolent antagonist is surprising, given her personal identification with the heroine’s role, but she always places Scarpia in dominant stage positions – even at the expense of Tosca herself. But her semi-traditional staging is full of eye-opening moments, most of them felicitous, such as the fervour with which Cavaradossi delivers his final kiss to Tosca and thereby shows us he knows – as Tosca does not – that his execution will be for real. Some of her ideas are dubious (the choirboys’ dance is out of place amid the spontaneous realism of Act One) but mostly her work has insight, confidence and style. She is well supported by Frank Philipp Schlössmann’s designs: his realistic, perpendicular sets for the first two acts give way to a stunning curved structure for the final scene whose dual perspectives impressionistically evoke a deep, open-roofed dungeon and an impossibly star-lit sky.

Of the minor characters, only Henry Waddington’s irascible Sacristan made much of an impression. The talented Matthew Hargreaves is miscast as Angelotti; the dissident republican whose predicament launches the opera demands a voice of greater spikiness and definition than his idiosyncratic baritone can muster.

Stephen Lord overcame some disgraceful audience participation (the Saturday-night coughers let rip with abandon during Act Three) to shape a reading of the score that those with ears to hear will not forget in a hurry. Lord’s secrets are his instinct for pacing and his grasp of the music’s architecture, and he was wonderfully supported in realising his interpretation by the musicians of ENO Orchestra, who played out of their skins for him. Act One, a fragmentary forty-minute expanse dominated by essential expository material, is rarely driven with such coherence and impetus, and the final ‘Te Deum’ was overwhelming.

The revelation of this revival is Gwyn Hughes Jones as Cavaradossi. The Welsh tenor, kindly remembered from ENO’s otherwise forgettable Turandot two years ago, gave a passionately engaged ‘Recondita armonia’ in Act One, an astonishing and heart-wrenching ‘E lucevan le stelle’ in Act Three, and was wonderful in pretty well everything in between. “Vittoria!”, the painter’s defiant riposte to Scarpia, is translated as “Victorious!” – a word whose ringing affirmation both in sense and sentiment belonged to Hughes Jones on this night; a star may not have been born, exactly, but one certainly came of age.