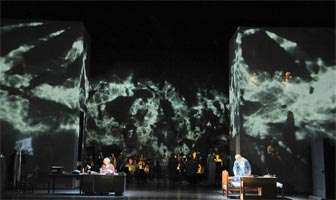 American operas on contemporary or at least relevant themes have become almost commonplace since John Adams blazed the trail (or, rather, renewed one seemingly left in abeyance from the immediate post-war era) with Nixon in China almost a quarter-century ago. No reason, then, why Nico Muhly – 30 this year and, to all appearances, a ‘child of his time’ – should consider doing otherwise: and, with its scenario of internet-induced alienation, Two Boys is undoubtedly a stage-work very much of and for the present – which largely accounts for its musical content as much as for its overall conception, as well as those intrinsic failings such as no amount of scenic dexterity, vocal expertise or slickness of production can compensate.

Taking its cue from a true story that took place in Manchester almost a decade ago, Craig Lucas’s libretto might be described as dependable but dull – taking the audience through the twists and turns of a mildly intriguing plot with few if any words wasted (learning from Da Ponte and Boito, not to mention Alice Goodman) yet with little in the way of arresting or provocative verbal imagery (the thought occurred that if Myfanwy Piper were still writing librettos, they might be something similar) and even less, moreover, of a sense that the thoughts and actions of the main protagonists ‘matter’ in any real sense. The text does not get in the way of the drama but contributes relatively little of interest to it. 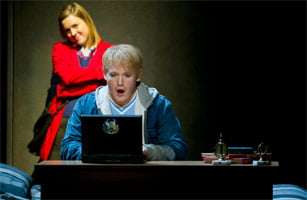 The production is fair if hardly an outstanding success. Bartlett Sher favours essentially neutral backdrops against which lots of video imagery – computer graphics, CCTV footage and chat-room exchanges in all of their colloquial glory being much to the fore. All of which is fine within the context of the opera as it unfolds, but neither this nor Michael Yeargan’s sombrely amorphous sets – something along the lines of Blade Runner meets The Wire – generate much in the way of a striking visual focus. Catherine Zuber’s costumes are tellingly functional while Donald Holder’s lighting lacks nothing in resourcefulness, yet the overall visual component adds up to nothing which feels distinctive let alone exceptional. 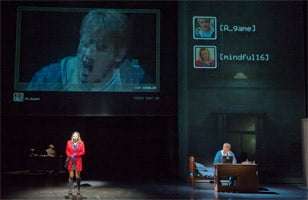 Regrettably, this is equally true of Muhly’s music. Evidently a composer of some versatility, as is evident from the wide number of bases covered by those works so far recorded (notably on the Decca label), the present score lacks a defining presence as might have overcome shortcomings elsewhere. Vocal lines are supple and elegantly written, while the orchestral writing has (for the most part) a luminous clarity that never obscures what is being sung, yet the feeling persists of harmonies that would not seem out of place in middle-period Aaron Copland allied to rhythms in which the composer’s reliance on procedures derived from his minimalist forebears (notably Philip Glass) is all too apparent. There are instances in which the expressive impact is redolent of his often-striking pieces for orchestral or ensemble, while the choral passages are a reminder that his relationship to the English choral tradition is a productive one, yet neither its generalised word-setting nor the uniformity of its pacing suggests Muhly to be a born opera composer destined to uncover new theatrical possibilities in the coming years.

The cast is unexceptionally fine. Susan Bickley overcame some initial roughness to deliver a convincing portrayal of Anne Strawson, the hard-working detective who has to cope with the parallel universe that is the present-day internet and whose mother is rapidly succumbing to dementia but with whom empathy is at length established. Not so in the case of Brian, the archetypal adolescent whose existence is far removed from that imagined by his uncomprehending parents, yet whose persona remains obstinately undeveloped for all that Nicky Spence had striven to inject some much needed eloquence into his role. Joseph Beesley latterly comes to the fore as the real Jake – the choirboy and computer genius whose multiple character inventions lead to his attempted murder, conveyed here with ominous neutrality. None of the other roles offers much room for development – yet Valerie Reid gave an affecting cameo as Anne’s mother, while the honeyed tones of Mary Bevan’s Rebecca and Heather Shipp’s strident Fiona were wholly in-character. Jonathan McGovern was an earnest Jake manqué and Robert Gleadow was fittingly sinister as Peter, while Michael Burke was a consoling Doctor and Philip Daggett was stylishly sarcastic as Liam. The members of the Chorus and Orchestra of ENO acquitted themselves with conviction, while Rumon Gamba conducted with real attention to detail and dramatic acuity: busy elsewhere in Europe, he should be enticed back to the UK more often.

At around 110 minutes (divided into two acts of some 65 and 45 minutes respectively), this is not a lengthy opera by any standards though a degree of audience inattentiveness might well have suggested otherwise. Neither a real success nor a failure, Two Boys left a curiously muted impression in almost all respects – not so much failing to deliver as fulfilling its objectives without for a moment going beyond them. Whether the audience felt involved or alienated by what it saw and heard is beside the point: the basis was there for an enthralling music-drama, and Muhly seems undeniably equipped as a composer to have made it happen. As it stands Two Boys held one’s attention, yet it could have provided so much more.

Nicky Spence talks about the role of Brian:

How odd is your online life?: