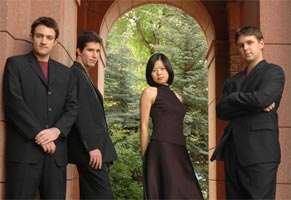 The Escher String Quartet has an impressive resumé for such a young ensemble. Formed in 2005 and now in its third season as part of the Chamber Music Society of Lincoln Center’s residency program for emerging artists.

And, indeed, the Escher musicians are impressive on many counts. Their tone is attractively clear, well-blended and thoughtfully balanced (though Adam Barnett-Hart could sometimes play out more); they play with striking unanimity (as demonstrated in the first of Webern’s Five Movements); and their repertoire choices (how often does one get to hear Zemlinsky’s fascinating Second Quartet?) and programming reveal musical discernment.

But although there was much to admire, there were also many disappointments, beginning with Schubert’s Quartettsatz. The Escher Quartet brought sizzling energy to the opening, but the lyrical second theme was phrased too plainly and lacked sufficient warmth or tenderness, the musicians skirting nimbly over the surface of the music rather than digging in.

Similarly, in the Zemlinsky, the musicians were more convincing in vigorous passages than in reflective ones. They did an admirable job of clarifying the score’s often-dense textures, but the overall conception was strangely monochromatic. This is a vibrantly colorful work (analogous, say, to the paintings of Ernst Ludwig Kirchner or Emil Nolde) that the Escher Quartet rendered in pen-and-ink. Webern’s Five Movements, on the other hand, definitely do have a black-and-white quality, though the images evoked are wild, and full of deep, ominous shadows. The performance could have been more intensely expressive, though it was effective in a coolly modern way.

The Escher Quartet was at its best in the opening movement of Schubert’s final string quartet. Here there was both fire and flexibility, resulting in a reading that had an imposing (and inviting) Brucknerian majesty. After that, however, the interpretation failed to satisfy. The agitated sections in the slow movement were rhythmically stodgy, the scherzo’s trio was rushed, and the finale was unrelentingly aggressive.

Despite these criticisms, I’m eager to hear more of the Escher String Quartet. Yes, the musicians’ playing needs to develop a greater emotional range, but there are enough glimmers of greatness in it already to warrant serious attention.