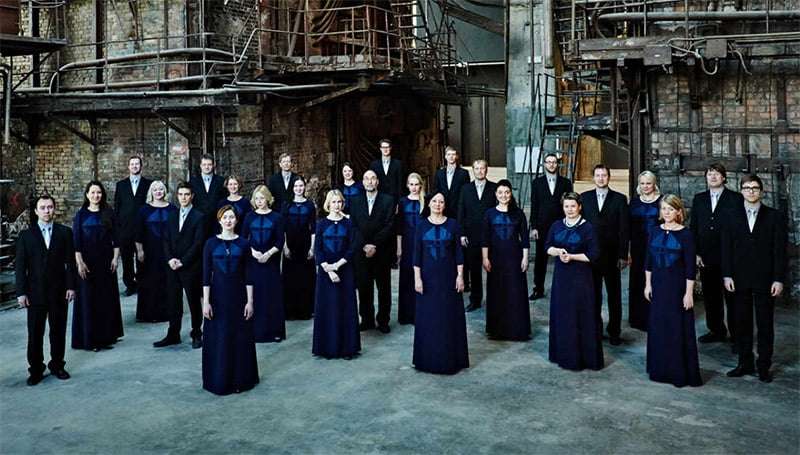 Hot on the heels of Finland’s independence centenary (December 6), comes the centenary of Estonia proclaiming its independence, and this concert – in the presence of Estonia’s Prime Minister Jüri Ratas, and its Ambassador to Great Britain, Tina Intelmann – opened a British celebration of that centenary, with a particular concentration on the fabulous tradition of choral singing (the first Song Festival was held in 1869). It couldn’t have been given a more auspicious start, in the assured voices of the Estonian Philharmonic Chamber Choir under its Latvian artistic director Kaspars Putninš.

The recital split into two halves. The first was Arvo Pärt, Estonia’s most famous musical son, with works stretching from Solfeggio from 1963 to 2001’s Nunc Dimitis. What’s fascinating about the first piece is its simple treatment of a C-major scale, slowly overlapping across octaves. It foreshadows Pärt’s trademark tintinnabulation style, despite being from his iconoclastic discordant early period. Solfeggio is the purest expression fashioned from the names and pitches of the very building blocks of music.

All the other Pärt offerings – following seamlessly with no applause (though some polite and controlled coughing) – were from after his tinntinabular watershed, all using religious texts. Summa – setting the Latin Credo (but with a title to disguise the fact from the authorities) – was followed by the first of three settings from Luke: the Magnificat and Nunc Dimittis, both also in Latin, flanking Luke’s telling the parable of the Pharisee and the publican in German (Zwei Beter) and Matthew’s The Woman and the Alabaster Box, composed in 1997 for Karlstad Diocese (but in English). Pärt’s choral style is like the singing equivalent of ‘slow radio’ or ‘slow cooking’ – suffusing the air with a rich depth of sonority that sends the listener into a calmer, more contemplative place. Only in the closing piece was there a speeding of pace, perhaps inspired by Pärt’s setting of Italian. Dopo la vittoria, for Milan also1997, swaps a Biblical text for a report of St Ambrose’s formation of the Te Deum and baptism of Augustine. It brought to a close a span of superlative choral singing, even though I was a little surprised that the Milton Court acoustic didn’t open out as much as I would have expected it would, given the vocal depth of the twenty-six-strong choir.

The second half brought two further Estonian composers, together with two settings by Jonathan Harvey, contrasting folk-styles with Harvey’s crunchier harmonies. One of Harvey’s final works (premiered posthumously in 2013), Plainsongs for Peace and Light, continued the Psalm settings we had just heard from Cyrillus Kreek. Kreek’s Taaveti laulud (Psalms of David) encompassed his lilting style first with ‘Blessed is the Man’ and then with the more-reflective but no less lyrical ‘Psalm 104’ – for the first time in this concert offering Estonian texts. Harvey’s Plainsongs starts with untroubled plainchant, then, with the introduction of the men’s voices, he brings us into late-twentieth-century harmonies and fades back to plainchant.

Harvey’s The Angels – setting verse by John V. Taylor – was commissioned for King’s College Chapel’s Lessons and Carols, Christmas Eve 1994. From an oscillating accompaniment that reminded me of (another centenary) Holst’s The Planets, Harvey builds the harmonic clashes much quicker, although eventually levelling out into a calm, warm-hearted cadence.

The concert ended with Pärt’s contemporary, five-years older, Veljo Tormis, who died last year. With an extensive catalogue of folk-inspired songs, we heard one of his 1967 St John’s Day Songs (midsummer) – this one, ‘Jaanilaud’, (St John’s Song) from Hargla parish. By comparison to the final work – one of Tormis’s most-famous – this is rather sedately paced; as Raua needmine (Curse of Iron) is a helter-skelter ride of an angry cry about the technological advances since the smelting of iron, leading up to modern inventions. Powered by a constant beat on a shamanic drum, and based on age-old rituals of rhythmically repeated texts which are thrown back and forth between the two soloists, tenor Toomas Tahert and bass Kaarel Kukk, and the choir, there’s a touch of Orff’s Carmina Burana here, but with more extended forcefulness – music that really packs a punch.

As an encore we had another of Tormis’s St John’s Songs – ‘St John’s Steed’ – five months out of kilter with midsummer (but at least on the eve of a super blue and blood moon). This was an evening of unrivalled choral singing; all the more poignant not just because of the Estonian centenary but also, with regard to the Tormis, because the composer’s son, Tonu, remains in the Choir, one of its longest-serving members.