And on the third day of the Southbank Centre’s celebration of Pierre Boulez’s music, to wrap things up after five concerts and “An International Study Day” Boulez himself conducted Pli selon Pli, a “Portrait of Mallarmé”. It’s good that this weekend festival seemed determined by Boulez’s standing and influence rather than a significant birthday (he is perched midway between his 86th and 87th years) or a particular anniversary. 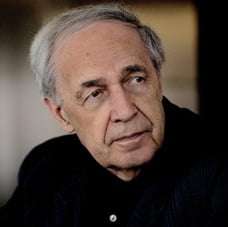 Dapper and vigorous, belying his years, Boulez oversaw a wonderful presentation, as part of Shell Classic International, of his Mallarmé-inspired masterpiece; its five movements first gathered together in 1960 and put into its current (definitive?) identity in 1989 when ‘Improvisation sur Mallarmé III’ was revised. Boulez’s first two recordings of Pli selon Pli (respectively from 1969, CBS, and 1981, Erato) document the work as-then; his Deutsche Grammophon version from 2001 represents it as heard on this occasion. This London account seemed a faultless rendition, the players totally inside the musical language and with skills in spades to realise it; and their dedication to Boulez, his baton-less direction typically lucid however complex the writing, as composer, conductor and, may one say it – father-figure –, was inspired and inspiring.

In layout the large ensemble (somehow ‘orchestra’ doesn’t seem quite apt) had all the strings to the left, all the woodwinds and brass to the right with mandolin and guitar as ‘first desks’, five harps with piano and celesta in the centre, and lots of percussion (mostly mallets and metal) to the rear. With an electrifying gesture from Boulez, the opening chord was not only precise in unanimity and balance but had enough voltage in it to sustain the 65 or so minutes (five knocked off the DG recording) that ensued before that crunching, cracking chord becomes one of the most inevitable, and ominous, ‘returns’ in all music.

From that arresting, seat-pinning opening, the music’s pregnancy and sensuousness built to irresistible iridescence – fragments, interjections, stillness and activity intertwining, not a note missed, misplaced or seeming superfluous. The close of ‘Don (du poème)’ – Gift (of a Poem) – had set the stage and also stopped in mid-air, to be picked up again in ‘Tombeau’ (Tomb), for the consequent three ‘Improvisations sur Mallarmé’, each of which sets a complete Mallarmé poem. Be it a swan trapped in ice, the colour white, birth and death – and more – Boulez matches the prose in music of rapture, drama, variety and variegation, the ‘death’ of ‘Improvisation III’ carrying into the ‘Tomb’ that is the finale. Whether cool and ravishing, beguiling, or brittle, agitated and desolate, these three ‘Improvisations’ (ranging from five to twenty minutes in length) demand a soprano of very particular skills and empathy. Barbara Hannigan was vocally fearless, every intimacy and exclamation perfectly judged, her voice as gorgeous or as declaiming as required, technique and timbre undaunted. She had much less to do in the outer movements, just one line in ‘Tombeau’, but stood throughout the performance, a visual complement to her total involvement.

Her exhalation of the final word – “mort” (death) – was chilling in her recognition of ‘the end’ (pluralistically), but it was a shame that some in the audience clapped into the dying embers of that final in-the-beginning chord, for sound remained audible (just) and Boulez still had his hands in the air controlling duration. Indeed he conducted Pli selon Pli with the same meticulousness with which he had notated it all those years ago, beauty and disturbance ‘folding’ one to another (and referencing a nod to Messiaen and a link to Birtwistle), and now his own experience of the music as creator, interpreter and reviser seems to be ‘at peace’ but with no resting on laurels. It was a privilege to be present at this performance.