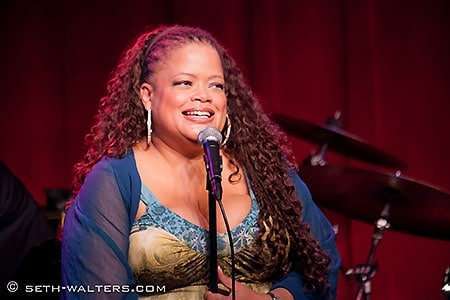 Natalie Douglas had a great success last year making her debut at The Crazy Coqs performing a tribute to Nina Simone. She makes a welcome return featuring the lives and songs of four women – Simone again, plus Billie Holiday, Lena Horne and Abbey Lincoln. All four were not only phenomenal song stylists but also brave, independent women and staunch activists. Though part of the evening inevitably deals with their battles they had to maintain dignity and equality, it is far from being downbeat for it is primarily a celebration of their achievements and artistry. I can think of few performers who maintain such a joyous rapport with their audience, Douglas’s bubbly vivacity lights up “this beautiful jewel-box of a room.”

She does not try to imitate the ladies in question, but brings her own flair to the numbers, her voice strong and secure – emotionally throat-catching and cheekily humorous. She opens unconventionally with a ballad – one of the greatest, Jerome Kern & Oscar Hammerstein II’s ‘Can’t help lovin’ that man’ from Show Boat, sung by Horne in MGM’s biopic of Kern. (One might take issue with her statement that Horne wanted to play Julie in MGM’s film version of the musical, since a key factor of the plot is that Julie passes for white.) Douglas does a soaring version of Harold Arlen & Ted Koehler’s ‘Stormy weather’, a signature song of Horne’s, though it had been introduced at the Cotton Club many years earlier by Ethel Waters. Douglas tells an amusing story of Horne’s idolising Waters and her pleasure when learning that they would both have roles in the film, Cabin in the Sky. On the first day of shooting she discovered that Waters hated her!

Douglas highlights the songwriting skills of three of her subjects. Holiday shares with Arthur Herzog the credit for the bitter ‘God bless the child’, inspired by young Holiday’s being refused money by her mother, a minister, but Simone and Lincoln were the most prolific of the four. The first civil-rights song that Simone wrote was one of the most rousing, the scathing ‘Mississippi Goddam’, a spine-tingling highlight with its seductive fast-rolling rhythm and potent interruptions of “Go slow” from Mark Hartman. Simone wrote the number after four children were killed in a church targeted by the Ku Klux Klan. She also wrote ‘Four women’, a compelling account of African-American women whose lives were shaped by their background of slavery. Douglas also includes the stark classic inspired by lynching, Abel Europol’s ‘Strange fruit’, honoured by the record industry, and from Lincoln’s catalogue she delivers ‘Throw it away’ and the pulsating ‘Wholly Earth’.

A musical version of James Thurber’s The Secret Life of Walter Mitty, which ran off-Broadway in 1964 with a score by Leon Carr and Earl Shuman, provides Douglas with the engagingly humorous ‘Marriage is for old folks’, which states of marriage, “Whaddya got? Two people watching TV.” When it comes to standards, Douglas displays impeccable taste, with Arlen & ‘Yip’ Harburg’s ‘Happiness is a thing called Joe’, Irving Berlin’s ‘Say it isn’t so’, Rube Bloom and Johnny Mercer’s ‘Day in, day out’ and the haunting ‘Mr Bojangles’, which Douglas points out was not written as an homage to Bill Robinson but was conceived in a prison cell by Jerry Jeff Walker. As Douglas approaches the end of her beautifully structured act she announces her final number, quipping, “which in true cabaret tradition means my final two numbers”. We would have happily settled for a dozen more.