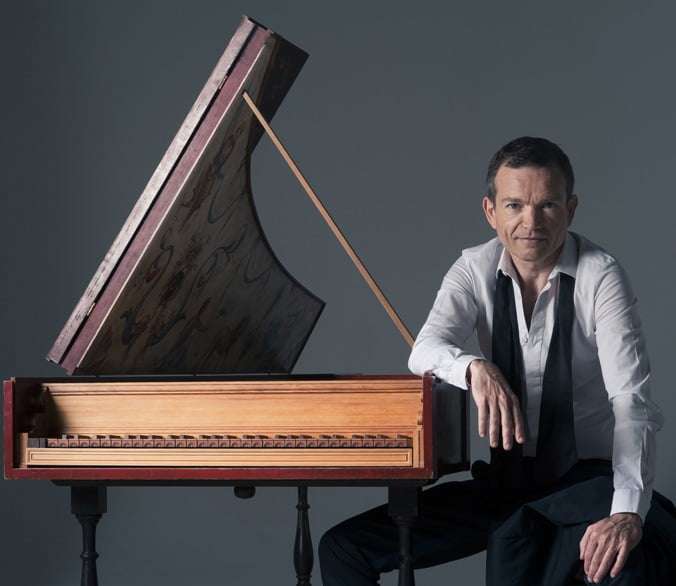 Debussy is not the only significant French composer with an anniversary in 2018 – the birth of François Couperin 350 years ago gave an excuse for this examination of the most prominent member of a family who were as important in the musical life of their country as the Bachs were in theirs. To the general music listener, however, Couperin (1668-1733) is probably rather more of a textbook name than an actually-experienced composer. That has to do with the fact that, as mentioned by Christophe Rousset in the panel discussion with BBC Radio 3’s Andrew McGregor, and Berta Joncus, his undoubted achievement in writing sensitively and idiomatically for the instruments of his time – above all the harpsichord – has meant that his music is more limited in impact in that it hasn’t attained the same widespread appeal of his contemporaries, J. S. Bach, Handel, and Domenico Scarlatti, whose musical styles translate rather more flexibly and easily to the pianoforte. But, Rousset also justly argued, Couperin revolutionised the way in which the harpsichord was played – his music is not flashy, but sophisticated and charming nonetheless, with an emotional content that speaks straight to the heart, and not just written for entertaining the king!

Rousset demonstrated that in the first concert of this Couperin Day not least in the Septième Ordre of harpsichord pieces from Deuxième Livre of the Pièces de clavecin (1717), which essentially presents a musical portrait of one of his pupils, Françoise-Charlotte de Senneterre Ménétou. Its eight movements depict different facets of her life and character, which Rousset articulated with what may be regarded as a suitably feminine grace, notably with seamless chains of ornaments in the melodies even extending, unexpectedly perhaps, to the bass line of the first movement.

But otherwise what stood out in Rousset’s interpretation, and the other works programmed here, was the fine balance in texture and timbre between the registers of the left and right hands: in other words an appropriate French finesse which is a distinctive, almost indefinable quality which sets it apart from the other national styles of music-making in the Baroque period, requiring sympathetic, dedicated advocacy if not exactly special pleading. That fine integration of sound was also due to the modern copy of the Donzelague harpsichord which Rousset played (an instrument which Couperin himself used). Across its five octaves it spoke with crisp clarity, not as resonant as some harpsichords, but ideally capable of creating the smooth, slurred lines which Rousset referred to as a quintessential feature of Couperin’s style as compared with the more emphatic, chord-based texture of the Germanic school.

The underside of the harpsichord’s lid was adorned with a landscape painting in the style of the Italian-influenced and -trained artists Claude Lorraine and Nicolas Poussin. As such it happened to allude neatly to Couperin’s own artistic mission in bringing French and Italian musical tastes together, most explicitly in his 1724 Les Nations, subtitled ‘Les Goûts-réunis’. In the Cinquième Concert violinist Gilone Gaubert-Jacques on the violin tended to emphasis the French style, with her warm but unobtrusive playing, rather than projecting a bright Italianate colour – hence her withdrawn, coy character for the ‘Prélude’, trills cheekily deployed in the principal melody of the ‘Allemande’, and gentle detached notes in the ‘Musette dans le goût de carillon’ to suggest the bells referred to. In the Troisième Concert of the Concerts royaux (1722), Gaubert-Jacques juxtaposed the two styles more starkly, alternating between fast, forward-driven phrases and more yearning, longer-breathed ones (in the ‘Allemande’ particularly). If the ‘Sarabande’ sounded wan, it was appropriate for the movement’s sobbing mood; and a slightly rough edge in her timbre at times matched the rustic character of the ‘Musette’.

Eugénie Warnier sang three songs or Airs sérieux with artful simplicity, but some vibrato, to express their themes of unfulfilled or thwarted love. Throughout these and the two Suites before, Kaori Uemura-Terakado executed the usually more slow-moving, sedate continuo bass line on the viola da gamba with admirable composure and restraint.

At the beginning of the second concert, Uemura-Terakado deservedly came to the fore in the Première suite from Couperin’s late collection, the Pièces de viole (1728) in which he sought to emulate his contemporaries Jean de Sainte-Colombe, the Forquerays, and Marin Marais in their works for viola da gamba – an instrument which was still preferred in France at that time over the cello. The opening ‘Prélude’ was mournful and suggested a sense of struggle, succeeded by a fuller-toned ‘Allemande’, but she drew a resonant timbre from her instrument in all seven movements, ending with a broad but increasingly feverish ‘Passacaille’.

Two further extracts from the Pièces de clavecin – ‘Les Idées heureuses’ from the Premier Livre (1713) and ‘Les Ombres errantes’ from the Quatrième Livre (1730) – continued to profile Couperin’s achievements at the harpsichord. The former exemplifies the characteristic style brisé or broken-chord method in which no melodic line prevails but the whole texture arises from the web of interlocking parts sounding at different times as they elaborate the underlying harmonies, as shown in Couperin’s most famous keyboard movement, ‘Les Barricades mystérieuses’, and in so many Preludes of the Well-Tempered Clavier or the ‘Gigue’ of his B-flat Partita (BWV825) for keyboard by Bach who was influenced by this style. For Rousset ‘Les Idées heureuses’ was the means to display impressive dexterity within an atmosphere of graceful balance and order. In contrast ‘Les Ombres errantes’ was like a spectre of Couperin’s earlier, more ornamented pieces, with its sparser material, reflecting on mortality and whatever legacy the elderly composer might leave behind, met by Rousset with sombre, studied character.

The culmination of this celebration of Couperin’s art was a performance of probably his best-known work, and one of the glories of Baroque religious music, the Leçons de ténèbres (1713 & 1717) drawing together the strands in this diptych of two concerts pairing the themes of “Lumière” and “Ombre” – light and shade. That marked the contrasts between the public, virtuosic aspects of Couperin’s professional life, and his personal reticence; his secular and sacred music; instrumental and vocal works; and the influence and attraction of the French and Italian styles in his compositional make-up. That dichotomy was physically enacted, too, in the re-creation of the extinguishing of candles after each verse of this setting of the Old Testament Lamentations of Jeremiah, following the practice of the Roman Catholic Church in the Tenebrae services held in Holy Week.

Rousset had explained that he approaches the Leçons in an operatic manner, which some listeners may perhaps consider would be more extravagant than the approach taken by the nuns of the convent abbey of Longchamp for whom the work was originally written, or contrasts it with the more meditative interpretation brought to bear by other performers of this work in recent times. But the expressive music can certainly withstand such a realisation – indeed its drama and fastidious word-setting may positively demand it – and it creates a tantalising glimpse of what an opera by Couperin might have sounded like. Rousset accompanied the performance here from a chamber organ for the exquisite melismas of the Hebrew words which herald each verse (the original Hebrew text is an acrostic poem, and musical settings defer to that with the intonation of each successive letter accordingly) and for the more solemn, sustained sequences of the setting; but in the more direct, dramatic declamation of the text he turned to the harpsichord, thereby structuring the work as something like a Baroque opera seria with its alternation of terse recitatives to drive the narrative, and more melodious arias to reflect more deeply and emotionally on the given situation.

Céline Scheen was bright and clear-toned in the first Leçon, bringing notable dramatic interest where appropriate, particularly in the final, urgent reiteration of the concluding exhortation to Jerusalem (“turn to the Lord your God”), although initially she was a little vocally tense on the first couple of Hebrew letters. Warnier returned to this concert for the second Leçon, making an astute match for Scheen in her radiance of tone. If listening blind it might have seemed that it was the same soprano singing, though Warnier achieved a slightly more seamless line and a touch creamier timbre, whilst her Gallic enunciation of the Latin text was also just a little more pronounced.

Rousset impelled the third and final Leçon (in which the two sopranos come together) with a gentle lilt, instilling more rhythmical vigour but otherwise decreasing the emotional temper of the music: the intertwined melismas on the letters were supple, rather than indulgent or precious. The one, well-judged, dramatic contrast was the outburst of fury on the ‘Lamed’ verse (“O vos omnes”) in which the singers sounded like sparring partners in a fractious duet.

Lovers of early music will presumably already know at least some Couperin, but there is a sizeable treasure-trove still to discover as these concerts revealed. Those who are less conversant will find in Couperin’s music a wide resource of refined pleasure, and knowledge of it will contribute to a more diverse and stimulating appreciation of the music of the Baroque period, in which the Italian and German still stand prominent. On either side, many listeners will surely make further enjoyable discoveries as 2018 proceeds, and the Barbican Centre’s project was an engaging introduction.