Since its inception in 2001, the Jette Parker Young Artists Programme has given dozens of young singers, directors and conductors from all over the world the opportunity to develop their careers with The Royal Opera. The artists spend two years within the Royal Opera House during which time they sing small roles and cover the main ones in Royal Opera productions. Every year the artists give a Summer Concert giving the public the opportunity to follow their progress. 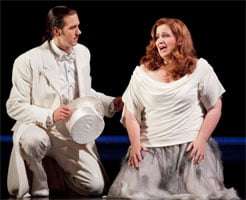 The excerpts from the three operas were all skilfully designed to showcase the talents of the individual artists as well as their abilities to work in ensembles. These excerpts are not concert performances but the staging was minimal which puts even more emphasis on vocal and dramatic interpretations. The first act of “Don Giovanni” leaves little room to hide so it was unfortunate that the minimal direction of Thomas Guthrie often left the singers looking rather exposed against the vast stage.

Guthrie’s ideas promised much but this was, in reality, an entirely conventional and slightly unimaginative production. Setting it in the 1920’s, circa, Guthrie’s opening idea of placing a shadowy Giovanni at the rear of the stage while passers-by with umbrellas crossed in front of him seemed initially a good idea – but after the six minutes or so of the overture, a trifle repetitive. 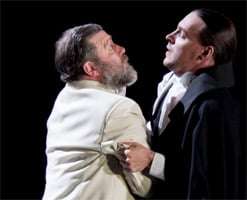 Kostas Smoriginas is fine singer, equipped with a strong, firm and suitably dark bass-baritone for the Don, handling the demanding ‘Champagne Aria’ with consummate ease. But his characterisation of Giovanni was rather dull – suitably rakish but lacking the seductive charm and unscrupulous glint to make us believe he had bedded thousands of women. Vuyani Mlinde’s seemed more at ease with Leporello, in turns cowardly, amusing and teasingly flirty with Donna Elvira. He has a powerful stage presence, fine comic timing and possesses a powerful, rich bass-baritone voice. Simona Mihai’s Zerlina was delightfully innocent and knowing with a lovely open quality to her voice. Pumeza Matshikiza’s Donna Elvira was a solid enough performance as was Anita Watson’s Donna Anna. Robert Anthony Gardiner’s Don Ottavio lacked presence but ‘Dalla sua pace’ was sweetly sung if without expanse. Rory Macdonald and (a welcome guest) the Orchestra of Welsh National Opera provided solid support but Zerlina and Giovanni’s ‘La ci darem la mano’ could have sounded more delicate.

The concert’s second half kicked off with Dominic Grier conducting a full-blooded account of the Overture composed for a production of “Phèdre”, an appropriate curtain raiser to excerpt from Act Three of “Werther” (heard in the 1902 revision). Here Guthrie’s conventional stage-setting and direction paid dividends, allowing the drama of Charlotte and Werther’s love-scene to unfold naturally. Monika-Evelin Liiv’s Charlotte was deeply felt. At times her performance was a little old-fashioned and mannered, reminiscent slightly of Renata Tebaldi, but this almost seemed to enhance the sense of emotional repression. She had little difficulty in projecting her powerful and rich mezzo voice, which on occasion could sound strained in the upper registers. Simona Mihai’s soprano was fresh and open as Sophie, Charlotte’s sister. Changhan Lim as Werther was more relaxed than he had seemed in “Don Giovanni”. Werther’s desperation was portrayed with dignity and restraint without undue histrionics. Lim’s baritone is a sweet instrument but it’s a small voice and somewhat chesty. He wasn’t helped by Daniele Rustioni’s conducting, which although full of passion, tended to drown-out the singers in tuttis.

The concert’s finale was the blazing confrontation between Manon Lescaut and Des Grieux in the chapel of Saint-Sulpice in Act Three of “Manon”. Guthrie’s production was again minimal allowing Eri Nakamura’s Manon and Ji-Min Park as Des Grieux virtually the whole stage in which to work. The two were as passionate a couple as one could wish for: Nakamura touchingly vulnerable as the woman pleading for forgiveness from her lover. Her voice, although strong and secure in the upper registers, lacked expressiveness and was strident in the climaxes. Ji-Min Park projected well; you could never doubt the hurt as the rejected Des Grieux, but there needed to be more subtlety, his twisted facial contortions and seeming inability to sing anything quieter than fortissimo lending the scene a rather one dimensional feel. Rory Macdonald and the Orchestra were first class though.