Skip to content
LnRiLWNvbnRhaW5lcltkYXRhLXRvb2xzZXQtYmxvY2tzLWNvbnRhaW5lcj0iNmIzNDMzNmNmZTc3NWZiNGJlMTVjMmIwMzU3NWM1MjYiXSB7IHBhZGRpbmc6IDI1cHg7Ym94LXNoYWRvdzogNXB4IDVweCAxMHB4IDAgcmdiYSggMCwgMCwgMCwgMC41ICk7Ym9yZGVyOiAycHggZG90dGVkIHJnYmEoIDEwOSwgMTA4LCAxMDgsIDEgKTsgfSAudGItZmllbGRbZGF0YS10b29sc2V0LWJsb2Nrcy1maWVsZD0iODM3Y2ExZjc0MGRjZDdkOTdlMzQzOWMyYjIwMWZmZTMiXSB7IGJhY2tncm91bmQtY29sb3I6IHJnYmEoIDIzOCwgMjM4LCAyMzgsIDEgKTtwYWRkaW5nLXRvcDogMTBweDtwYWRkaW5nLWJvdHRvbTogMTBweDtwYWRkaW5nLWxlZnQ6IDEwcHg7IH0g
LnRiLWNvbnRhaW5lcltkYXRhLXRvb2xzZXQtYmxvY2tzLWNvbnRhaW5lcj0iNmIzNDMzNmNmZTc3NWZiNGJlMTVjMmIwMzU3NWM1MjYiXSB7IHBhZGRpbmc6IDI1cHg7Ym94LXNoYWRvdzogNXB4IDVweCAxMHB4IDAgcmdiYSggMCwgMCwgMCwgMC41ICk7Ym9yZGVyOiAycHggZG90dGVkIHJnYmEoIDEwOSwgMTA4LCAxMDgsIDEgKTsgfSAudGItZmllbGRbZGF0YS10b29sc2V0LWJsb2Nrcy1maWVsZD0iODM3Y2ExZjc0MGRjZDdkOTdlMzQzOWMyYjIwMWZmZTMiXSB7IGJhY2tncm91bmQtY29sb3I6IHJnYmEoIDIzOCwgMjM4LCAyMzgsIDEgKTtwYWRkaW5nLXRvcDogMTBweDtwYWRkaW5nLWJvdHRvbTogMTBweDtwYWRkaW5nLWxlZnQ6IDEwcHg7IH0g
Britten
Death in Venice, Op.88 – Opera in two Acts to a libretto by Myfanwy Piper based on the novella by Thomas Mann [sung in English with English surtitles]
LnRiLWNvbnRhaW5lcltkYXRhLXRvb2xzZXQtYmxvY2tzLWNvbnRhaW5lcj0iNmIzNDMzNmNmZTc3NWZiNGJlMTVjMmIwMzU3NWM1MjYiXSB7IHBhZGRpbmc6IDI1cHg7Ym94LXNoYWRvdzogNXB4IDVweCAxMHB4IDAgcmdiYSggMCwgMCwgMCwgMC41ICk7Ym9yZGVyOiAycHggZG90dGVkIHJnYmEoIDEwOSwgMTA4LCAxMDgsIDEgKTsgfSAudGItZmllbGRbZGF0YS10b29sc2V0LWJsb2Nrcy1maWVsZD0iODM3Y2ExZjc0MGRjZDdkOTdlMzQzOWMyYjIwMWZmZTMiXSB7IGJhY2tncm91bmQtY29sb3I6IHJnYmEoIDIzOCwgMjM4LCAyMzgsIDEgKTtwYWRkaW5nLXRvcDogMTBweDtwYWRkaW5nLWJvdHRvbTogMTBweDtwYWRkaW5nLWxlZnQ6IDEwcHg7IH0g 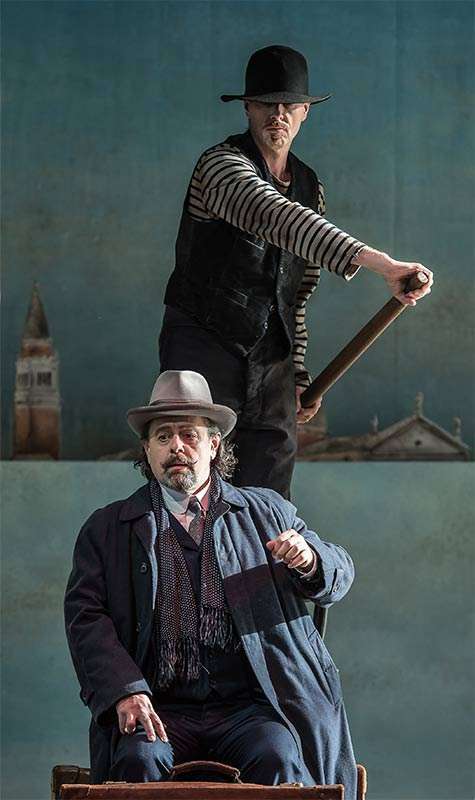 Benjamin Britten was in his element when expressing the ambiguous, and in his final opera – about the famous, blocked writer who loses himself in desire for a beautiful youth and love in the time of cholera – he treads a tightrope of self-confession, allusion and understatement with breathtaking assurance. However hard Paul Curran’s often brilliant new staging pulls in the opposite direction, Death in Venice still asserts its oblique subtlety in explaining the process of creativity.

In his set design, Kevin Knight has taken minimalism to extremes – blue lagoon merging into sky, the occasional glimpse of Venice as seen from the Lido, a few potted palms and rattan chairs to conjure the Hotel des Bains and the beach, and, as in Deborah Warner’s ENO staging, an important role for billowing gauzes that mark the swift scene-changes and crucially form the veil separating Gustav von Aschenbach from his dream-like Dionysian death-wish. It all works fluently, with the turn-of-20th-century elegance fixed by the excellent costumes.

Where Thomas Mann, Britten and Myfanwy Piper imply, though, Curran has imposed an assertive malevolence. On the boat to Venice, there’s no doubt about the young sailors’ aggressive sexuality, grotesquely extended in the burlesque put on by the strolling players and by Aschenbach’s “rejuvenation” at the hands of the hotel’s demon barber. It is as though Curran was injecting the work with a lethal Expressionist virus that strengthened after the beautifully staged ‘Games of Apollo’ that ends the first Act. 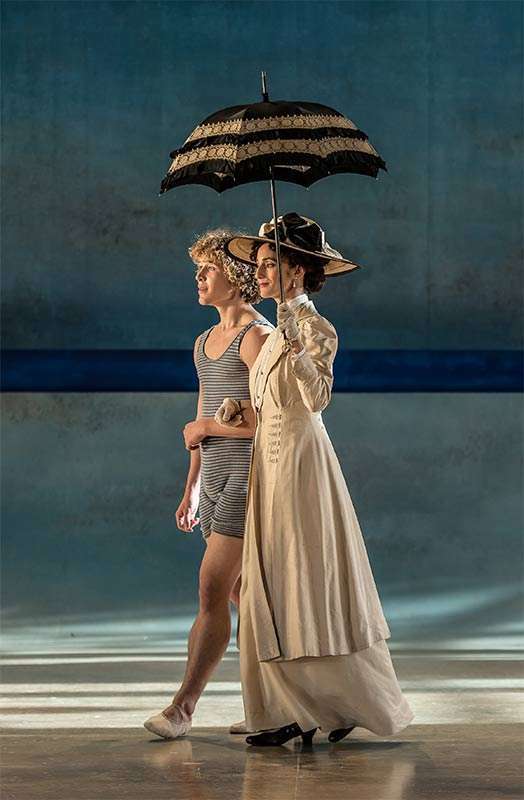 The role of Aschenbach, in effect a two-Act scena for tenor, has a distinguished roster of artists, and Paul Nilon, his debut in the role, is nearly in the top league. He was superb in portraying the creative vacuum in which Aschenbach is stuck, the fussy, self-protective logorrhea that reveals nothing except his repression and vulnerability, and the writer’s pathetic disintegration. The weariness resulting from self-discipline and isolation were present from the start, which made the “I, Aschenbach” declamations all the more impotent. Nilon’s voice isn’t as purely beautiful as some in the role, and he kept a lid on any elaborate pointing of the words, so that his forlorn “I love you” to Tadzio sounded all the more wretched. It is though one of the most abstract, introverted portrayals I’ve witnessed, and I particularly admire the way his objective narration of the recitative passages (expertly accompanied by pianist Frances Hills) leaked into subjective intensity. It was a tour de force portrayal of Apollonian defences crumbling before our eyes and ears.

I was, though, less convinced by Tadzio. Celestin Boutin was an accomplished, muscular dancer, but with a knowing, pouting flirtatiousness rather than the aloof, mythic ambiguity through which Aschenbach channels the gathering definition of his self-destructive desire, and Boutin lacked the contrast with the group of similarly strapping young male dancers who celebrate healthy teenage bravado. In general, the dance element was pointlessly extended, with an odd, twitchy mime episode for Tadzio’s mother at the start of Act Two, but its effect remained strongest in the finely choreographed ‘Games’ and the Apollo-Dionysus dream sequence.

In the seven-part role of Traveller, Elderly fop, et al, who guide Aschenbach’s nemesis, William Dazeley connected with the supernatural element brilliantly, even if he was less convincing as the raddled old queen on the boat or as the leader of the strolling players. His singing was incisively tailored to each character, and his voice had a consistent, oily darkness.

In the smaller roles, countertenor Tom Verney’s Apollo was finely sung, though you do wonder if Britten might have re-worked the role had he lived longer. Henry Manning and Joshua Owen Mills were respectively excellent as the English clerk, who advises Aschenbach to leave plague-ridden Venice as soon as possible, and the unflaggingly obsequious Hotel porter. The parade of hotel guests, gondolieri and other vignettes was vividly directed and sung.

Steuart Bedford, who conducted Death in Venice’s premiere 42 years ago, knows the score inside-out, and whatever passing misgivings about the staging, I was again lost in wonder at Britten’s acuity in creating impressions out of the barest of means and at the hallucinogenic rapport between words and music. Bedford’s skill at joining it all together, matched by wonderfully intimate and intuitive playing, was as much a labour of love as of genius.