Humperdinck
Hänsel und Gretel – opera in three acts to a libretto by Adelheid Wette after the fairytale by the Brothers Grimm [sung in German, with English surtitles] 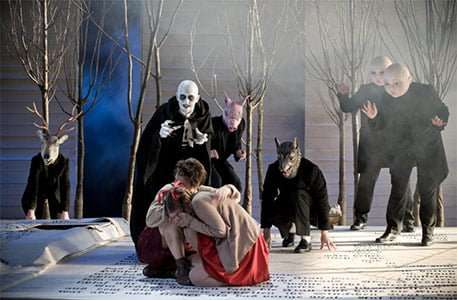 There’s no meta-textual concept to bash you over the head in Olivia Fuchs’s new staging of Humperdinck’s hardy perennial and summer-opera-festival favourite, nothing about greed, abandonment or abuse that isn’t already embedded in the work itself. Yet it has an edge that keeps it from being sucked into a folk-tale comfort zone. The main element in designer Niki Turner’s fixed set is a huge book, in effect the stage, open at the title page of an old German edition of the Grimm Brothers’ collection of stories, with giant pages that turn over to reveal pop-ups of the children’s home and the witch’s gingerbread house.

It was very much in the spirit of ‘once-upon-a-time’ – like the leather-bound volume that magically opens to set the ball rolling in a Disney cartoon – but this is quickly subverted by the five white-faced angels dressed in black who are present throughout. They literally turn the pages of the drama while doubling up as stage-hands and forest spooks. These five men-in-black (two women and three men, in fact, but all looking identical) are benign, but their manipulation of the story has a sinister, beautifully choreographed objectiveness, which extended beyond the theatre as they silently moved among the audience during the interval, possibly as a warning against the pitfalls of over-consumption. 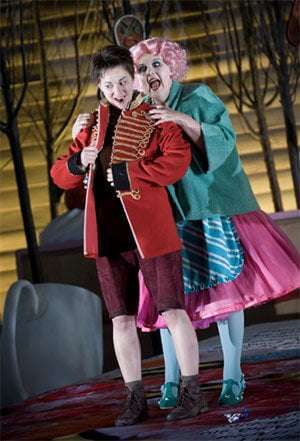 During the Overture, one of the angels creates a paper trail of pages torn out of the storybook that entices Hänsel and Gretel away from the limited, virtual world of the flickering 1950s’ telly they’re glued to (and which is parenting them), into the deep, dark forest of experience. I wondered where Fuchs was going with this, and had to wait for the end, when the Witch’s other victims were revealed gathered round the same small screen, in a state of suspended animation and ready for their release into the real world. She made the point with admirable concision – deny imagination at your peril. And there was a sting in the tale – Hänsel and Gretel and their absentee parents aren’t joyfully reunited in the finale, and the two children can now see the angels (it was clear they couldn’t before). The children have moved on, beyond the reach of their parents.

Fuchs has honoured the familiar power of fable and a child’s view of the world, realised with brilliant, cartoon-like precision by Turner’s designs that directly evoke want or plenty – giant licorice allsorts and cup-cakes after the dream – with a realistic forest for kids to get lost in, and with disquieting, adult hints of other possibilities – for a moment the gingerbread men hanging in the trees reminded me of Goya’s Disasters of War. Apart from the ‘Witches’ Ride’ (between the first two Acts, showing the squadron of children rescued in Act Three wandering into the forest), which was a visual muddle, the interaction of humans and angels worked a special magic, with a particularly touching ‘Pantomime’.

Hänsel and Gretel proved to be an indomitable pair, dressed as an old-fashioned cosy ideal of German children, all wholesome pigtails, smocks and lederhosen. Claudia Huckle’s rich, supple mezzo was a great pleasure, and her movements and mannerisms gave Hänsel an appealing authenticity. Anna Devin was equally impressive as Gretel, and her light, firm soprano had reserves of power for the orchestra-riding passages. The parents (William Dazely and Yvonne Howard) were both well sung, the father more incisively directed than the mother. The Sandman (Rhiannon Llewellyn) and Dew Fairy (Ruth Jenkins) were both beautifully sung and suitably magical – the latter’s costume an astonishing creation.

As the Witch, Susan Bickley was an awesome blend of Fanny Cradock bile and Barbara Cartland frosted pinkness, and she sang and acted with lubricious glee. The orchestral sound was hardly sumptuous, but it had plenty of colour and character, expertly brought out by Martin André. I thought a wind machine had been brought in to animate still further the ‘Witches’ Ride’ – but it was the real, stormy thing, making its entrance with perfect summer timing.