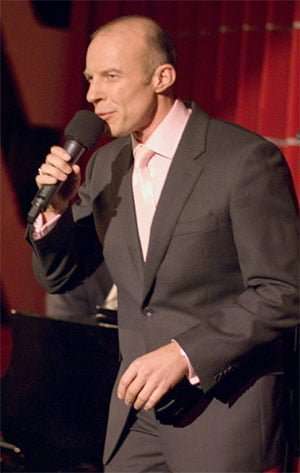 There are joyful noises coming from the Crazy Coqs cabaret room at the moment, for Gary Williams is back with his easy-on-the-ear renditions of great Tin Pan Alley songs that have rarely sounded better than when given his gently swinging and slightly jazz-tinged interpretations. Williams is best known for his long run in the musical, The Rat Pack, in which he played and sang Frank Sinatra. On a previous visit to The Crazy Coqs he performed Sinatra material. Now he has a brand-new programme dedicated to the inimitable Nat ‘King’ Cole.

Like Sinatra, Cole excelled in both silkily romantic songs and up-tempo swing numbers. The first commercial disc he recorded was the groovy ‘Straighten up and fly right’, which he composed with Irving Mills. He had countless hit singles, and made many albums with such arranger-conductors as Nelson Riddle and Billy May. Williams includes some of the album titles to give his selection a solid base of standards, such as his opener, a driving interpretation of Irving Berlin’s ‘Let’s face the music and dance’. Two other Berlin songs are included, along with the Gershwins’ ‘Our love is here to stay’, Cole Porter’s ‘Just one of those things’, Rodgers & Hart’s ‘This can’t be love’ and ‘Thou swell’, and that frisky paean to optimism, Jerome Kern and Dorothy Fields’s ‘Pick yourself up’.

But it’s the hit-parade singles that one best remembers, imprinted with Cole’s trademark style. ‘Too Young’, ‘Unforgettable’ and ‘Mona Lisa’ stayed at the top of the charts for countless weeks. Williams reveals that the singer at first refused to record ‘Mona Lisa’, feeling uneasy about its allusions to classical art, but the release went on to sell a million copies and more and the song itself won an Oscar. Ian Grant and Lionel Rand wrote ‘Too young’, which spawned a bunch of other songs with ‘young’ in the title. Cole was particularly proud of his album – Cole Sings, Shearing Plays – and from it came the hit, ‘Let there be love’, with its defining key-stabbing playfully reproduced by Williams’s fine accompanist and arranger, Matt Regan. Another hit album, Love Is the Thing, produced the silken ‘Stay as sweet as you are’ plus another number that will also forever belong to Cole, ‘When I fall in love’.

Williams establishes great rapport with the audience, and has no trouble getting us to reproduce playful groans to punctuate the cha-cha-cha rhythms of ‘Papa loves mambo’. Later he coaxes some more ambitious participation during a seductively toe-tapping arrangement of Bobby Troup‘s classic, ‘Route 66’. Rapport is further established through anecdotal material. When Williams was about to fulfil an engagement in Japan, he found he was expected to sing something in the home language. So, with only three days’ notice, he learned the song ‘L-O-V-E’ in Japanese. He sings us the intriguing and charming result. For another gig he gave it in German!

Williams shares facts about Cole, whose life seems to have been fairly blameless, but he was something of a philanderer, and his first marriage (at age 17) ended after eleven years, though his second endured to his death. Saddest of all but inevitable for an entertainer of Cole’s time, was the prejudice that stifled aspects of his career. He had a television series in the 1950s, in which he was joined by impressive guests, including Peggy Lee, Betty Hutton, Mel Tormé and June Christy, but it was cancelled through lack of sponsorship because manufacturers were nervous about displeasing their customers, prompting one headline to state, “Madison Avenue is afraid of the dark”. Channel 4 showed some of these 30-minute gems a few years ago and they were splendid. Fortunately the music industry was liberal, and Cole was able to maintain a steady output of vinyl.

Other Cole triumphs lovingly given by Williams include ‘Somewhere along the way’, ‘Walkin’ my baby back home’, ‘Orange colored sky’, ‘Rambling Rose’ and ‘Smile’. Williams’s favorite is the hauntingly mystical ‘Nature boy’, written by Eden Abbez stressing the importance of giving and receiving love. Equally significant is the beautiful ballad, ‘For all we know’, stressing the inevitability of transience, with its blunt declaration that “tomorrow is meant for some”, and it’s the number with which Williams closes this feast of popular song.