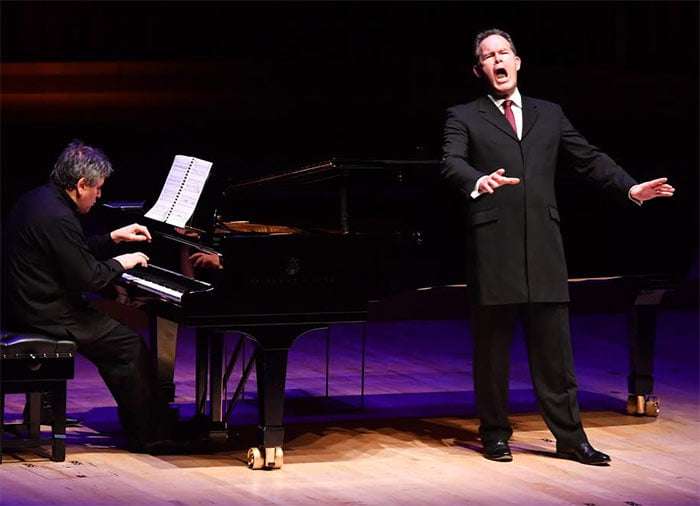 An eclectic programme of classics and rarities from Gerald Finley and Antonio Pappano opening with Beethoven’s ‘Adelaide’, with its shifting moods and growing intensity, verges on the operatic. It suits Finley’s communicative baritone down to the ground, although he took a few minutes to warm, and it was a demanding opener. The poet describes the beloved reflected in every facet of Nature and Finley’s command of word and nuance was transporting. Two Italian settings followed, sombre and despairing vocally. ‘Der Kuss’ offered perfect comic timing.

The menu continued with Liszt’s Three Petrarch Sonnets, further sad-love poetry, lighter in texture and allowing Pappano free rein for expressive embellishment. ‘Benedetto sia’I giorno’ and ‘Pace non trova’ built the emotional momentum nicely and Finley drew us into the tortured state of the poet and his bittersweet protestations of love and grief, subtly emphasised by physical gesture as well as immaculate phrasing and powerful dynamics.

The first half concluded with Respighi’s Quattro arie scozzesi. The composer took unadorned Scottish folksongs and wove an accompaniment ornate and with surprisingly dissonant growling rhythmic patterns to imitate traditional instruments. One cannot help but be reminded of Britten’s folksong settings; could he have known Respighi’s, penned in 1924? Particularly effective were the upbeat ‘When the kye come hame’ and Burns’s ‘My heart’s in the highlands’.

To open the second half, Ravel’s ‘Chanson de la mariée’ has a wonderful uplifting melody, sung with immediacy and lightness of touch. The composer’s Chants populaires followed, based on indigenous airs from France, Italy and Scotland, ‘Ye banks and braes o’ bonnie Doon’ having a startling minimal accompaniment. 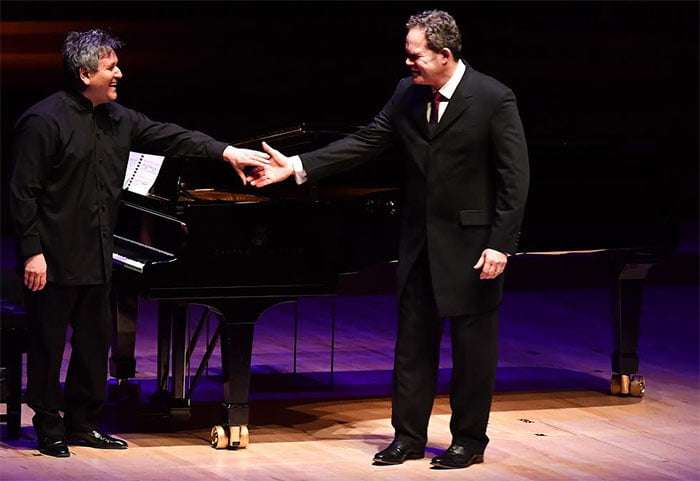 There was a change of gear for Shostakovich’s Six Romances (1942). There is nothing remotely romantic about these settings but each is a masterpiece, different in tone and intensity, conveyed by Finley with intelligence and fine theatricality. Using words by Raleigh and Shakespeare, and children’s rhymes, Shostakovich has evinced grim despair and black humour, and jaded political insight. These are songs for our times too. Stalin can’t have noticed the lines from Shakespeare’s Sonnet LXVI: “And gilded honour shamefully misplaced … And simple truth miscall’d simplicity…”.

The recital concluded on a lighter note with a selection of Neapolitan airs by Tosti, a fixture in Queen Victoria’s household, and who made settings of English poetry as well as Italian entertainments. Finley and his burnished voice carried all before him, ‘L’ultima canzona’ being particularly delightful.

As encores, the recently late Einojuhani Rautavaara’s setting of ‘Shall I compare thee to a Summer’s day?’ (from Three Sonnets of Shakespeare, Opus 14) and, most touchingly in the centenary of its heyday, Haydn Wood’s World War One song, ‘Roses of Picardy’.