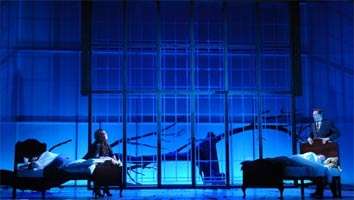 Murky skies lowered over the Sussex Downs as Glyndebourne revived its 2006 staging of Benjamin Britten’s ghost opera. If there was a chill in the air before the performance, a lot more chilling went on during it as Jonathan Kent’s insidious production unfolded. He sets The Turn of the Screw at the time of its composition, 1950s’ England, a short while before sexual intercourse began (according to Philip Larkin) but some way into the post-war decline of deference and duty; so, when an idealistic young Governess arrives at Bly to take on her young charges, Miles and Flora, the world she knows has already started to become less decorous. By updating the action to a recognisable era, and by characterising the malevolent Quint as a corporeal valet, recalling Dirk Bogarde in The Servant, Kent focuses more on moral turpitude than ghostly apparitions.

It is a curious story indeed, and a remarkable one. The appeal of Henry James’s tale of ghostly possession lies in its inherent ambiguity: are the spirits real or is the Governess beset by her own demons? James leaves that to the reader, and indeed he may not have known himself. There can be little doubt where Britten stood on the matter, though: a literal interpretation of the goings-on chimed like tuned percussion with his attraction to tales of innocence corrupted. Under his micro-management, librettist Myfanwy Piper conjured a text for Act One/scene eight (‘At Night’) that amounts to nothing less than a four-way crypto-seduction, male-on-male dominated (Miss Jessel’s luring of Flora is tellingly perfunctory beside Quint’s red-blooded come-ons). This makes Kent’s decision to set this scene within the privacy of Miles’s bathroom all the more daring, and the line “I am King Midas with gold in his hand” gains a disturbing twist as the ghost gathers the towel-wrapped boy into his arms. 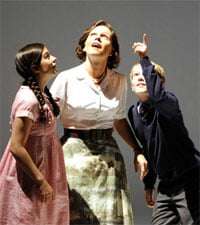 Paul Brown’s ingenious white-box designs are dominated by a massive high-tech window that swivels and slants to suggest a range of locations: the house itself both indoors and out, a greenhouse, a church and, in a brilliant evocation, the lake in which Miss Jessel drowned. A gnarled tree-branch flies above the action like a wraith on a broomstick. The opera’s multiple changes of scene are effected by an off-centre double revolve that recedes into the wings stage-right – an elegant device that Brown subsequently used in Kent’s short-lived West End production of the musical Marguerite.

The thirteen musicians in the pit must rank as the smallest outfit ever to bear the title of London Philharmonic Orchestra, but they play like a pride of lions in Jakub Hrůša’s exemplary interpretation. The Czech conductor enhances so many of the score’s marvels with his detailed reading that small reservations (like the wish for a richer summer haze from the oboe in the bucolic ‘Variation 3’) seem almost churlish. The proportionately tiny cast is similarly homogeneous and comparably excellent, not least the Swedish soprano Miah Persson, who has stayed on at Glyndebourne following her appearances as Donna Elvira earlier in the season in order to replace the indisposed (and happily pregnant) Kate Royal as the Governess. Persson’s diction is flawless and her rich lyric soprano is ideally suited to the growing intensity of the character. It is the Governess who has shrill moments, not the singer. 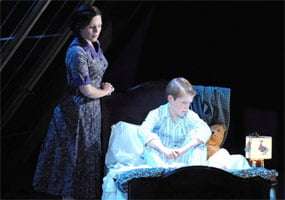 Toby Spence offers the clearest, deadliest vocal interpretation of Quint that I have heard since Graham Clark’s English National Opera account (in Jonathan Miller’s production) some thirty years ago. Clark has long been my benchmark for this role; yet Spence is a match for his predecessor and with his commanding stage presence he probably surpasses him. Whereas many tenors, from Peter Pears onwards, have weakened this role by playing up its ghostly shudders, it is Spence’s very directness that makes him so properly disconcerting. Susan Bickley transcends her dowdy costume (and some of Piper’s lumpiest lines) to lend unaccustomed power and dignity to the character of the housekeeper Mrs Grose, while Giselle Allen makes the most of the underwritten part of Miss Jessel, Quint’s fellow in death and partner in crime.

So much in this opera depends on the performances of the two children, and the current pairing is notably strong. As Flora, Joanne Songi returns to a role she first sang five years ago at a more appropriate age. She does well to disguise both her growing vocal maturity and her disparity in age with a genuinely twelve-year-old Miles. Thomas Parfitt takes this dramatically challenging and psychologically dark role with an aplomb that is (fittingly) beyond his years. His voice may be small, but his assumption of the role is extraordinarily mature. Consonant with his icy interpretation is the fact that his final words, “you devil!”, are delivered not to Quint but to the Governess. Or are they? There is ambiguity in this production after all.

This outstanding staging of The Turn of the Screw runs in conjunction with Glyndebourne’s much-acclaimed version of Dvořák’s enchanting Rusalka.