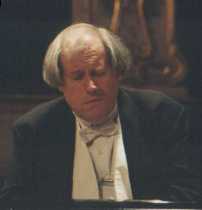 An air of frenetic expectation descended upon the Wigmore Hall on this evening including a serpent-like queue for returns and a swirling mass of audience members – including such luminaries as Evgeny Samoyloff, Trevor Pinnock, Alan Hollinghurst and Maxim Vengerov – all gathered to hear one of the most extraordinary performing artists of our time: Grigory Sokolov.

In more subdued lighting than is customary, Sokolov launched into a magnificent reading of Schubert’s Sonata in C minor, which in some ways established a temperature for the entire evening: sparing use of sustaining pedal, rapt attention to dynamic changes, formidable grasp of structure and some of the crispest, finely attuned staccato playing I’ve ever heard.

There were a few surprises in the Schubert other than a rather stormy Scherzo and a daringly slow account of the tarantella finale, which was so perceptively shaped, dramatic and convincing. None of Sokolov’s deviations from the ‘norm’ were affectation, but the result of a private communion with the composer, the audience a most welcome onlooker.

Scriabin’s Prelude and Nocturne, for left hand, was initially a bit more worrying – the lack of sustaining pedal (particularly in the Nocturne) robbed the music of its potential succulence and the overall effect was slightly choppy. However, Sokolov perfectly captured the flickering, insect-like energy of Deux Poèmes and was nothing short of masterly in the build up to the radiant yet terrifying climax of Vers la Flamme.

Occasionally Sokolov called to mind a contemporary account of the composer’s own piano-playing: “rubato, free, tense, nervous playing, hesitating in places, capricious…’. The two Scriabin sonatas that Sokolov played ideally complemented each other (from opposite poles of the composer’s career) and Sokolov once again proved himself to be ideally attuned to the ebb and flow of the music and the ‘modernism’ of the Tenth. The accelerando into the finale of the Third Sonata often counts for nothing but here there was an electrifying frisson as two different worlds became connected.

The evening was rounded off with a generous cluster of six encores: Scriabin Preludes and Études mixed with Chopin miniatures. Of the latter, Sokolov was scintillating in the Fantasia Impromptu in C sharp minor – it was as if the piece was cast in a single breath, with seamless transitions from the agitated opening into the lyrical outpouring of the middle section. Finally, there was a pulverising account of the Prelude in C minor (from the Opus 28 set) where the familiar was made to sound completely fresh. Sokolov played with force but didn’t batter the piano into submission either.

If each piece was a structural success, then the programme overall was similarly carefully judged in terms of architecture. A remarkable evening!