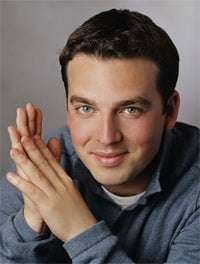 The world premiere of Edward Nesbit’s Kojata suited the accomplished Guildhall Symphony Orchestra down to the ground. The piece itself – frustratingly with no explanation of the meaning of the title – is an explosion of spiky fanfares and compacted shreds of melody force-fed into a shredder-like rhythm machine, with a brief moment of repose before the frenetic energy starts chasing its tail again. Under the similarly barbed, incisive conducting of Ben Gernon, the piece rejoiced in its whirling, shape-shifting identity, teasing the listener with glimpses of patterns before, magpie-like, skidding off in pursuit of other bright, restless ideas. Kojata is all about note-spinning, but note-spinning on a virtuoso scale, which showed off the Guildhall Symphony Orchestra’s brilliant, secure playing. Its gaudy exuberance was very infectious, and it felt like a high-speed collision between Stravinsky’s The Rite of Spring, Ravel’s Boléro and Varèse’s Amériques. Let’s hope the precocious, 23-year-old Nesbit can keep it up.

The shift of gear from that to the suave grace of Richard Strauss’s Serenade was a bit of a culture shock, but the 13 wind-players produced an airy, cultivated and well-balanced sound, and their performance deferred discretely to the work’s indebtedness to Strauss’s beloved Mozart, and to the B flat Serenade (Gran Partita, K361) for the same forces.

The young (30) New York conductor James Gaffigan comes armed with a very impressive CV, and apart from this Mahler 9 in London, he is also currently travelling round the UK conducting Glyndebourne on Tour’s “Falstaff”. On the evidence of the Mahler, he is an extrovert, but not in the terrifyingly intense Bernstein mode, and he drew some stunning playing from the GSO players. Any doubts as to the suitability entrusting a work that wraps a long meditation on the unravelling of symphonic form around a protracted farewell to life to such young musicians were, for the most part, dispelled.

This is very much a chamber symphony on a colossal scale. The solo and small-ensemble work was certainly technically within the reach of these gifted players, but the rather prosaic opening was a reminder of the degree to which this, probably of all Mahler’s works except for “Das Lied von der Erde”, depends on an almost unattainable level of intuition among the players. To experience a top orchestra passing the material around the players as an internalised dialogue, a subconscious realisation of the composer’s wishes, is unforgettable and very likely to be a once-in-a-lifetime event. Gaffigan had schooled the GSO in some very idiomatic playing – plenty of intentionally ironic, glutinous portamento from the strings, some echt-Viennese solos from the string-section leaders, assured and haunting woodwind solos and sumptuous brass-playing. The moment when the music seemed to be getting under the GSO’s skin and when the players really seemed to be responding to each other was in the passage of transcendent calm in the third-movement ‘Rondo-Burleske’. This anticipated the life-and-death tension of the finale, which was finely articulated by Gaffigan, with a beautifully played vanishing act of a coda.