Britten
Variations on a Theme of Frank Bridge, Op.10
Strauss
Horn Concerto No.2 in E flat
Shostakovich
Symphony No.5 in D minor, Op.47

A decade has passed since Mark Elder’s appointment as Music Director of the Hallé, this concert confirming that the conductor’s popularity with both orchestra and audience remains undiminished. And rightly so; the Hallé string section excelled in capturing the wildly differing characters explored within Britten’s Variations on a Theme of Frank Bridge. The work catapults through a potpourri of musical styles, each alluding to different sides of Bridge’s personality, from a Mahlerian funeral march to the neo-Baroque ‘Bourée Classique’. The importance of Mahler and baroque stylisations for Shostakovich, too, not to mention the predilection for wit and irony shared by both Britten and Shostakovich, made their pairing here a revealing one. Such satirical humour was keenly felt by the players, at their best as they revelled in the frivolity of ‘Aria Italiana’ and the virtuosity of ‘Molto Perpetuo’. 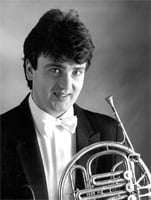 Richard Strauss’s Horn Concerto No.2 transported us from the playfulness of the 24-year-old Britten to a composer approaching his 79th-year in Nazi-ridden Austria, and seeking both refuge and inspiration in the music of his youth. Richard Watkins perfectly captured the nostalgic lyricism which characterises much of the work. Elder remained unobtrusive during the second movement, allowing for some sensitive ensemble playing in the conversational exchanges between horn and woodwinds. The finale, with its rapid broken chords, gave Watkins ample opportunity to show off his technical brilliance, at little expense to the richness of his tone. Indeed, if compelled to find fault, it would be levelled not at his playing but rather the relentless fidgeting to which he resorted in his bars of rest. Fortunate, then, that Strauss gives the soloist little opportunity for respite – a fact that seemed not to trouble Watkins, who demonstrated impeccable breath-control throughout.

Elder’s informative preamble to Shostakovich’s Fifth Symphony described a lesser-known feature of the work; the plethora of discreet references to Bizet’s “Carmen”, inspired by his passionate affair with Elena Konstantinovskaya (who had since married Roman Karmen).

Not prepared to ride on the popular appeal of this symphony, Elder tacked the work with a freshness that stood in stark contrast to the Hallé’s capable but somewhat tired rendition of the same work under André de Ridder last year. The strings, initially rather too polite, became a force to be reckoned with during some magnificent climaxes, skilfully navigated by Elder. In the delightfully quirky scherzo, the striking juxtaposition of playful motifs and aggressive, fortissimo passages was exploited to the full. A passionately-felt Largo, brimming with tension, gave way to an unbridled explosion of energy in the fourth movement. This power was often given extra body by an unusually prominent double bass section, joining the timpani to imposingly line the back of the stage. Taken at a steady tempo, the infamous coda maintained its emotionally-draining intensity to the very end. A personal triumph for Shostakovich, then, who succeeded in asserting the dominance of his own voice in spite of the constraints of Socialist Realism, and here, a triumph for the Hallé.