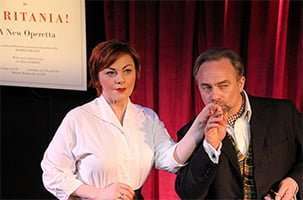 Gay’s the Word was the last musical composed by Ivor Novello, opening in 1951 with a cast headed by Cicely Courtneidge and running for over a year at the Saville Theatre in London. Few of Novello’s shows have been revived (though several of them were filmed) and this restoration is very welcome.

The show starts splendidly – with the promise of it being wickedly camp. It is Novello satirising himself. We see an excerpt from a new operetta with the cast lamenting that such fare has been quashed by the Americans, no more “Ruritania at Drury Lane-ia … Since Oklahoma!, we’ve been in a coma…”. It’s failing despite the presence of Gay Daventry (played with vim and vigour by Sophie-Louise Dann). Leaving the theatre, she is greeted by a sage with the words, “You’ve struck a dud”, a hilarious comment as delivered by Myra Sands. Daventry knows the show is beyond hope, cueing the first outstanding number, ‘It’s bound to be right on the night’, in which, with Alan Melville’s witty lyrics, she outlines the desperate optimism that show-people display when stuck in a flop. Daventry then accepts a chorus girl‘s offer of funds to start an acting school at a derelict house she owns on the cliffs of Folkestone, the benefactor played by the usually reliable Helena Blackman, here displaying an undernourished tone that fails to do justice to two beautiful ballads, ‘Finder, please return’ and ’On such a night as this’. 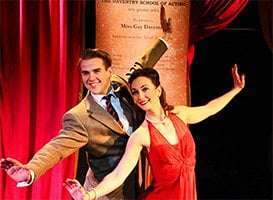 The book of Gay’s the Word, written by Novello, is a ramshackle affair, here “adapted” by Richard Stirling. The characters include the son of a millionaire, some waspish teachers, a pair of smugglers and the former love of Daventry’s life. The last element is ripe for developing – she has sung of her lost beau in ‘If only he’d looked my way’ and, when he re-appears (played by the suave Frank Barrie), a scene between them would seem inevitable, and give the show some needed sentiment and depth, but the relationship is resolved in a hopeful if cursory fashion, as is the smuggling operation.

Time and again it is the songs that come to the rescue – Josh Little, the engaging juvenile lead, has a Cole Porter-ish number listing styles of courtship in ‘An Englishman in love’, plus the lilting ‘A matter of minutes’, and Dann has two more great numbers, ‘Bees are buzzin’’ and the score’s showstopper, ‘Vitality’, which became a signature tune for Courtneidge and here is given lively staging. There is a coup in featuring a lady who was a 17-year-old chorus girl in the original cast of Gay’s the Word. Four years later she became an overnight star in The Pajama Game and then appeared in Damn Yankees (1957) and Irma La Douce (1959). She is Elizabeth Seal who here plays a temperamental Italian teacher, sharing a comically venomous number about despised pupils with three other veterans – Sands, Gaye Brown and Eileen Page. Also to be noted are Kirsten Cooke (a secretary with a touch of Joyce Grenfell) and the smugglers Paul Slack and Ben Stock, although they are stuck with a running gag about seating arrangements that is one of the show’s mystifying misfires.

Commentators at the time said it was Courtneidge who had kept the show running, and this production is fortunate in having the sparkling Dann. It can also be recommended for its place in the history of the British musical, the cast’s resilience, some terrific tunes and, yes, vitality.