Beethoven
Sonata in G-minor for Piano and Cello, Op.5/2
Shostakovich
Piano Trio No.2 in E-minor, Op.67
Schumann
Sonata No.1 in A-minor for Violin and Piano, Op.105
Mendelssohn
Piano Trio No.1 in D-minor, Op.49 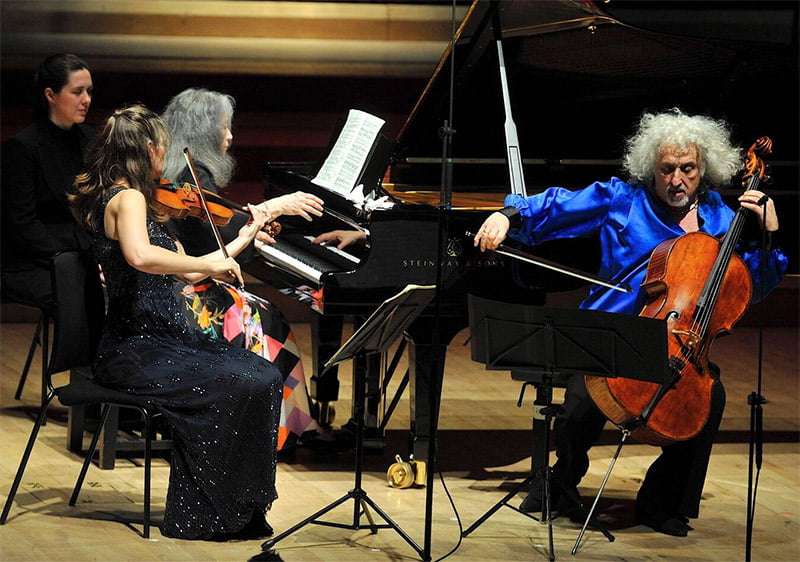 As rewardingly imagined programmes go this ranked high in the satisfaction stakes – even if it would have been welcome to hear the originally advertised Tchaikovsky Piano Trio. Joining the vintage partnership of Mischa Maisky and Martha Argerich, Janine Jansen brought a starry new light to the mix.

Carrying the evening, ever unflappable, Argerich proved remarkable, alert to all nuances, dictating pace and style, sensitive to every inflection of her partners notwithstanding fleeing whimsies of her own, a certain ‘let’s get on with it’ manner. Facility and fluidity aside, her dynamic range, tone and projection – areas too often these days misrepresented or tweaked artificially by engineers and producers – especially caught the attention. Melodies sang, running passages rippled like waterfalls in sunlight, octaves rang, chords – soaringly beautiful, plungingly powerful, endlessly voiced – defined magnificence. Nothing she did could not be heard: she made chamber music yet filled the room with crystalline sound. The discipline and pulse of her left-hand provision, unrushed and certain, did much to frame and stabilise proceedings.

Jansen has always been a player of lyric intensity and passion. She caresses her phrases with silken tone, her long lines and curving climaxes always singing and articulated. Yet, when needed, she can mount the most rasping and terrifying of attacks. The patter and poetry, crispness and base warmth, of her signature pizzicato is special. However much she might throw herself into the music (and she does), beauty of timbre and purity of intonation matters at every turn. Her tall elegance and the refined flow of her bowing action make for the moment. Her Schumann Sonata (starting the second half), a late work (all of four days in the composition), commanded the stage from the controlled hairpin of the very first bar, through paragraphs of fantasy, brilliance and rumination, to a visceral, thrillingly co-ordinated Finale, she and Argerich in lithe, athletic accord, relishing the toccata-like moto perpetuo passages.

By comparison, Maisky turned out to be the gruffer player on the night, more at ease in the Trios than early Beethoven. The G-minor Sonata had some rough corners, and the bullish Finale made for discomfort in places – reminiscent of Rostropovich in character but wanting in his authority (letting events and harmony breathe, Du Pré’s more measured compromise, Ma’s too, has to be surely the musically desirable option). For whatever reason, his instrument spoke with difficulty, the faster the notes the uneasier their production. Argerich though took every fence in her stride, identifying urgently with Beethoven the arrogant 1796 ‘Grand Mogul’ striding through the halls of Berlin and Vienna, challenging kings, princes and countesses. Her tenuto hairpins in the second and fourth bars of the first movement were little visions of attention. 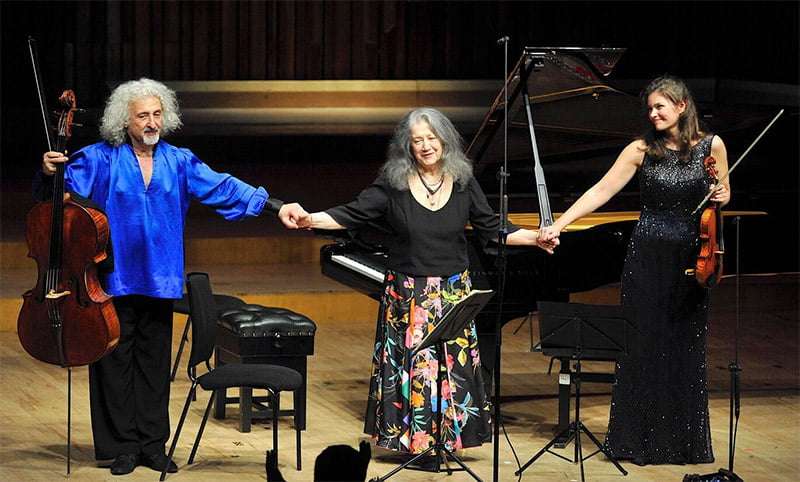 Following the interval, benefitting from needed attention to the Steinway, Mendelssohn’s D-minor Trio was a lesson in early Romantic playing, not lost, one hopes, on the many students and familiar faces in the audience. The final onslaught, thunderous and unanimous, was electrifying, high on adrenalin and abandonment – three players at the very top of their game. But other things equally arresting were to be had. For instance, the exquisite semplice phrasing and exchanges of the ‘song without words’ slow movement, in the opening eight bars Argerich reminding us of that cantabile and artistry which made her such a darling of the world fifty years ago. Her phrase-offs were beautifully gauged. Damselflies in the gloaming, the 6/8 Scherzo was a water-coloured elfin.

Traumatically engaged, bleak, torn apart, savage, Shostakovich’s wartime E-minor Trio earlier was the monument of the hour. Between them Jansen, Maisky and Argerich traversed the human spirit, sculpting a vast Symphony, laying before us darkness, anguish and bared klezmer lands. A performance for all time, organically bound and cross-referenced, the sense of theatre went well beyond the stage. The muted cello harmonics at the start; the snarling up-bow crescendos of the second movement (Jansen on edge, Maisky more laidback); the massive piano chording, the dynamic rise and fall, of the third (an electronic obbligato from thoughtlessly within the audience notwithstanding); the Finale’s pizzicato agogics, its relentless, roaring, heavily treaded entwinement of dance and march, the quite extraordinarily imagined and executed closing violin and cello arpeggiati – all left the strongest cinematic impression, the more draining for being so grainily monochrome, so devoid of colour except through the dustiest, iciest focus. That Maisky, giving the exertion of it all, was puffing by the end was hardly to be wondered at.

Orpheus placating a clamorous full house, the third (‘Duett’) of Schumann’s Phantasiestücke Opus Eighty-Eight made for a gentle encore after the Mendelssohn, Argerich in relaxed support, Maisky and Jansen in smiling, responsorial harmony.